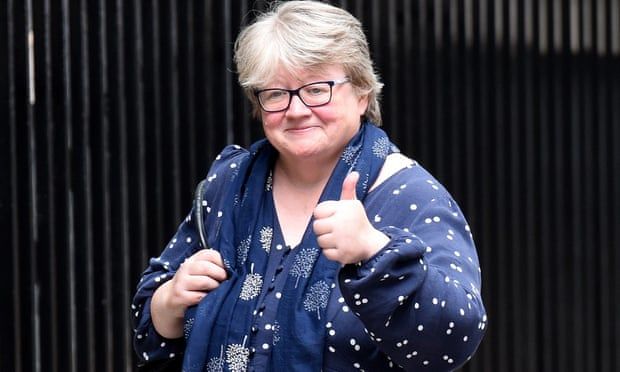 Thérèse Coffey is a beer, music and football-loving MP whose lively karaoke parties are the stuff of legend at Westminster. One regular attender has been her good friend Liz Truss, who has appointed the Suffolk Coastal MP as the new health and social care secretary – the third in just two months.

She is renowned as a work obsessive, even by parliament’s usual standards. “Her life is basically all about Westminster,” one colleague told the Sunday Times recently. Department of Health and Social Care (DHSC) officials should brace themselves for a very demanding new boss. Despite her reputation as a tough taskmaster, though, she is very popular with colleagues. “She is convivial and pleasant company, and fond of a few drinks,” one says.

Coffey, 50, was born in Lancashire, grew up in Liverpool, briefly attended Oxford University and then got a PhD in chemistry from University College London. She qualified as a chartered management accountant, had stints at a subsidiary of Mars and the BBC and stood unsuccessfully to become an MP and MEP. She became the MP for Suffolk Coastal in the 2010 election. A private person, she is unmarried, has no children and is close to her mother and sister.

A colleague says: “Her political views are of the free market and the hard right wing, including strong anti-abortion views.” But a Tory insider disagrees. “Her political worldview is very pragmatic,” they say. Friends say her Catholicism is also a key influence.

Someone who watched her closely over the last three years, during which time she has been the work and pensions secretary, observes that she “seemed to have no ambitions at DWP other than to retain the Osbornite architecture of austerity and reducing the value of benefits, and keeping the lid on any uncomfortable evidence that might undermine it”.

The same person adds that Coffey “can come over in public as harsh and lacking empathy”. That could prove damaging when talking in her new role about the many difficulties facing the NHS, given that health ministers need to show they understand the challenges facing patients and staff.

Her closeness to Truss has prompted reports in recent weeks that she was offered a number of roles. “She could have had her pick, given she’s so close to Liz. But it’s encouraging that she wanted to do health, given the dire state of the NHS. She must think she can turn things round,” said the Tory insider.

Coffey’s in-tray in daunting and fraught with political risk, especially given the increasing inability of the NHS to provide important care within longstanding timeframes. Jeremy Hunt, the health secretary from 2012 to 2018, said last week that the service was “facing the most serious crisis in its history”.

It is “in its worst state in living memory”, says the NHS Confederation chief executive, Matthew Taylor. A potential wave of strikes over pay by NHS staff, including by nurses and junior doctors, would pose acute difficulty for Coffey.

Her most pressing problems are the long delays facing ambulance crews waiting to hand patients over to A&E staff, patients’ difficulty getting GP appointments and the fact that about one in eight hospital beds in England is occupied by someone who is medically fit to leave – but cannot be discharged because social care is unavailable to keep them safe. However, every NHS service is struggling. In England, one in nine people is already on the hospital treatment waiting list.

What can Coffey do to turn things round? A huge cash injection is not an option, especially given Truss’s pledge to cancel the 1.25% rise in national insurance which began in April and was expected to yield £12bn a year for the NHS.

Staff shortages are worsening – vacancies in England shot up from 105,000 in March to 132,000 in June. But while both Theresa May and Boris Johnson promised to bring forward a strategy to tackle that, none has yet appeared.

How will she fare? A colleague opines: “I fear Thérèse is out of her depth in this job. I don’t have any idea how she will approach the job, and more worryingly I’m not sure she does either.

“She will need a good and experienced team of junior ministers and to heed counsel from senior NHS leaders if she is to make any sort of success of the job at a time of great crisis for our health service.”