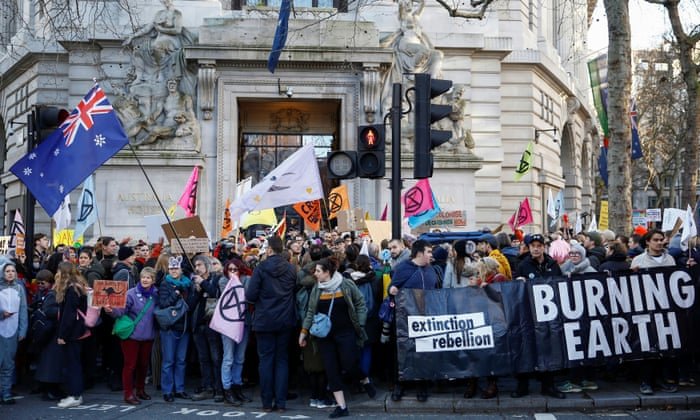 Exclusive: Police scramble to recall guide issued to teachers putting climate activists alongside far-right groups
Counter-terrorism police placed the non-violent group Extinction Rebellion (XR) on a list of extremist ideologies that should be reported to the authorities running the Prevent programme, which aims to catch those at risk of committing atrocities, the Guardian has learned.

The climate emergency campaign group was included in a 12-page guide produced by counter-terrorism police in the south-east titled Safeguarding young people and adults from ideological extremism, which is marked as “official”.

XR featured alongside threats to national security such as neo-Nazi terrorism and a pro-terrorist Islamist group. The guide, aimed at police officers, government organisations and teachers who by law have to report concerns about radicalisation, was dated last November.

It says that issues to look out for include people who speak in “strong or emotive terms about environmental issues like climate change, ecology, species extinction, fracking, airport expansion or pollution”.

In the guide, people are advised to listen and look out for young people who “neglect to attend school” or “participate in planned school walkouts” – an allusion to the school strikes for the climate, a global movement of which the activist Greta Thunberg is a lead proponent. Thousands of UK pupils, and millions worldwide, walked out of school last year in protest at government inaction on the climate crisis.

The disclosure that XR has been listed alongside proscribed groups such as National Action and Al-Muhajiroun is likely to be deeply embarrassing for counter-terror chiefs. They have for years faced claims that Prevent can cross the line to stifle legitimate free speech, thought and dissent.

When the Guardian first asked police about the document, officials said they would review the guidance to clarify their position on Extinction Rebellion. But following further questions, counter-terrorism police confirmed it had been circulated to “statutory partners” and had now been recalled. They said they now accepted that the protest group was not extremist.

The guide, bearing the counter-terrorism policing logo, urges those in “regular, direct contact with young people or members of the public” to look out for various warning signs and consider a referral to Prevent if they believe someone is falling prey to “ideological extremism”.

Setting out its purpose, the guide says: “This document is designed to help you recognise when young people or adults may be vulnerable to extreme or violent ideologies.

“Identification of any one of the signs presented here, in isolation, may not be indicative of vulnerability or radicalisation. However, in combination or in circumstances where they do not ‘fit’, they may indicate an individual at risk. In such cases, consider whether the individual is vulnerable to extremism and should be referred to the UK government’s Prevent programme.”

The guide runs through various extremist ideologies, and contains a whole page on XR.

Explaining why it is considered a threat, it states: “Anti-establishment philosophy that seeks system change underlies its activism; the group attracts to its events school-age children and adults unlikely to be aware of this. While non-violent against persons, the campaign encourages other law-breaking activities.”

It adds: “While concern about climate change is not in itself extreme, activists may encourage vulnerable people to perform acts of violence, or commit such acts themselves.”

The Guardian understands that counter-terrorism officials at a national level believe including XR in the guide was a mistake and insist they do not view its ideology as extremist. They say any such advice was issued by Counter Terrorism Policing South East (CTPSE) in the south-east of England and not in any other part of the UK.

In its first statement, CTPSE said: “This document was produced at a local level to help our partners to spot the signs of vulnerability to radicalisation. By including Extinction Rebellion in this document, it gives the impression we consider them to be an extremist group, which they are not. We will review the guidance to make this clear.”

Later, after further inquiries from the Guardian, police said they would recall the document.

DCS Kath Barnes, head of CTPSE, said: “I would like to make it quite clear that we do not classify Extinction Rebellion as an extremist organisation. The inclusion of Extinction Rebellion in this document was an error of judgment and we will now be reviewing all of the contents as a result.

“It was produced by CTPSE to assist our statutory partners – including police forces and government organisations – in identifying people who may be vulnerable as a result of their links to some organisations.

“The document was designed for a very specific audience who understand the complexities of the safeguarding environment we work within and who have statutory duties under Prevent. We are in the process of confirming who it has been shared with and recalling it.

“We as Counter Terrorism Policing, along with our partners, have a responsibility to protect vulnerable people. Officers are trained to spot those who may be vulnerable, and the membership of an organisation that supports environmental or animal welfare issues alone would not be a trigger.”

Extinction Rebellion is a global environmental movement with the stated aim of using nonviolent civil disobedience “in an attempt to halt mass extinction and minimise the risk of social collapse”. The group has won the backing of a range of MPs and celebrities.

A spokesperson for Extinction Rebellion said: “How dare they? Children up and down the country are desperately fighting for a future. Teachers, grandparents, nurses have been trying their best with loving nonviolence to get politicians and big business to do something about the dire state of our planet. And this is how the establishment responds.

“In a world of misinformation, where lies travel faster than the truth, we can’t help but wonder was this a deliberate attempt to silence a legitimate cause. Wouldn’t it be nice if they focused on the real extremists, the fossil fuel companies and those that do their bidding?”

In an online response to what the group called the “terrorism slur”, it also included objections from former police officers. Paul Stephens, a former detective sergeant with the Metropolitan police, said: “When are the police going to wake up? The climate and ecological emergency is the most serious threat to public safety in history and the longer this government fails to address it and continues to invest in fossil fuels, the greater the problem will be for the police. Who hasn’t criticised our system of government in recent years? Are we all extremists?”

The document from the CTPSE lists among ideologies to look out for that of the extreme right National Action, warning that followers idolise Adolf Hitler; and Al-Muhajiroun, which pledged allegiance to Islamic State and whose followers have carried out murders on Britain’s streets.

Those behind Prevent argue it is an important part of the fight against violent extremism, some say the most important, seeking to identify and divert people before they carry out violent attacks. In its early years it focussed mainly on Muslims and faced claims of impinging on freedom of speech and thought.

It has recently been beset by problems. The government set up a review of Prevent hoping it would help restore confidence but its chair, Lord Carlile, stepped down amid claims of bias and a replacement is yet to be appointed.

Some senior policing figures believe Prevent needs to be more community focussed. In August Neil Basu, the head of counter-terrorism, accepted mistakes had been made with Prevent as he stressed its continued importance: “It started off as a safeguarding, vulnerability programme. It was, in my view, badly handled.”

In September, the Guardian revealed a retired doctor who joined XR and took part in non-violent environmental protests was reported to Prevent by his NHS trust.

Police say XR’s protests have cost tens of millions of pounds, diverted officers from crime fighting and caused disruption to the public. The group recently won a case against the police in the courts when a ban on protests in London was ruled unlawful.
Add Comment