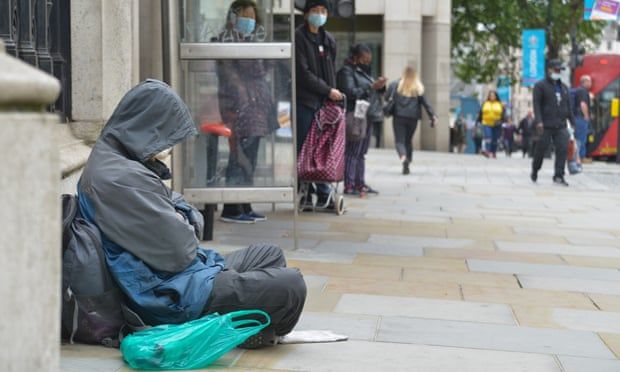 Data supplied by councils could be used to help remove foreign nationals from UK – either voluntarily or forcibly
Ten English local authorities have signed up to a controversial Home Office service that could lead to the removal of some migrant rough sleepers from the UK, the Guardian has learned.

A freedom of information response from the Home Office obtained by the Public Interest Law Centre has revealed that at least 10 councils have signed up to the Home Office’s Rough Sleepers Support Service between 15 September 2020 and 13 May 2021.

New government guidance published in April 2021 states that migrant rough sleepers could have their permission to remain in the UK refused or cancelled if they have “repeatedly refused suitable offers of support and engaged in persistent antisocial behaviour”. The guidance adds that such decisions should be “reasonable and proportionate”.

A letter from the immigration minister Chris Philp and minister for rough sleeping, Eddie Hughes, to council chief executives dated 21 April 2021 states that those with no right to be in the UK will be asked to leave voluntarily and “as a last resort we may consider enforcing their removal”.

A Home Office policy to remove EU rough sleepers was ruled unlawful by the high court in December 2017.

Some charities and local authorities worked with Home Office enforcement teams on identifying migrant rough sleepers and removing some of them from the UK prior to the policy being deemed unlawful.

Following the introduction of the new Home Office guidance in April of this year lawyers, charities and trades unions have raised the alarm that migrant rough sleepers might once again be rounded up and removed from the UK.

A new campaign to prevent this vulnerable group being deported – Support Don’t Deport – has been launched by the City of Sanctuary local authority network while some trade unions have drawn up a charter using the same tagline urging councils and homelessness charities not to provide cooperation and data to the Home Office that could enable these removals to take place.

A report launched on Thursday by Public Interest Law Centre – Still Here: Defending the Rights of Homeless EU Citizens after Brexit and Covid-19 – has identified some groups of EU citizens who will be particularly vulnerable to removal now that the deadline for EUSS applications has passed.

Those at risk include working-class people from eastern and central Europe, people of colour and victims of domestic violence. The report calls for a culture change and a rights-based approach to protect these groups.

Benjamin Morgan, research and communications coordinator at the Public Interest Law Centre, and the author of Thursday’s report, said: “With the EU settlement deadline now past, it is extremely concerning that the use of deportation as a ‘solution’ to rough sleeping among non-UK nationals has once again reared its head.

“Local authorities and commissioned charities need to think twice before cooperating with Home Office policies, such as the new rough sleeping rule, which are certainly unethical and which we believe are also unlawful. The homelessness sector needs to stand up for the right to shelter – and to remain in the UK – of all EU citizens, something which the government has singularly failed to do.”