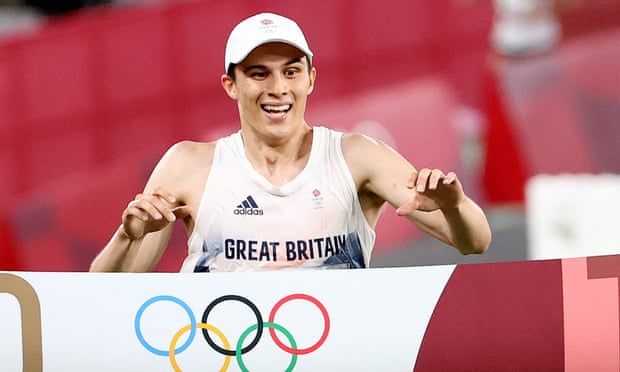 Team GB made it 20 golds in Tokyo on Saturday as boxer Galal Yafai and then Joe Choong in the modern pentathlon won their events. It guaranteed that the 2020 Tokyo Olympics would be Britain’s third-best gold medal haul since the 56 golds at the London Games of 1908. The team finished with 27 golds at Rio in 2016, and 29 at the London Games in 2012.

Birmingham’s 28-year-old Yafai claimed the flyweight title and Britain’s first gold in the ring. He floored Carlo Paalam of the Philippines in the opening round, then edged the split decision.

Having spent his early 20s working in a Land Rover factory, shifting boxes and detesting his work, after the bout he said: “Six years ago I took up boxing and thank God it worked out for me and shows if you work hard you can reap the rewards.”

Choong’s gold sealed a memorable double in the modern pentathlon, after Kate French’s win in the women’s event on Friday. Having swum, fenced and showjumped, Choong’s shooting accuracy and pace in the final 800m of the laser run allowed him to hold off a strong late challenge from Egypt’s Ahmed Elgendy. 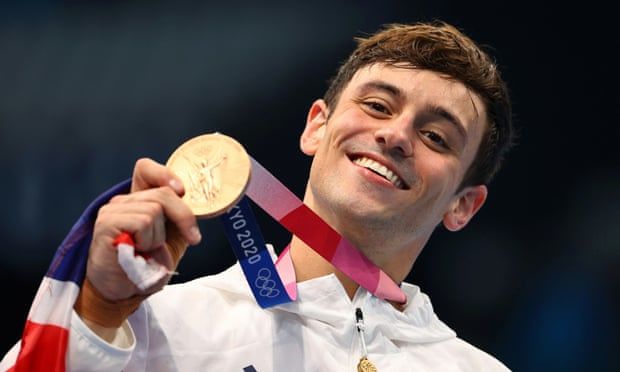 Tom Daley with his bronze medal.

Tom Daley described his semi-final performance as a “dog’s dinner” on the way to adding a bronze medal to his earlier synchro gold in the diving. The 27-year-old from Plymouth, who has been piling on social media followers with his poolside knitting exploits while raising funds for the Brain Tumour Charity in memory of his father, said afterwards he wished his dad could have been there: “He would be jumping up – he’d probably be in the pool by now!”

Cao Yuan won the 10m individual platform ahead of Daley, making it seven golds out of eight in the Olympic diving for China.

In the velodrome, Ethan Hayter and Matthew Walls won another track cycling silver medal for Team GB with a late storming finish in the men’s madison in the track cycling. Victory on the final sprint nudged them above the French team into second place. They could not catch Denmark’s Lasse Norman Hansen and Michael Mørkøv , though, who added the Olympic title to their world championship.

An exhausted Hayter then could not help himself let slip an f-word for the BBC’s Olympic breakfast viewers in his after-race interview.

Josh Kerr was also in the medals on Saturdayfor Team GB, adding a bronze in the men’s 1500m behind Norway’s Jakob Ingebrigtsen and Kenya’s Tim Cheruiyot. Kerr’s late lunge at the line was just four-hundredths of a second away from the silver medal.

Neeraj Chopra made history as he won the men’s javelin and claimed India’s first athletics gold, and while Indian hockey teams have won gold before, it was only his nation’s second individual gold. 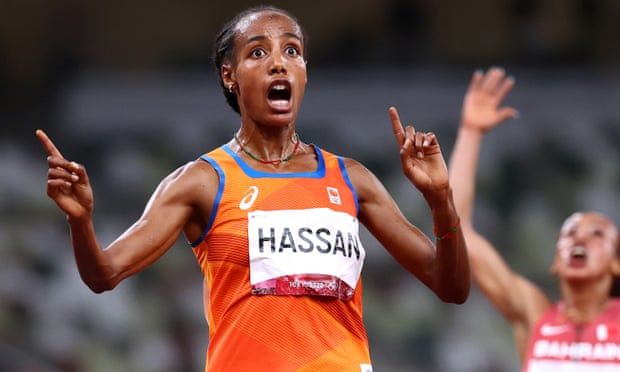 Sifan Hassan of the Netherlands.

In the Olympic stadium, the extraordinary Sifan Hassan of the Netherlands added the 10,000m gold to her previous 5,000m gold medal and 1500m bronze medals in her unprecedented assault on the women’s distance races. “I’m so happy and I cried during the medal ceremony,” she said. “I actually realised that I’m done, the Games are over. It’s not about how strong I am but how strong are the ladies I challenge. Now I’m happy, I’m done, it’s over.”

The final Saturday was strewn with gold medals for the USA, who dominated the last two races on the track – the women’s and men’s 4x400m relays. In the process, with her 11th medal, Allyson Felix became the most decorated US track Olympian of all time, eclipsing Carl Lewis. Britain’s women finished fifth.

There was a predictable victory for the USA’s men in the basketball – however, their 87-82 win over France was the narrowest margin in any Olympic basketball final since 1972. But there was an upset in the baseball, where hosts Japan took the gold in the Yokohama Baseball Stadium with a 2-0 win over the USA.

Having included a Beyoncé medley in one of her routines, Israel’s Linoy Ashram won the individual all-around rhythmic gymnastics gold medal. It broke a winning streak for Russia in the event that goes back to 2000. There was no ending Russian Olympic Committee dominance in the synchronised swimming, though. Svetlana Romashina became the most decorated artistic swimmer of all time, and said in an emotional press conference afterwards: “I can say that the sixth and the seventh medal were the most difficult in my life. I became a mother and it was very difficult to be mother and an athlete at one moment.”

Sweden won the team jumping event in the equestrian sports, ahead of a USA team that included Bruce Springsteen’s daughter Jessica. But the saga of Saint Boy, the horse that refused to jump for Annika Schleu in the modern pentathlon on Friday, took a darker turn on Saturday as the sport’s governing body, the UIPM, announced that German coach Kim Raisner had been thrown out of the Games for punching the horse, which had been randomly assigned to Schleu for the event.