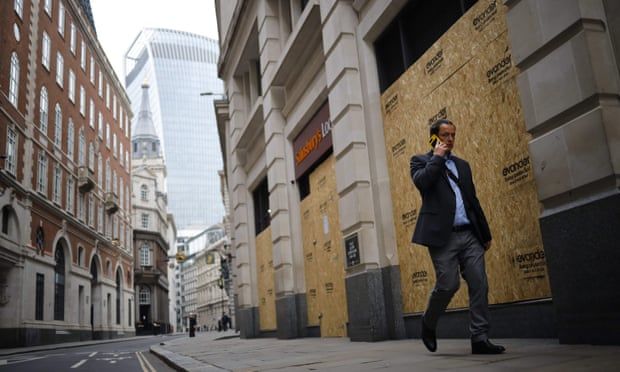 About 8% of borrowers – 130,000 firms – have so far failed to repay government-backed emergency loans
Taxpayers have been left to foot a £421m bill to cover soured Covid debts, after one in 12 businesses defaulted on state-backed emergency loans distributed at the height of the pandemic, official figures reveal.

In the first set of figures detailing the performance of government-backed loans offered to struggling firms during the outbreak, the Department for Business, Energy and Industrial Strategy said about 8% of 1.6m borrowers – roughly 130,000 – failed to repay their debts as of March this year.

The bulk of the claims – around £352m – were made for bounce back loans, the popular scheme which accounted for £47bn of the £77bn total lent to businesses through the programme.

High street banks and online lenders, which distributed the loans on behalf of the government, subsequently claimed a combined £421m of taxpayer cash to cover the defaults.

About 18,000 of the 1.5m bounce back loans claimed were flagged for suspected fraud by lenders, though no updated estimates were provided on the potential cost to the government. It has previously been estimated that fraud losses could top £4.9bn, though more recent estimates from PwC, the accountancy firm hired by the government, reduced that figure to £3.5bn.

“We are still early in the life of the schemes and in the lending cycle, so it is too soon to accurately assess levels of fraud and credit losses,” the business department said.

Defaults and fraud estimates, which are collected by the British Business Bank, are expected to change as more debts become due, with many firms having taken advantage of a programme allowing them to extend their loans over 10 years.

Bounce back loans, which were 100% government backed, were distributed by 28 high street banks and other lenders, with applicants able to borrow up to £50,000 each.

Launched in May 2020, the scheme was one of former chancellor, and now Tory leadership candidate, Rishi Sunak’s biggest interventions during the first months of the pandemic, as he attempted to safeguard the economy.

However, critics have claimed that not enough attention was paid to potential fraud, as customers were allowed to self-certify that they met certain criteria in an effort to get more money out the door.

Those concerns eventually led to the resignation of the anti-fraud minister Theodore Agnew in January, who cited the government’s “woeful” efforts to control fraud, and he has since warned banks to be “very careful” before claiming the government guarantee.

Lord Agnew later entered into a battle with digital Starling Bank, after raising questions around its fraud controls, claims the bank has denied. Starling has asked Agnew to withdraw his statement.

Metro Bank, Barclays and Starling Bank have claimed the most money to date on bounce back loans, with the government paying out £122m, £88m and £61m respectively.

However, the proportion of claims relative to their total loans varied, with Metro having claimed an estimated 8.5% of the total, while the amount claimed by Barclays and Starling totalled an estimated 0.8% and 3.8%, respectively.

All three lenders said they were dedicating significant resources to try to recover funds before claiming the state guarantee.

Two lenders – Tide and Capital on Tap – claimed back about a quarter of the total money they each lent to businesses through the bounce back scheme.

Tide said it conducted all appropriate checks and that it was quicker to put in claims than some of its peers. It also said that some of its customers were “younger” and therefore at higher risk of failure. Tide added that the next 12 months would offer a “better picture” of defaults across all lenders.

The government also warned against reading too far into the lender-by-lender data, saying some “may be more advanced than others” in submitting claims, “which could lead to figures being distorted”.