Independent think tank the Institute of Fiscal Studies said the richest 10% of households would gain the most.

But Chief Secretary to the Treasury Chris Philp said tax cuts for all would get the economy growing.

Chancellor Kwasi Kwarteng unveiled the biggest package of tax cuts in 50 years on Friday, including the scrapping of the top rate of income tax.

He also reversed the National Insurance rise from November; cut stamp duty for homebuyers; and brought forward to April a cut to the basic rate of income tax to 19p in the pound.

The measures will be paid for by a sharp rise in government borrowing amounting to tens of billions of pounds.

There was an immediate reaction in financial markets, as the pound sunk and UK stocks fell.

Speaking ahead of Labour's party conference, Ms Rayner called the plans "a very dangerous gamble on our economy and future generations".

"I don't accept the argument of trickle down economics - which is what this is - give those at the top loads more money and that will filter down to those at the bottom. That's not how it works."

She added the proposals were "grossly unfair" and would "saddle the next generation with more debt".

Arriving at the party conference in Liverpool, Labour leader Keir Starmer said the government had shown its "true colours" and the conference was "our chance to set out the alternative".

"It's a growth plan, and to get Britain growing we need to get rid of the burden of taxation. You can't tax your way to growth."

The announcements by Mr Kwarteng came after the Bank of England warned the UK may already be in a recession and raised interest rates to 2.25%.

Meanwhile, the IFS published analysis suggesting only those earning over £155,000 would see any benefits from the tax policies over the current Parliament, with the "vast majority of income tax payers paying more tax".

The think tank also said the chancellor was "betting the house" by putting government debt on an "unsustainable rising path".

IFS director Paul Johnson told BBC Breakfast: "If looked straightforwardly at people's incomes with these tax changes, the more money you have, the more you gain.

"In fact, because there was one big tax increase the chancellor didn't reverse - and that is the fall over time in the point at which you start paying income tax. If you take that into account, in three or four years' time, the only people gaining from this will be earning more than about £150,000 a year."

Responding, Mr Philp said the IFS analysis "involves speculation about what future budgets may do with the various tax thresholds".

"This wasn't a full budget - it didn't address the question of tax thresholds and I'm not going to get into speculation about what they might do in the future."

The Resolution Foundation, a think tank which focuses on those on low to middle incomes, said the package would do nothing to stop more than two million people falling below the poverty line, amid soaring living costs.

The package will also see London and south-east England "disproportionately" better off than those living in Wales, the North East and Yorkshire, according to the think tank.

Chief executive Torsten Bell, a former Labour adviser, said: "The backdrop to yesterday's fiscal statement was an ongoing cost-of-living crisis that will mean virtually all households getting poorer next year as Britain grapples with high inflation and rising interest rates."

Elsewhere, Tony Danker, director-general of the Confederation of British Industry (CBI), told Today the measures would not "suddenly unlock growth".

"Having borrowed £150bn to support an energy package, we have to grow faster, there is no alternative."

He added: "We need a broad-based plan for growth... Action on tax is necessary but not sufficient."

On Friday Mr Kwarteng said the UK needed "a reboot", adding: "I don't think it's a gamble at all. What was a gamble, in my view, was sticking to the course we are on." 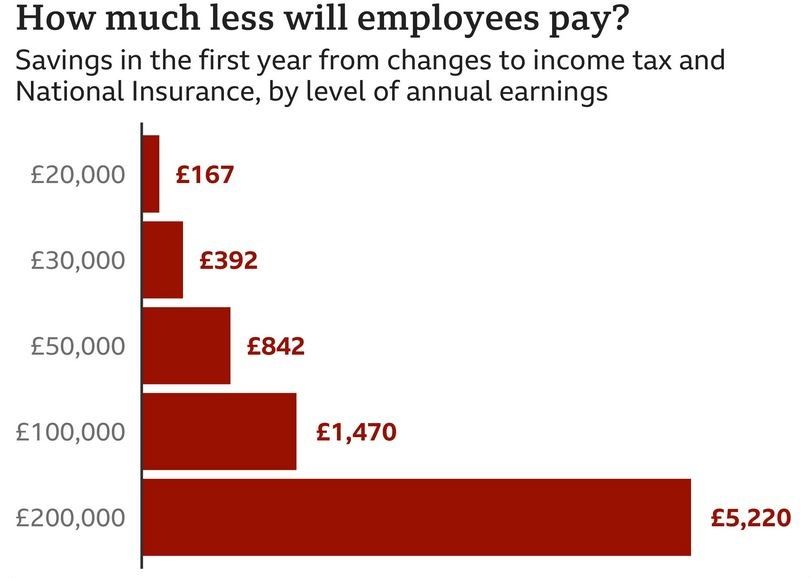 Angela Rayner: "I felt that it (the mini-budget) was casino economics"

Chief Secretary to the Treasury Chris Philp: "We are not into the politics of envy"