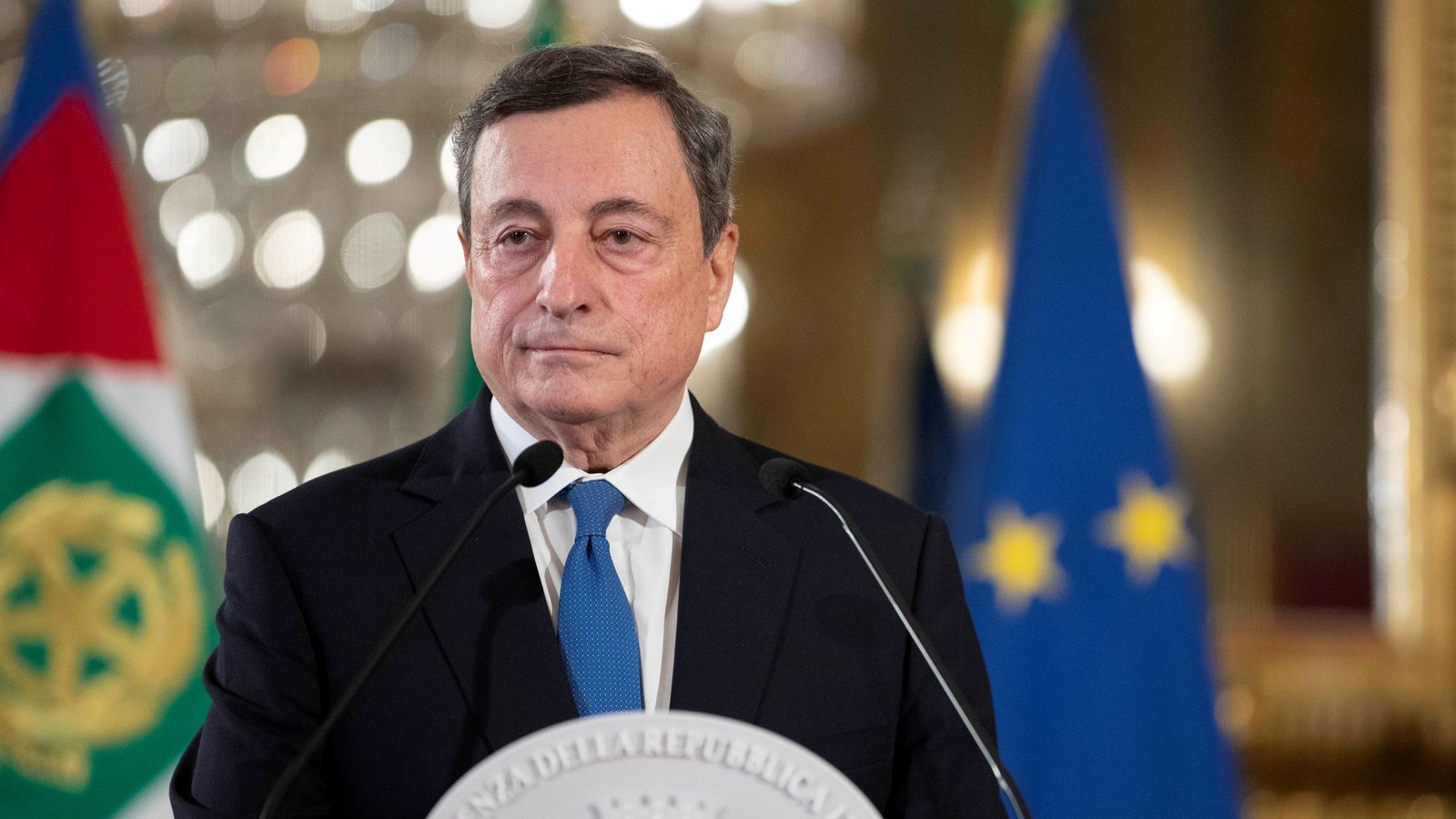 'Super' Mario Draghi sworn in as Italy's new PM - can he save its economy like he saved the euro?

Mario Draghi's life and career may have prepared him for becoming prime minister but he'll have to navigate treacherous waters.

In 2012, the Eurozone was facing an existential crisis, with the future of the euro itself in doubt.

Investors were seeking an ever-greater premium to lend to countries like Spain and Italy and there was real concern in European capitals that at least one country might have to be ejected from the single currency zone. Greece, in particular, was thought likely to default on its debts.

It is no exaggeration to say that one man, more than any other, prevented that from happening. 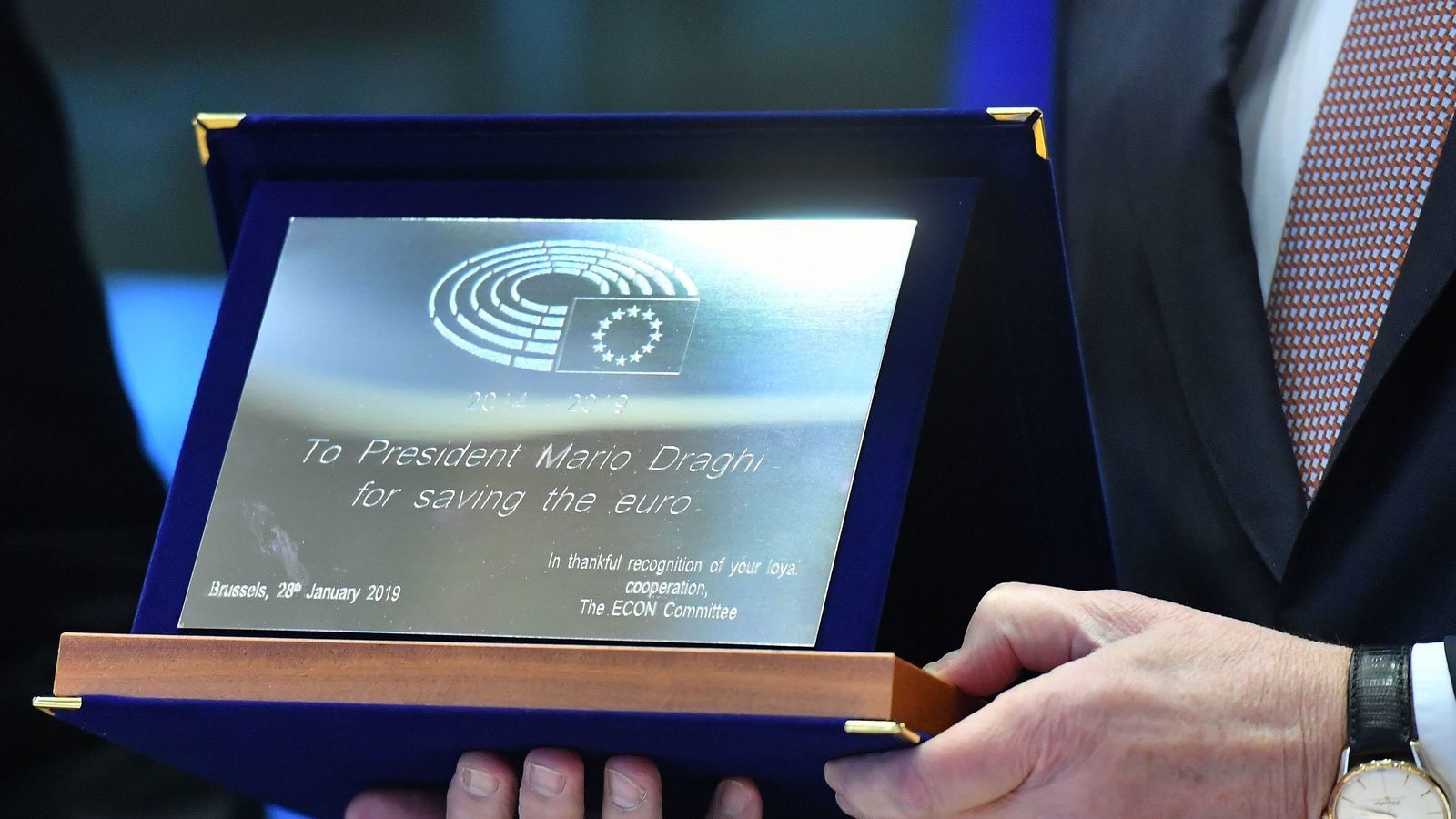 Mr Draghi, then ECB boss, receives a gift from European Parliament members in 2019

He telegraphed his intentions with a single phrase, uttered at a global investment conference at Lancaster House in London on 26 July, 2012: "Within our mandate, the European Central Bank is ready to do whatever it takes to preserve the euro. And believe me, it will be enough."

That man was Mario Draghi.

Astonishingly, his comment was unscripted - his way of trying to pour water on the wildfire of speculation that was blazing in Eurozone sovereign debt markets at the time. He did not actually have concrete plans in place, at the time, to tackle the crisis.

He later told the Financial Times: "I had reflected, consulted and deeply thought about the appropriate message."

But the third president of the ECB proved to be as good as his word.

That September, Mr Draghi launched a programme called Outright Monetary Transactions (OMT), under which the ECB bought bonds issued by governments in the Eurozone with a maturity of between one to three years.

The aim was to lower the yield of those bonds - effectively a measure of the return an investor wants for lending to a bond issuer - and to reduce the short-term cost of borrowing for the Spanish and Italian governments in particular.

This type of policy is something Europeans are now used to but, in September 2012, this was a revolutionary step.

Germany's powerful central bank, the Bundesbank, was furiously opposed to the idea on the basis that it would remove pressure on those governments to adopt the kind of austerity measures needed to bring down their deficits in such a way as to reassure the bond market.

To allay its concerns, conditions were applied to OMT that were as strict as those attached to the bailouts given to Ireland, Portugal and Greece. 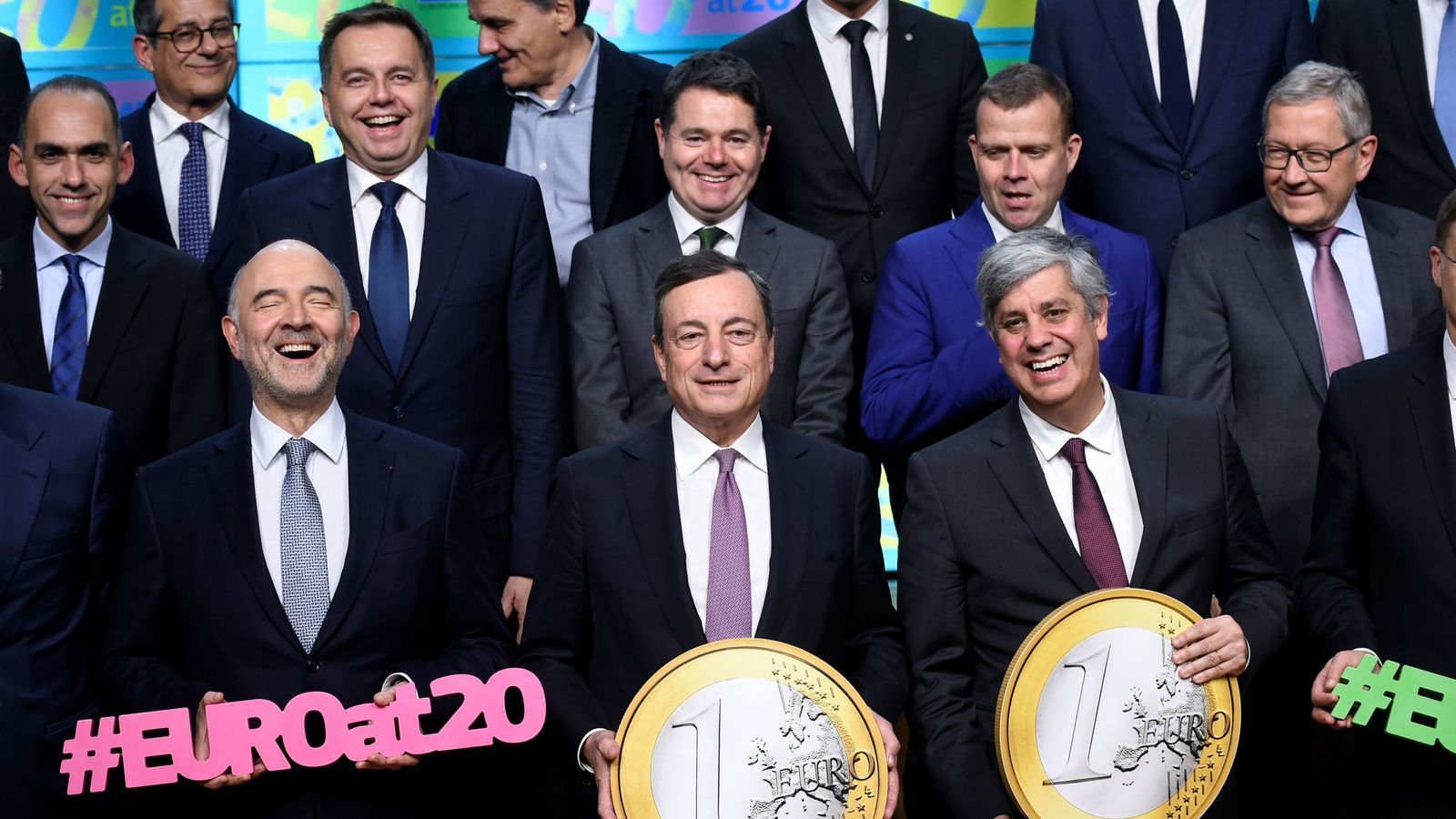 Mr Draghi, during his time as president of the European Central Bank

The Germans, historically the most inflation-conscious people in Europe following their disastrous experience with hyper-inflation between 1921 and 1923, also fretted this effective money-printing would unleash a surge in the cost of living.

Yet before long it became clear that deflation - a protracted fall in the price of goods and services - was the bigger threat.

Mr Draghi's response, in March 2015, was to launch a full blown programme of Quantitative Easing with mass purchases of both government bonds and corporate debt. Unlike OMT, which sought to bring down specific borrowing costs for particular countries, the aim here was simply to prevent deflation.

At its launch, the ECB promised to spend at least €1.1trn, but by December 2018, when it formally ended the programme, more than €2.6trn had been spent.

Mr Draghi, who was at the time preparing to hand over the reins to Christine Lagarde, announced in September 2019 that the scheme was being revived.

He also cut the ECB's main policy rate from -0.4% to -0.5% - incurring the wrath of Germany's politicians and the country's best-selling newspaper, Bild, which mocked up a front page picture of him with fangs and a cape as it raged that 'Count Draghila' was "sucking our accounts dry".

With the benefit of hindsight, Mr Draghi was generously taking unpalatable decisions towards the end of his tenure so that he would get the blame, rather than expose Ms Lagarde to clashes with the Germans early in her tenure.

Now the man who earned the nickname 'Super Mario' faces an immense task as he becomes the latest prime minister of his native Italy. 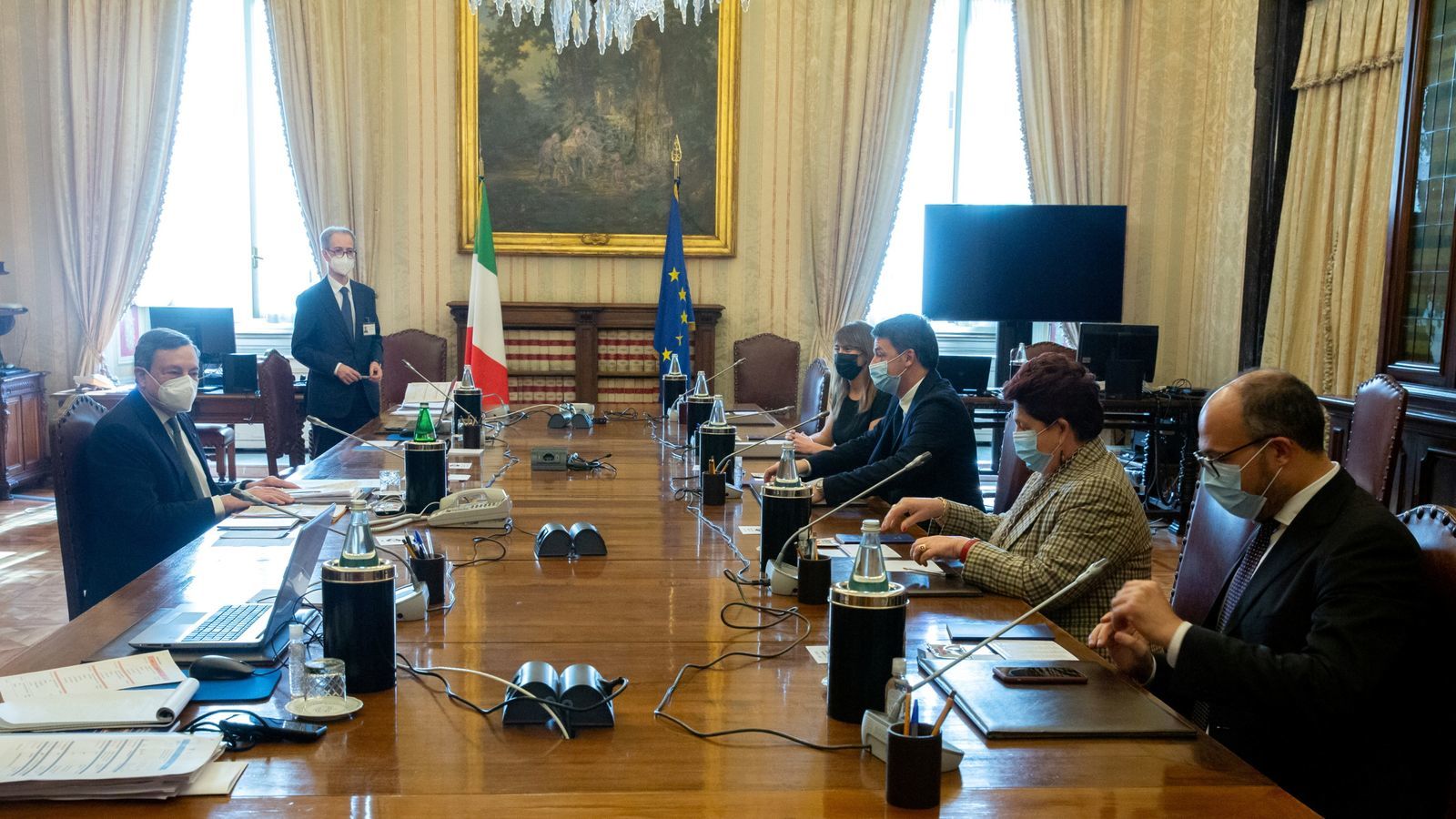 It was not something the father-of-two could have expected as he hunkered down during the COVID lockdown at his home in Citta della Pieve, near Perugia in Umbria.

In many ways, 73-year old Mr Draghi's life has prepared him for this moment.

Born in Rome - he supports AS Roma football club - he was just 15 when his father, who had worked for the Italian central bank, died. His mother died soon afterwards.

He told the German newspaper Die Zeit in 2014: "I can remember when, as a 16-year-old, I came back from holidays at the sea with a friend. He went home and could do what he liked.

"I, by contrast, was confronted with a stack of letters that I had to deal with, bills that had to be paid. But young people do not reflect on what they have to deal with and how they should do so. They simply get on with it.

"That is important, that is what prevents them from becoming depressed even in adverse circumstances."

It was just before 1968 - when students across Europe of his generation began rebelling against the system.

But not Mr Draghi, as he recalled to Die Zeit: "My hair was quite long, but not very long. And, that aside, I did not have parents whom I might have rebelled against."

Following his time at a Jesuit school and graduating in economics at La Sapienza university in his home city, Mr Draghi took a PhD at the Massachusetts Institute of Technology, where he was taught by no fewer than five Nobel Prize-winning economists.

His classmates included Ben Bernanke, later chairman of the US Federal Reserve and Paul Krugman, another Nobel Prize winner.

His five years in the US were followed by a glittering rise through the ranks of the Italian civil service, its Treasury and the Bank of Italy as well as a spell at Goldman Sachs, the Wall Street investment banking giant, before he succeeded Jean-Claude Trichet at the ECB in 2011.

Reforming Italy's economy and bringing order to its public finances, while at the same time bringing together the exotic mosaic of warring factions which characterise the country's dysfunctional political system, will be enormous challenges.

However, if anyone is capable of navigating those treacherous waters, it is the man who saved the euro.