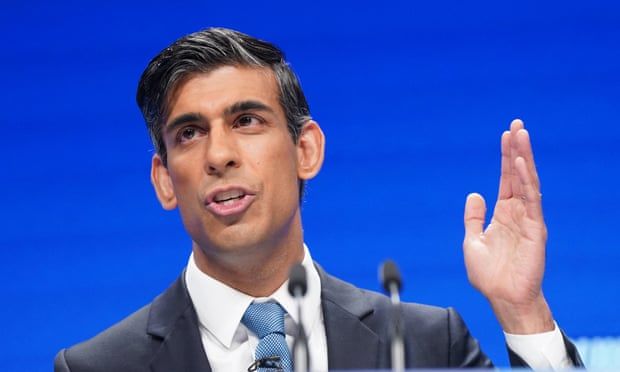 Exclusive: Chancellor said to not have opposed jab regime but warned of spending cuts or tax rises to pay for it
Rishi Sunak has issued a stark warning to Department of Health officials over the multibillion-pound cost of regular booster rollouts, the Guardian has learned.

Sources said the chancellor raised the point in several Covid meetings that a mooted three-month booster regime – more frequent than originally anticipated – could begin to impact on future spending.

A Whitehall source from outside the Treasury said Sunak had not opposed the measure but warned prices were likely to rise and that the cost to the exchequer should not be underestimated. They said the additional cost would need to be paid for in either spending cuts or tax rises.

“He made the point, rightly, that people would feel the effects of that spending in NHS and household budgets. These doses do not grow on trees,” the source said.

“Worst case scenario, if a new variant comes along or if Omicron doesn’t burn out, if we have to do this for years to come, that’s billions in costs that has not been foreseen which has to be paid for.”

The increase in national insurance, earmarked for NHS waiting lists but eventually aimed to help tackle the increased costs of social care, is expected to bring in £12bn a year which the Treasury could raid for additional cash for jabs.

This month, the government has signed contracts to buy 114m additional Pfizer/BioNTech and Moderna doses for 2022 and 2023. Those are in addition to the 35m additional doses of Pfizer/BioNTech that were ordered in August for delivery in the second half of next year.

Sunak is said to have raised the point most recently during Wednesday’s meeting about “plan B” measures that more regular booster doses were not built into current spending plans. Additional boosters, should they be required every three to six months, could cost an additional £5bn a year.

The UK does not disclose what it has paid for vaccines, citing commercial confidentiality. Reports have suggested a significant additional cost for the doses, after Pfizer raised prices because of increased demand.

In August, the Financial Times reported Pfizer increased the price of its Covid-19 vaccine by more than a quarter and Moderna by more than a tenth in the latest EU supply contracts.

A Treasury source said: “We are continuing to do whatever it takes to support our fight against Covid, including providing new funding to roll out our booster campaign as quickly as possible to protect people from Omicron. We will also ensure that taxpayers’ money is spent responsibly.”

Sunak is also facing the possibility of having to revive Covid support measures for businesses, which have not been reintroduced under plan B measures because firms are not required to close or enforce social distancing measures that can limit capacity.

Powerful business groups such as the CBI have not made public demands for further support – though footfall numbers have begun to drop and leisure and hospitality are likely to feel the effects of public caution.

The research group Springboard found footfall at UK high streets fell by 2.7% in the week to last Saturday. They had been expecting a Christmas shopping surge on Saturday but that did not materialise, suggesting that concerns over Omicron kept people away.

Demands from business groups, as well as MPs, are likely to increase if Boris Johnson needs to impose further restrictions – even if they do not include business closures.

Lobby groups are likely to argue that stricter social distancing measures or curfews would have a significant financial effect that would need to be compensated.

Sunak’s department was forced to defend itself over the weekend after it emerged that Treasury staff held celebratory drinks after the November budget, in contravention of lockdown rules in England.

A spokesperson said it was a “small number” of staff who celebrated around their desk and Sunak was not aware of the event.
#Boris Johnson  #Vaccines  #BioNTech  #COVID-19  #Johnson  #vaccine  #Pfizer  #Covid
Add Comment