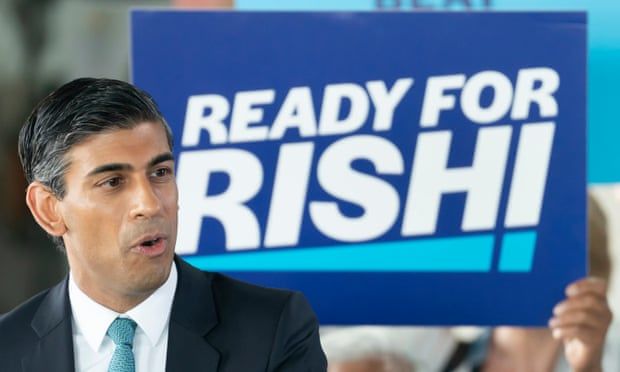 China is the biggest long-term threat to Britain, Rishi Sunak will say on Monday as he unveils plans to curb the country’s soft power by closing all of its 30 Confucius Institutes, which promote the teaching of Chinese language and culture, in the UK.

He will take on Liz Truss, his rival in the Conservative leadership race, by effectively accusing the foreign secretary and western leaders of having “turned a blind eye to China’s nefarious activity and ambitions” and call for a new Nato-alliance to be set up to counter it.

However, the latest front in the battle to replace Boris Johnson immediately saw recriminations from Truss supporters, with the former Tory party leader Iain Duncan Smith suggesting the announcement was tantamount to hypocrisy, as in the two years Sunak was chancellor the Treasury “pushed hard for an economic deal with China”. Duncan Smith has been on China’s sanction list since last year.

Sunak’s intervention threatens to further strain relations with Beijing, which have built substantially since the “golden era” only a decade ago. In a report on 14 July, the Chinese nationalist Global Times newspaper said although Beijing did not expect a sea-change in the bilateral relationship under Britain’s new leader, it still hoped the two sides could improve ties. It said Sunak had a “pragmatic view of developing balanced ties with China”.

The current government has taken a harder stance against Xi Jinping’s administration over the crackdown on civil liberties in Hong Kong, including a restrictive national security law and electoral reforms in the former British colony. Mutual sanctions have been in place over China’s treatment of Uyghurs in its far-western Xinjiang region.

In an attempt to move the focus in the Tory leadership race on to national security and international affairs, Sunak is expected to say on Monday that China “is the biggest-long-term threat to Britain and the world’s economic and national security”, citing the views of the director general of MI5 and head of the FBI.

“At home, they are stealing our technology and infiltrating our universities,” the former chancellor will say. “And abroad, they are propping up Putin’s fascist invasion of Ukraine by buying his oil and attempting to bully their neighbours, including Taiwan.”

Sunak will also criticise the Chinese government for “saddling developing countries with insurmountable debt and using this to seize their assets or hold a diplomatic gun to their heads”, as well as torturing, detaining and indoctrinating their own citizens in Xinjiang and Hong Kong.

In a slight against Truss, Sunak will add: “Enough is enough. For too long, politicians in Britain and across the west have rolled out the red carpet and turned a blind eye to China’s nefarious activity and ambitions.”

He said he will ban all 30 of China’s Confucius Institutes in the UK, claiming Beijing’s soft power is enhanced by taxpayer-funded Mandarin teaching in schools being channelled through the organisations.

The controversial bodies have been criticised before for influencing academic freedom in the UK, and have been called “outdated” by campaigners. They are effectively joint ventures between a host university, a partner university in China, and the Chinese International Education Foundation (CIEF), a Beijing-based organisation.

Sunak’s remarks on Confucius Institute are likely to contrast with Truss, who oversaw the signing of a memorandum of understanding between University College London’s education faculty and Hanban – an agency under China’s education ministry that used to be a partner in the scheme – when she was an education minister in 2014.

Further moves Sunak said would curtail Chinese influence included ordering British universities to reveal any foreign funding partnerships worth more than £50,000 and reviewing all UK-Chinese research partnerships that might “unwittingly assist” the country’s attempt to dominate technologies of the future or that could have a military purpose.

A Nato-style alliance would also be set up, Sunak pledged, along with moves to influence international standards on cybersecurity and help British businesses and universities counter Chinese industrial espionage with the help of MI5.

Truss’s campaign said she had been clear Britain should not become dependent on China when building critical national infrastructure, including projects such as Sizewell C and that she would update the 10-year foreign affairs strategy “integrated review” to include a chapter on Chinese and Russian aggression.

Ahead of the first head-to-head TV debate between the two candidates, Truss announced plans to focus on boosting freeports by scrapping Whitehall targets to let them choose their own favoured sectors and tailor incentives.

She also wants to introduce investment zones by creating new model towns similar to Bournville and Saltaire that will have fewer planning restrictions and lower tax burdens.

The Chinese embassy in London and the CIEF in Beijing have been contacted for comment.