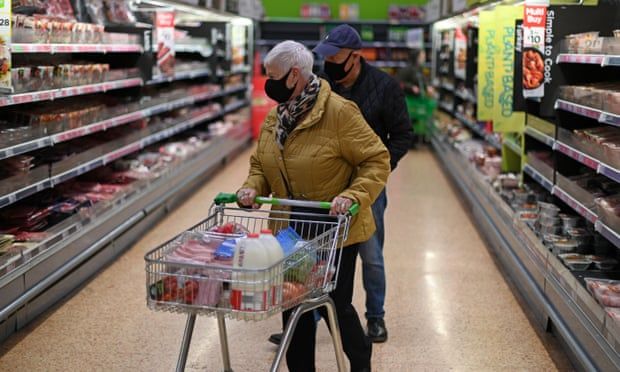 Lord Stuart Rose, the chairman of the UK’s third largest supermarket, said he welcomed the one-off payments announced by the chancellor, Rishi Sunak, on Thursday, worth a minimum of £400 for all households and up to £1,200 for the poorest, but said: “There is still going to be continuing pressure and a lot of toughness for people.”

The retail veteran, who previously led Marks & Spencer, Argos and Topshop, said he expected inflationary pressures to last into next year and take some time to gradually diminish, putting a squeeze on household budgets and therefore on retailers’ profits for months to come.

He said Asda was spending £90m attempting to keep prices low for its shoppers as he agreed with Marks & Spencer boss Steve Rowe’s assessment that life would get tougher for families and retailers in the autumn as heating and lighting bills increased.

Rising essential costs are putting a dampener on retail spending as families put fewer items in their baskets and look for bargains at discounters such as Aldi and Lidl, as they try to keep within household budgets.

Rose said the inflation problem could not be solved by consumer businesses or government alone but needed both to work with ministers, recognising it could be a long haul.

He said the priority should be “trying to get help to those who need it most”. “You can give me £400 but I don’t need that off my electric bill. It is hard to focus but you need to dig harder for those people who are more disadvantaged,” he said.

Rose’s comments came as it emerged that the average household’s disposable income sank by £40.38 a week in April, the largest fall in at least 14 years, as a sharp rise in energy bills ramped up the cost of daily essentials.

Average disposable income fell to £205 a week, the lowest figure since October 2008, as electricity prices soared 53% and gas 95%, according to the monthly Asda income tracker.

Despite Rose’s downbeat assessment, Sunak’s mini-budget triggered a stock market rally for high street retailers, reflecting hope in City dealing rooms that a burst of financial support would help to prop up spending across the British economy.

Retailers had warned the energy shock would cause a sharp drop in spending on other goods and services, raising the threat of a recession. Shares in retailers Ocado, Marks & Spencer, B&M and Primark owner Associated British Foods were among the biggest risers on the London stock market late on Thursday.

Kitty Ussher, the chief economist at the Institute of Directors, said what was good for household confidence would help the economy at large. Figures last week showed consumer confidence in Britain had plunged to the lowest level since the early 1970s, as families stared down the barrel of soaring energy bills hitting their personal finances.

“Whilst we would of course like to have seen direct help for business energy costs in today’s announcement, we completely understand that the priority should be to address the cost of living crisis for vulnerable households,” she said.

Shares in energy firms and utility companies were knocked, reflecting the anticipated £5bn hit across the industry from Sunak’s windfall tax, with SSE, National Grid and Centrica among the biggest fallers.

The share prices of energy firms BP and Shell rose, in a sign of the global scale of their operations and relatively small share of profits in the UK. Harbour Energy and EnQuest, which specialise in North Sea oil and gas production, fell after the chancellor’s address to the Commons.

A senior North Sea oil and gas industry source said: “This could have been worse, the level of the super deduction is significant. However, this won’t bring investment forward because it takes years to get licences and rigs – which are like gold dust at the moment – in place.”

“It sends the wrong signal to the whole sector at the wrong time against a backdrop of rising business taxation elsewhere. The government must work with business on a genuine plan for increasing investment and getting growth going again, particularly in areas like energy efficiency,” she said.

Nigel Pocklington, the chief executive of renewable energy company Good Energy, welcomed what he called “targeted, substantial and rapid support for those struggling in this crisis”.

However, he added: “We have seen the short-term problem addressed, but the way out of this energy crisis in the longer-term is with energy efficiency and clean, green homegrown renewables.”
Add Comment