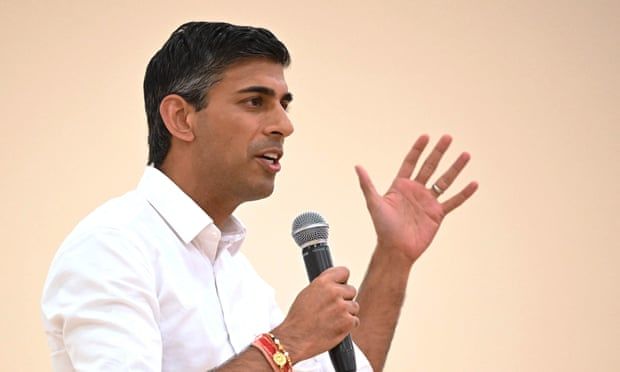 Liz Truss’s plans to curb the independence of the Bank of England could spook investors and “be bad for all of us”, Rishi Sunak has said as he continued to attack her economic policy.

Sunak, a former chancellor, said the government needed to “let the Bank of England get on with its job with interest rates”.

On Tuesday, he told Sky News: “I’m worried, quite frankly, by reports from others that they want to curb the independence of the Bank of England. I think that would be a mistake, and I think it would spook international investors into the United Kingdom and will be bad for all of us.”

With Truss firmly in the lead to be the next prime minister and less than two weeks to go, she has indicated she would review the Bank’s mandate.

Her ally Suella Braverman, the attorney general, has said the review would look at the Bank’s independence, having said it would examine “exactly what the Bank of England does, and see whether it’s fit for purpose in terms of its entire exclusionary independence over interest rates”.

Sunak warned about Truss’s plans for the Bank of England as well as repeating criticism of her plans for tax cuts, amid a further row about whether her economic policies would be accompanied by independent forecasts from the Office for Budget Responsibility (OBR).

Mel Stride, the chair of the Commons Treasury committee, urged the government’s economic watchdog to produce forecasts alongside any emergency budget this autumn, after Truss indicated she would try to avoid early scrutiny of her plans.

The Conservative MP said the chancellor must ensure that the OBR provided its assessment at the same time as the new prime minister made any big fiscal decisions.

Stride – who is backing Sunak – said the absence of forecasts would mean the new prime minister would be “flying blind” without the public being able to see an independent assessment of the government’s balance sheet.

“OBR forecasts provide transparency and reassurance to the markets on the health of the nation’s finances,” he said. “As a committee, we expect the Treasury to be supporting and enabling the OBR to publish an independent forecast at the time of any significant fiscal event, especially where, unlike other recent fiscal interventions, this might include significant permanent tax cuts.

“Whether such an event is actually called a budget or not is immaterial. The reassurance of independent forecasting is vital in these economically turbulent times. To bring in significant tax cuts without a forecast would be ill-advised.”

It was reported over the weekend that Truss had downgraded her emergency budget planned for mid-September to a more minor event to bring in tax cuts and set out her wider economic outlook. It would therefore not necessitate full OBR forecasts about the state of the economy.

However, with inflation expected by Citi to reach 18%, and energy bills forecast to top £6,000 annually next year, according to the energy consultancy group Auxilione, there are worries among some experts that the next prime minister will be basing decisions on out-of-date advice if there is no new information from the OBR.

Stride asked the chancellor, Nadhim Zahawi, to ensure the OBR was preparing forecasts of the UK’s fiscal position already, as the government usually gave it 10 weeks’ notice of a fiscal event, such as a budget.

The committee did not mention Truss’s campaign specifically. However, Stride told LBC: “At the moment the Liz camp are saying, I believe, that there will not be any OBR forecast produced at that time and that is kind of like flying blind.”

Sunak’s campaign has repeatedly called on Truss to “come clean” about how her proposed tax cuts, including reversing the rise in national insurance, would be funded and said her plans to borrow to fund tax cuts were “dangerous”.

He told the BBC: “Liz’s plans are promising the Earth to everybody. I don’t think you can have your cake and eat it. I don’t think life is that simple, and I think her plan risks making everything worse.”

Truss has argued that tax cuts will help to grow the UK’s economy and boost prosperity.

A Truss campaign spokesperson said: “The cost of living crisis means immediate action is required. A Truss government would seek to act as soon as possible to help people across the UK, by cutting taxes and introducing a temporary moratorium on energy levies.”