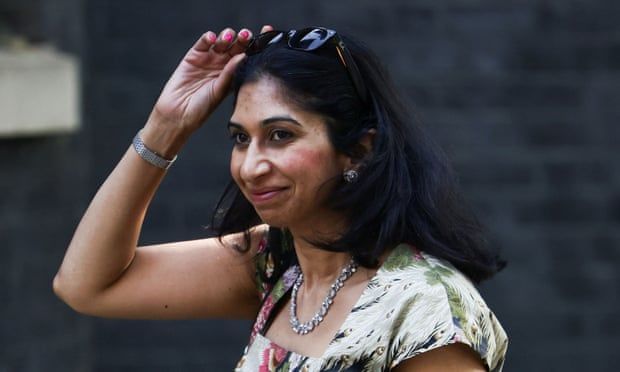 Attorney general declared the donation from company owned by Terence Mordaunt, who chaired the climate sceptic thinktank Global Warming Policy Foundation
Suella Braverman received £10,000 from a company owned by a leading climate denier to support her campaign for the Conservative leadership, according to the most recent update to the register of MPs’ interests.

The attorney general, who came sixth in the leadership race, declared a donation of £10,000 from First Corporate Consultants Ltd, which is owned by the Bristol Port owner Terence Mordaunt.

Mordaunt chaired the Global Warming Policy Foundation (GWPF) between 2019 and 2021. The GWPF has been vocal in its opposition to climate crisis policies such as net zero and was sanctioned by the Charity Commission in 2014 for failing to adhere to rules on “balance and neutrality”.

The figures also show that Tom Tugendhat received more than £120,000 to fund his leadership bid. Some £42,673 came from a company called Policy Focus Ltd, founded on 27 June, less than two weeks before the leadership campaign began.

MPs have 28 days from accepting a donation to declare it to the parliamentary standards commissioner and so some of the candidates in the contest have revealed little or nothing yet about the funding they have received. But PA Media has summarised what declarations have been declared.

Rishi Sunak has declared the donation of office space, valued at £3,195. Liz Truss, Penny Mordaunt, Sajid Javid, Jeremy Hunt and Nadhim Zahawi are yet to declare any financial support for their campaigns.
Add Comment