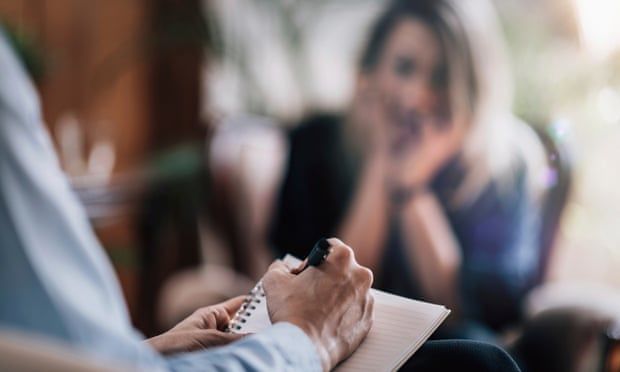 Exclusive: figure for England is in addition to official waiting list of 1.6m people as pandemic takes toll
An estimated 8 million people in England with mental health problems cannot get specialist help because they are not considered sick enough to qualify, NHS leaders have revealed as the toll of the pandemic is laid bare.

The figure, drawn up by mental health trusts and NHS Providers, underlines the gap between the growing need for care for anxiety, depression and other mental health problems, and the ability of the NHS to treat them.

It is in addition to the official waiting list for NHS mental health care, which stands at 1.6 million people, including 374,000 under-18s.

NHS England is understood to view the figure of 8 million, which is based on the known prevalence of mental health conditions and the thresholds dictating who gets access to treatment, as an accurate assessment of the number of those who are missing out on care because services are already so busy, especially given the Covid pandemic’s damage to mental wellbeing.

Saffron Cordery, deputy chief executive of NHS Providers, which represents England’s 54 specialist mental health trusts, said: “These estimates are dismaying. It is deeply concerning that around 8 million people are struggling with their mental health but are unable to access care because they are not yet deemed to be unwell enough.

“This shows the extent to which, sadly, NHS mental health services, despite significant improvements, are still unable to give people the immediate care and support they need. Behind every one of those 8 million is an individual who would benefit from treatment. This is the treatment gap we urgently need to close.”

She added that services were overstretched before the pandemic, but said: “Covid-19 has given rise to new need and exacerbated existing challenges, meaning that demand is significantly outstripping supply, which means that people need to wait longer and be more unwell before they are referred for treatment. The challenge now confronting mental health services is enormous.”

The 8 million includes people suffering from bipolar disorder, psychosis and mental health problems related to pregnancy and childbirth, as well as those who have self-harmed or had suicidal thoughts.

They include those who would usually be referred for talking therapy, either face-to-face or online; receive support from a community mental health team; get psychological help in school; or be treated by an eating disorders or crisis mental health team.

NHS Providers says the amount spent on mental health care in England needs to rise from £14.3bn to at least £17.15bn from next year to help cope with spiralling demand. “As a minimum, the mental heath sector needs [an additional] £850m a year to treat at current levels and deal with the backlog, plus a minimum of £2bn to deal with the most urgent capital demands [for upgrading units and building new facilities],” said Cordery.

One mental health chief executive said their trust was facing an “unrelenting” demand for care from troubled children and young people, especially for eating disorders.

NHS Providers’ plea for more mental health funding comes amid ongoing discussions between NHS England and the Department of Health and Social Care (DHSC) and the Treasury about how much the health service’s budget needs to rise by in this autumn’s comprehensive spending review. NHS sources say talks are “proving difficult”, with the Treasury determined to limit the increase.

NHS England recently unveiled plans to bring in five new waiting times standards intended to give people much quicker access to mental health care. However, there are doubts as to whether the health service has enough staff to deliver on the pledges, which include care for those in urgent need within one, four or 24 hours.

A spokesperson for NHS England said: “The Covid pandemic has had a significant impact on people’s mental health and NHS staff are going above and beyond to treat more patients than ever before. We remain committed to expanding and transforming mental health services in line with the NHS Long Term Plan, and earlier this year we consulted on new mental health access standards to help drive even more improvements in mental health care.”