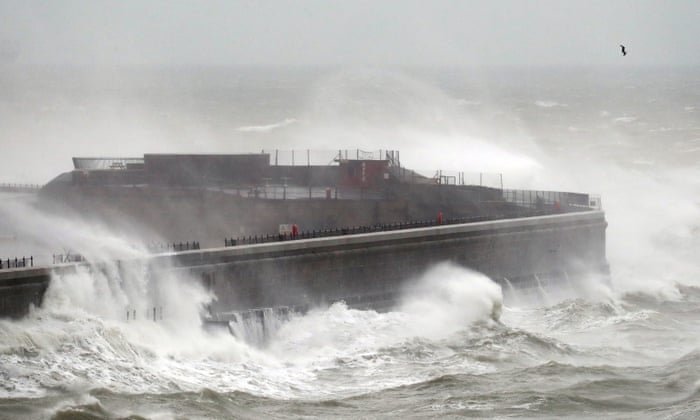 Amber wind warnings in place across the south and ‘blizzard-like conditions’ expected by next week
Storm Ciara is expected to hit the UK this weekend and bring winds of up to 80mph to coastal areas.

The Met Office has warned of travel disruption and potential power cuts in some areas on Sunday.

Forecasters said the storm would bring unsettled and disruptive weather on Saturday night and Sunday. Travellers can expect delays to bus and train services and possible road closures.

Rail passengers have been advised not to travel on Sunday in parts of the UK. Speed restrictions of 50mph have already been imposed on the east coast line between London and Scotland, with slower trains meaning half of services have been cancelled in advance. LNER said passengers with booked tickets could travel on alternative dates or get a full refund without charge.

Network Rail has said passengers across the country should check their trains are running on Sunday and Monday as the storm hits. Engineering works may overrun and lines are likely to be blocked by falling trees or other debris. Network Rail has urged people living close to rail lines to ensure garden furniture and trampolines are tied down.

Rain is also expected in Northern Ireland and Scotland from the late afternoon as conditions become increasingly cloudy. “It’s the beginning of the first part of Storm Ciara rising,” said the Met Office forecaster Simon Partridge.

For the rest of the UK, the weather will take a sharp turn from Saturday night into Sunday morning when Ciara arrives.

“It will be a wet and windy day across the whole of the UK on Sunday,” Partridge said. “The whole of the UK is covered with yellow wind warnings, which means gusts of 50-60mph regardless of where you are, and potentially up to 70mph in coastal areas.”

There is an amber wind warning across Hampshire, Sussex, Surrey, and Kent, where gusts could reach 70-80mph on the coast.

The Met Office has already issued warnings for the whole of the UK on Monday and Tuesday, when it is expected to be windy with a mixture of sunshine and showers.

Strong winds and heavy snow are expected to cause travel disruption in Scotland and Northern Ireland, where areas above 150 metres can expect to see 1-3cm of snow, while those above 300 metres could see 5-10cm.

Ciara is the third named storm of the 2019-20 winter season after Atiyah, which hit on 8 December, and Brendan, on 13 and 14 January.
Add Comment