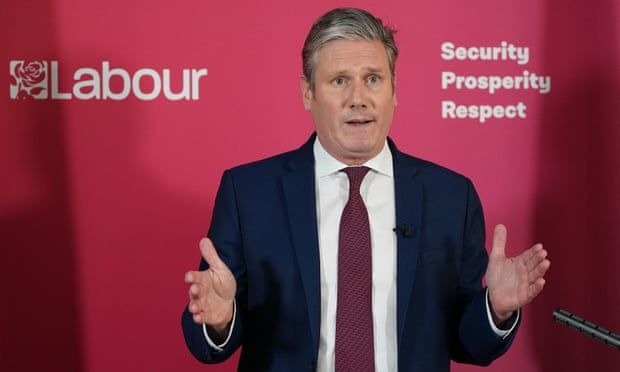 Focusing on honesty and decency was always going to be a thin strategy when Britons needed policies to address spiralling bills and rising poverty
For Keir Starmer’s team, Beergate has proven to be a bonfire of delusions.

It may well be that Durham police, which took no action over Dominic Cummings’ eye-testing sojourn to Barnard Castle, absolves the Labour leader over lockdown beers and curry after a campaign event last year. Even so, this episode offers salutary lessons. The whole shtick of Starmer’s team is that the grownups are back in the room. Jeremy Corbyn and his team, they believed, were fundamentally bad at politics, and brought rightwing media attacks on themselves, the thrust of which Starmer’s team believed were largely justified anyway.

And so, the plan? Place a knight of the realm – a former director of public prosecutions at that – in the top job, surround him with seasoned political professionals, punch left with gleeful abandon, and rid the party of any radical policy aspirations, thus neutering the sense that Labour represents a dangerous challenge to the status quo. They sought instead to make his dividing lines with the government competence and honesty, a seemingly easy feat when your opponent has all the integrity of a soggy beer mat. What could go wrong?

Well, quite a lot, actually. Up until now, Starmer’s team has enjoyed the easiest ride from the British media of any Labour leader since Tony Blair, and yet the first serious, sustained attack from the rightwing press is threatening to engulf them. Indeed, Starmer’s faltering media performances under pressure do not bode well for a general election campaign in which the Tory party and press will behave like uncaged lions.

Labour’s current plight partly arises from an unheeded past lesson. Upon assuming the leadership, focusing on competence may have seemed the obvious bet for Starmer, but this advantage was soon undermined by the successful vaccine rollout. It would have made sense to pivot to a transformative vision to tackle the cost of living crisis, but Starmer’s team concluded that they could bet the house on integrity and decency instead.

Nothing that Starmer is accused of comes close to the misdemeanours committed in Boris Johnson’s No 10. That pattern of behaviour was a brazen insult to relatives of the pandemic’s victims, and took place under a more severe lockdown than the step 2 restrictions in place in Durham in spring 2021. The problem for Starmer isn’t actually Johnson’s behaviour, but rather the fate of Rishi Sunak. The chancellor’s prime ministerial ambitions were essentially terminated because he turned up early to an official meeting and ate some birthday cake. Sunak was fined for this really very minor transgression, and Starmer’s position was that he should resign. By imposing such a low threshold for resignation – and bear in mind the Labour leader called for Johnson’s resignation simply for being under police investigation, now his own predicament – Starmer dug himself an avoidably deep pit.

His team may believe this all terribly unfair – and they are right. The whole saga of politicians’ lockdown restriction violations has acted like a clarifying flare, exposing how media outlets arbitrarily decide when an event becomes a scandal. Johnson’s now infamous birthday party was reported at the time in the Times, yet was only portrayed as wrongdoing 18 months later. Footage of Beergate circulated for months on social media before the Tory press decided it was useful fodder in the run-up to local elections. But there is nothing Starmer can do about the unfair media ecosystem he finds himself in – as he has now presumably discovered, given all he has done in his leadership to placate the press. If he had focused on eye-catching, cut-through policies to raise living standards – rather than fiddling around the edges with modest cuts to energy bills – he would not find himself so exposed.

It would be truly perverse if Starmer were forced to resign over a small dishonesty regarding a takeaway curry – given the much larger political dishonesty of which he’s guilty. What am I referring to? It is true that Johnson is on another planet when it comes to lying. But his premiership is broadly consistent with what he promised in his Tory leadership and general election campaigns – the hike to national insurance being a glaring exception. Starmer, on the other hand, ran for the leadership of the Labour party on what must be one of the most duplicitous campaigns in modern British political history. His offer was radical (and popular) domestic policies combined with party unity: Corbynism without Corbyn. He now offers Blairism without Blair. It would have been as if Johnson used his 2019 election victory to rejoin the EU.

But Starmer’s transparent political dishonesty has been ignored – because those on the receiving end were ordinary members of the Labour party and the party’s left, who are not regarded as legitimate political actors. His most generous cheerleaders are largely not interested in the substance of politics, but aesthetics and style. Their main objection to Johnson’s government is that it is uncouth and embarrassing, and they have projected on to Starmer the integrity and decency that they hanker after. Like many of Joe Biden’s most militant champions in 2020, they simply hope he will make politics boring again, a dream that, to put it gently, has not been realised across the Atlantic.

Again, perhaps Starmer will survive all this, even as he declared in a Monday afternoon press conference that he would resign if issued with a fixed penalty notice – placing the fate of the leader of the opposition in the hands of the Durham constabulary. He has left himself some wriggle room if the police find, like Cummings, he may have violated the regulations but issue no fine. Whatever happens, this episode has underlined the fatal weaknesses of his operation. His team has avoided making the argument for transformative policies, which this country vitally needs, because even if they believed them to be politically desirable they fear that doing so will invite a media onslaught. But it didn’t matter; the press has unleashed mayhem on him anyway. If only his team had read more Greek tragedies, they’d have learned that hubris is invariably followed by nemesis.
#Boris Johnson  #Joe Biden  #Johnson  #vaccine
Add Comment