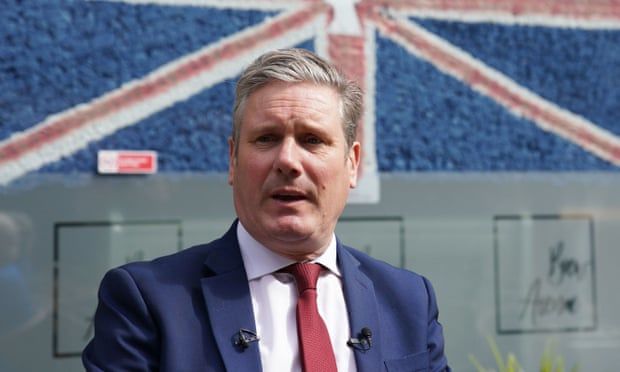 Labour leader says he will rebuild trust with EU and get ‘a better deal for the British people’
Keir Starmer has thrown Labour back into the Brexit debate by ruling out any return to the single market or customs union, but arguing he could remove trade and travel barriers as prime minister because the EU would trust him.

In a speech on Monday evening that ended Labour’s habitual silence on the subject since the referendum, Starmer pledged to tackle what he called a “fatberg of red tape and bureaucracy” caused by Johnson’s Brexit deal.

Starmer cast himself as an “honest broker” able to reach better compromises on key areas of disagreement with the EU such as the Northern Ireland protocol.

Although both sides wanted to reduce trade barriers between Northern Ireland and the rest of the UK, the government’s approach had “eroded” trust in the UK, Starmer told the Centre for European Reform thinktank.

“Labour will change that,” he argued. “We will be the honest broker our countries need. We will get the protocol working and we will make it the springboard to securing a better deal for the British people.”

But the Labour leader argued that the big questions over EU membership, notably over the single market, customs union and free movement of people, were “arguments of the past”, and could not be revisited.

While the shadow foreign secretary, David Lammy, made similar points in a speech on Brexit last month, Starmer has faced criticism from some within Labour for appearing wary of attacking Johnson over the issue, in part because of his own political journey on the subject.

Having previously pushed for a second referendum, while campaigning to be Labour leader in 2020, Starmer called for the return of free movement, then reversing his position a year later.

The speech on Monday brought criticism from the SNP and Greens, but pro-EU Labour backbenchers praised Starmer’s approach, saying the only option was to try to make the current deal function better.

The Labour leader set out a series of proposals to “make Brexit work”, notably over Northern Ireland, including a new veterinary agreement for agri-product trade, and a system for low-risk goods to enter Northern Ireland without checks.

Other proposals include a scheme for the mutual recognition of professional qualifications with the EU and a new policing and security arrangement with Brussels.

The plan also offers “flexible labour mobility arrangements” for people making short-term business trips between the UK and EU, and for musicians and artists embarking on tours.

The current deal had “created a hulking fatberg of red tape and bureaucracy, one that is hampering the flow of British business”, Starmer said. “We will break that barrier down, unclog the arteries of our economy and allow trade to flourish once more.”

Ben Bradshaw, the Exeter MP and former minister who is a leading pro-EU voice in the Labour party, said Starmer’s approach was “absolutely right”.

He said: “There is no prospect of us rejoining the EU, single market or customs union anytime soon, not least because [Boris] Johnson has so completely destroyed trust with our European neighbours that any such move would be on far worse terms than those we had before we left.

“There is, however, plenty that we can do to reduce the enormous damage being done to our economy and our relationship with our allies, by fixing the many problems with Johnson’s botched Brexit deal.”

Hilary Benn, who formerly chaired the Brexit Commons committee and was another strong proponent of a second referendum, told BBC Radio 4’s the World at One that even rejoining the single market would require a public vote.

“And I have tell you, in my view there is absolutely no appetite for that whatsoever,” he said.

Sarah Olney, the Lib Dems’ trade spokesperson, said Johnson’s deal, which Labour voted for, had done significant damage, and there was a need for “a pragmatic approach that works for the UK”.

In contrast, the SNP said Starmer “has strengthened the case for independence by embracing the Tories’ hard Brexit”, while the Greens said it was “quite perverse of Keir Starmer to stick his head in the sand and insist he will make Brexit work”.
#Boris Johnson  #Johnson
Add Comment