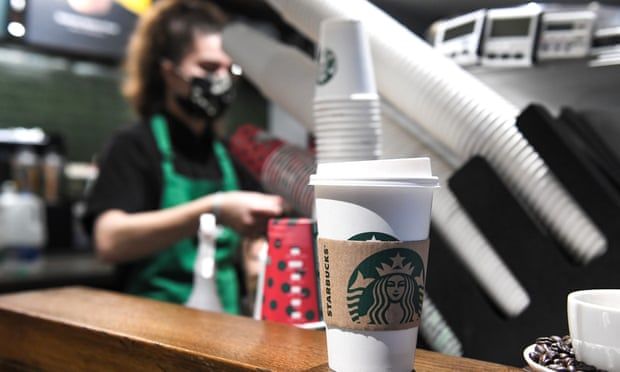 The company, which has faced years of heated criticism for paying very little tax in the UK, paid out £26.5m in royalty payments, almost five times as much the UK tax it paid, according to accounts filed at Companies House.

The royalty payments helped Starbucks, which is run by the billionaire Howard Schultz, make a global profit of $4.9bn (£3.7bn) in the same period.

The UK division collected sales of £328m from its 1,000 UK stores in the year to 3 October 2021, up from £243m in the previous year when shops were temporarily closed during the pandemic lockdown.

Starbucks Coffee Company (UK) made a £95.1m “gross profit” for the year, but after swallowing “administrative expenses” of £78m, its pre-tax profits were reduced to £13.3m, on which it paid £5.4m tax. A year earlier the company received tax credits of £4.4m after recording a pre-tax loss of £40.9m.

The UK arm of Starbucks has made cumulative losses after tax of more than £100m between 2010 and 2021, according to a Guardian analysis of its accounts. It reported a profit in only five out of 12 years, but tax experts say it is unclear whether they are a true reflection of the business.

Paul Monaghan, the chief executive of the Fair Tax Foundation, said: “Starbucks’ main UK subsidiary maintained its tradition of paying little corporation tax in the UK, and this was once again down to the payment of hefty royalty and licensing fees to entities further up the corporate group.

“The numbers now have a certain predictability.”

The company declined to comment on the royalty payments or the reasons for its very low pre-tax profits in the UK.

Starbucks Europe, the Middle East and Africa (EMEA) collected royalty payments of $237m in the year to 3 October. It made a pre-tax profit of $190m, and paid $13.1m in tax.

The company said the tax payment was low because “this dividend income has already been taxed in other jurisdictions before it is booked for accounting purposes as a profit in Starbucks EMEA Limited. As the income has been taxed already, it is exempt from further UK corporation tax charges.”

Starbucks EMEA, which collects royalties from 43 countries including the UK, has built up shareholder funds to more than $2tn.

Starbucks Corporation, the US parent company, made an “operating income” profit of $4.87bn in the year to 3 October 2021, on sales of $29bn.

Shultz, who transformed Starbucks from an 11-store Seattle chain he took over in 1986 into a global coffee empire, earlier this month announced that he was returning as interim chief executive. Shultz, who has built up an estimated $4bn fortune, is rejoining for his third stint as chief executive after the retirement of Kevin Johnson.
#Johnson
Add Comment