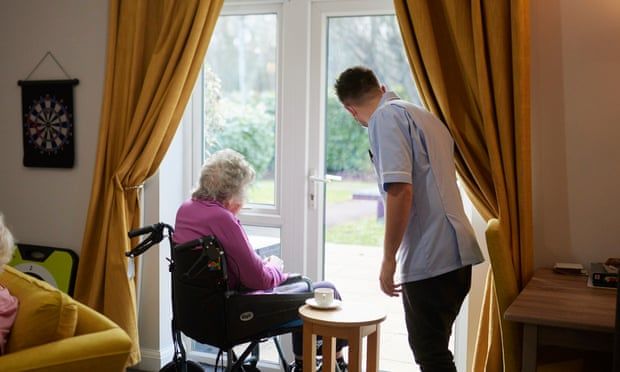 Vulnerable people left alone in rooms for 24 hours a day and denied showers for a week as number of vacancies grows to 165,000

A wave of inspections has revealed the human impact of a worsening nationwide staffing crisis, with people being left in their rooms 24 hours a day, denied showers for over a week, enduring assaults from fellow residents, and left soaking in their own urine.

Stretched staff have described scrambling to help residents with buzzers going off and fear the squeeze on their time is dangerous.

Analysis by the Guardian revealed that staff shortages were identified as a key problem in three-quarters of all the care homes in England where the Care Quality Commission regulator had cut their rating from “good” before Covid-19 to “inadequate” this summer.

A further 10% of homes whose rankings slumped had enough staff, but failed to recruit safely, either not taking references properly, carrying out criminal records checks, or training staff adequately.

Staff shortages rose by 52% in the last year to 165,000 vacancies, according to Skills for Care, and close to one in 10 social care posts in England are now vacant. Examples of comments care workers made to inspectors include “staffing is a disaster” and “because of how intense it’s been and lack of support, staff just don’t want to do it any more”.

The current average pay in independent care homes in England is £9.01. Starbucks baristas earn over £10 an hour, and Amazon warehouse workers earn a basic wage of £10-£12.

Incidents in care homes found to have contributed to breaches of Care Act regulations because of staffing shortages included:

*  A resident at Cedar Lodge care home in Bury St Edmunds – where at times 23 people were left unsupervised – physically and verbally assaulted another. Another person went missing and was only found after a member of the public escorted them to a police station.

*  At Osbourne Court care home in Herefordshire, staff had so little time, they used wet wipes to clean one resident and only showered and washed their hair once a week.

*  Residents were left in soiled incontinence pads overnight at the Hollies in Westcliff-on-Sea.

Workers have been walking out to take less stressful, better-paid jobs in supermarkets, hospitality, hairdressing and factory work, care managers report. Low pay worsened by high inflation and burnout are among the most common reasons given for quitting.

Last week, it was reported that the health secretary, Steve Barclay, would try to recruit overseas workers in care homes amid concerns about staff shortages this winter.

Analysis of dozens of inspection reports shows activities being cancelled, residents being left in their rooms for hours, going without water, and waiting “bursting” for up to 30 minutes to be taken to the toilet. In one home, staff refused a resident’s request to be helped out of her chair because they were too busy.

“We haven’t got time for the residents,” admitted one care worker.

At one home the lack of staff meant a resident wasn’t helped out of bed until 3pm and several others after 12 noon, while at another, the night shift workers started to wake people at 4.45am “to help the day staff”.

In a home with five staff to look after 25 people, a worker told the CQC: “You haven’t got time to finish supporting one person before the other and you have the buzzers going on. You’re rushing them, it’s dangerous, and it’s not fair at all.”

“Older people are paying a heavy price for these failings, as poor care robs them of their dignity, breaks their will and makes them feel unsafe in their own home,” said Helen Wildbore, director of the Relatives and Residents Association. “Older people need much more than empty slogans from the next prime minister about ‘fixing social care’.”

Last year’s announcement of social care reforms focusing on capping costs for service users have been criticised for failing to address the staffing shortage or increasing pay. In July, 88% of NHS leaders polled said a lack of adequate capacity in social care was having a significant or very significant impact on emergency department pressures.

A separate snapshot survey of 45 independent care homes that have lost staff, conducted by the National Care Association (NCA) for the Guardian, found that over half of homes had had to reduce the amount of time staff spend talking to residents and cut back on entertainment and trips out of the home. Despite rising demand because of an ageing population, several managers said more than a quarter of their beds were unused because they lacked the staff to support them.

July’s announcement of a £1,400 pay rise for many NHS nurses has seen more care workers consider switching, said Karolina Gerlich, chief executive of the Care Workers Charity, who is calling for all care workers to be paid at least £9.90 an hour and £11.05 in London.

“The quality of care suffers not because the people that stay aren’t working hard enough, but because there is only so much one person can do,” Gerlich said. “Unless we have parity of pay and conditions [with the NHS], this crisis will continue.”

“We can’t compete with retail, where pay is more appealing, especially as the cost of living begins to bite,” said Nadra Ahmed, executive chairman of the NCA, which represents independent care home operators. “Small and medium-sized providers struggle as many are reliant on local authority funding, which remains woefully inadequate. In hospitals, the beds are based on funding of around £2,000 a week, but in a care setting, the same person warrants around £650 or less.”

Vanessa Meggs, registered manager at the Hollies, strongly denied that staff shortages were preventing adequate care. She said her residents who had learning difficulties and schizophrenia wouldn’t allow incontinence pads to be changed at night.

Four Seasons Health Care, which runs Osbourne Court, said: “Following the pandemic, the sector has struggled to recruit across the country, and we continue to invest in hiring and developing talent in our homes. Since the inspection in March, we have reviewed our staffing management systems and installed an experienced senior manager to oversee the home, working closely with the CQC and the local authority to demonstrate that staff receive training, support and leadership.

“We always maintain safe staffing levels and continue to recruit new team members into the home. The care and support of our residents and colleagues remain our first priority.”