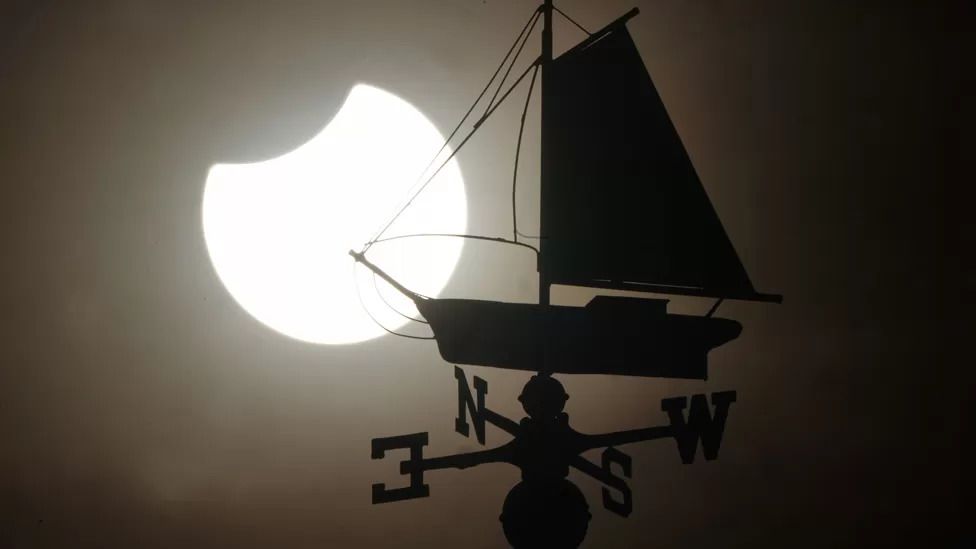 Solar eclipse: Moon blocks part of the Sun over the UK

The UK's only solar eclipse of the year has taken place.

The partial solar eclipse began at 10:08 BST in London, with the maximum eclipse at 10:59. It could be seen across the UK until about midday.

Solar eclipses occur when the Moon passes between the Sun and the Earth, casting a shadow.

One of the best views was in Lerwick in the Shetland Isles, with 28% of the Sun obscured at mid-eclipse.

The Royal Astronomical Society reminded people to never look directly at the Sun, even during an eclipse. 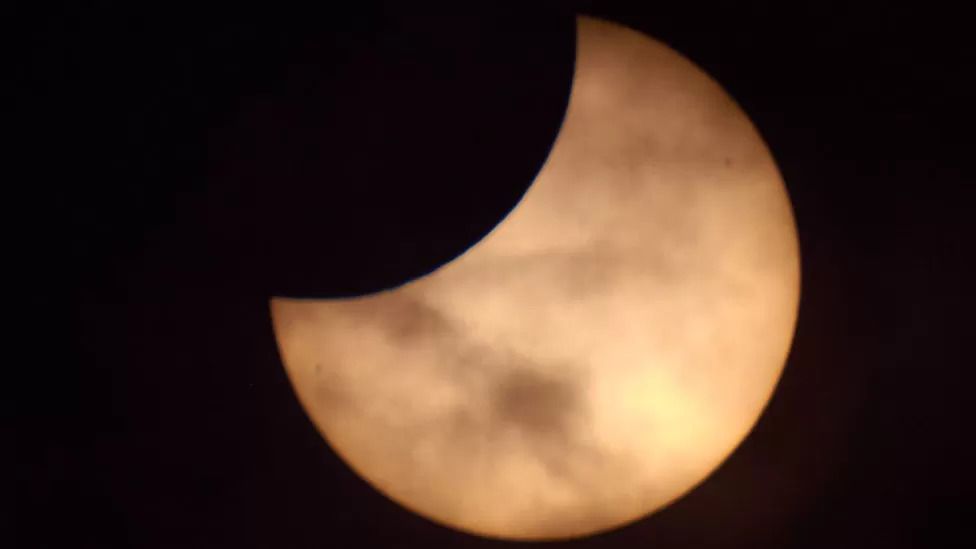 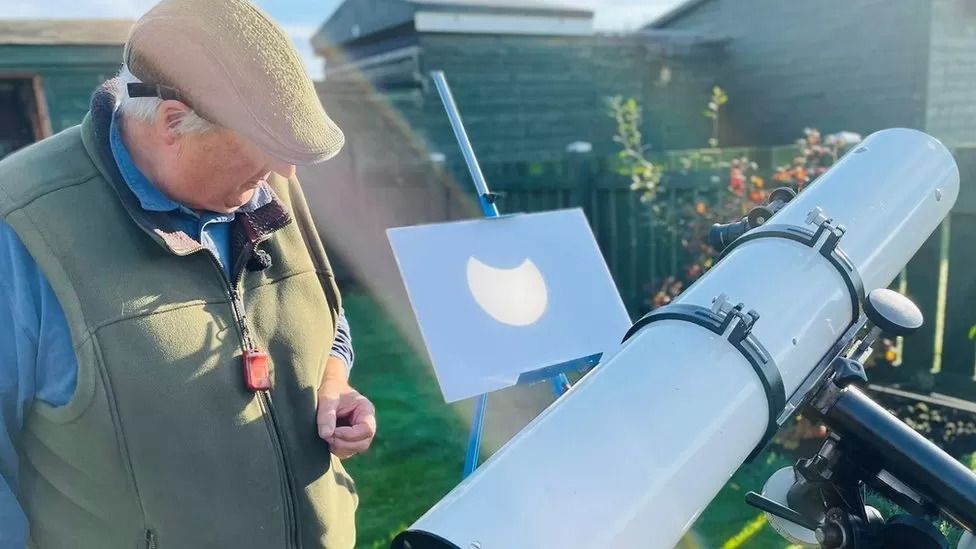 Astronomers recommended capturing the eclipse through a telescope or pinhole, as shown in Aberdeen

Internationally, the partial eclipse was first visible in Iceland at 09:58 BST, before it passed over the northern hemisphere, said the IMCCE observatory in Paris. It was due to come to an end off the coast of India at 14:02 BST (18:32 local time).

Dr Robert Massey, of the Royal Astronomical Society, said observers in western Siberia received the best view of the eclipse, with the Moon obscuring about 82% of the Sun. 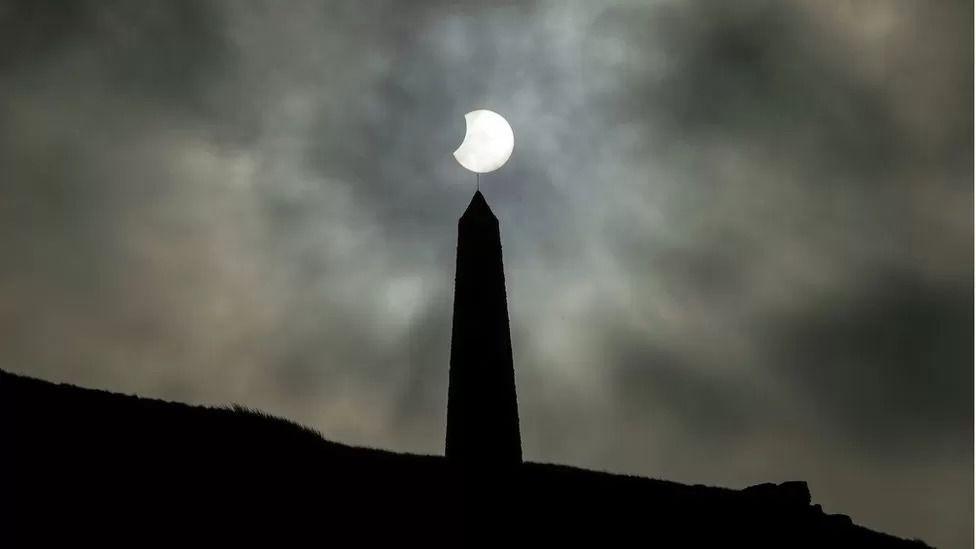 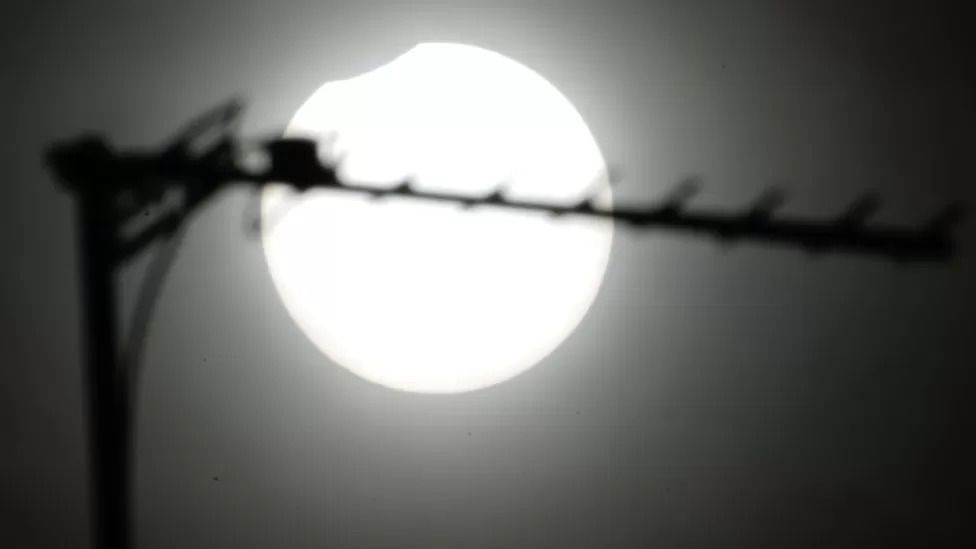 The partial solar eclipse, as spotted over Bristol 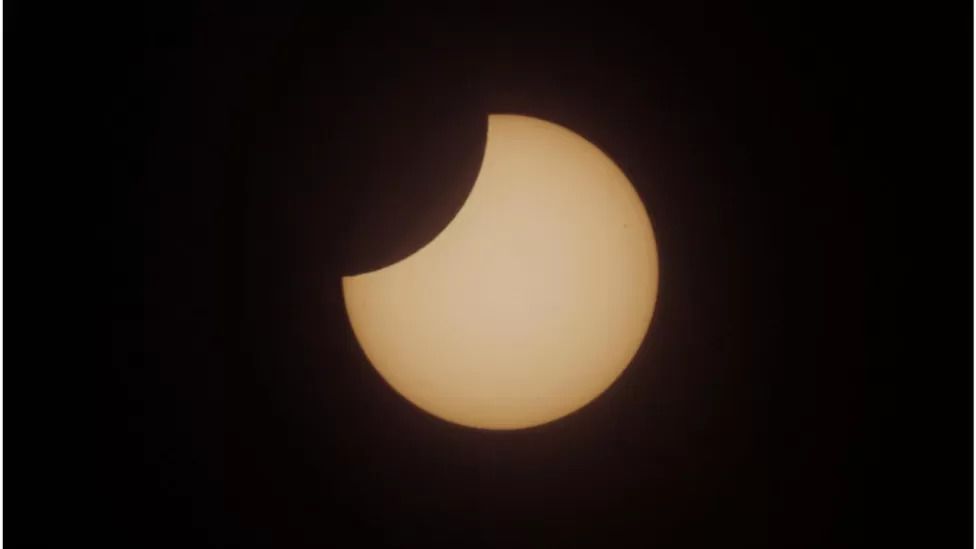 It was also captured by residents in Boxted, Essex

The Royal Observatory Greenwich said even though a portion of the Sun's light was blocked, it did not get noticeably darker in the UK.

"Can't believe the clouds held back," said Laura Ngo, who captured the partial solar eclipse in Witham, Essex, by putting a camera at the back of her telescope. 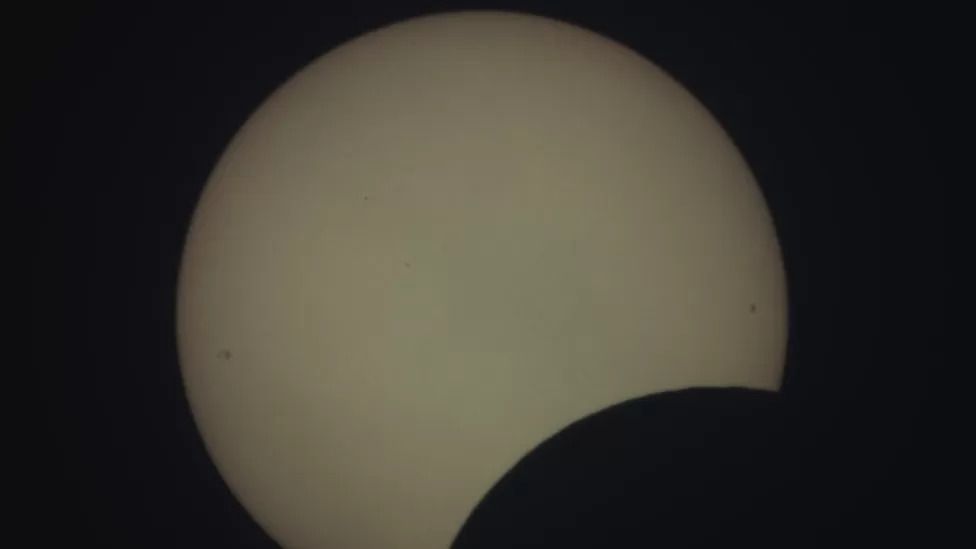 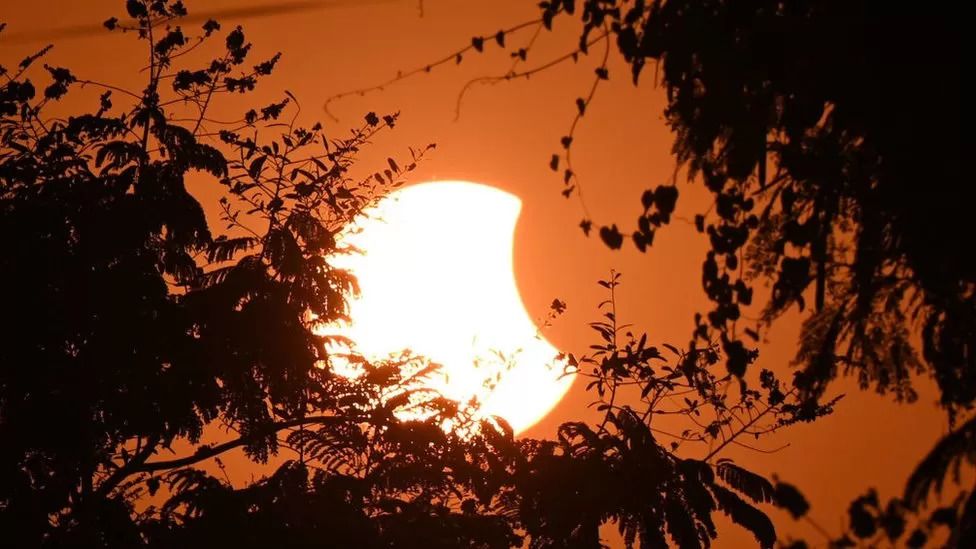 The partial solar eclipse as seen from Hyderabad, India 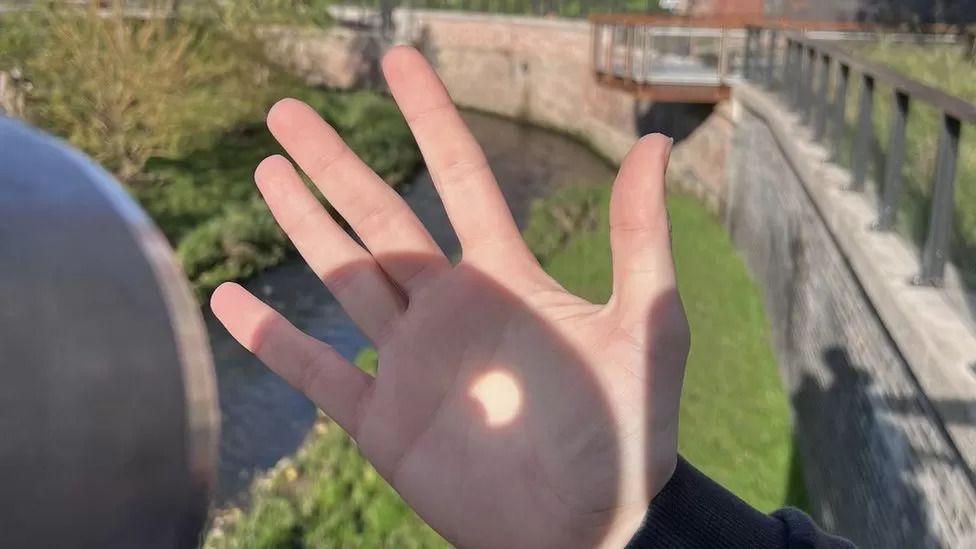 A primary school teacher in Hyde, Greater Manchester, used a telescope to capture the partial eclipse on his hand 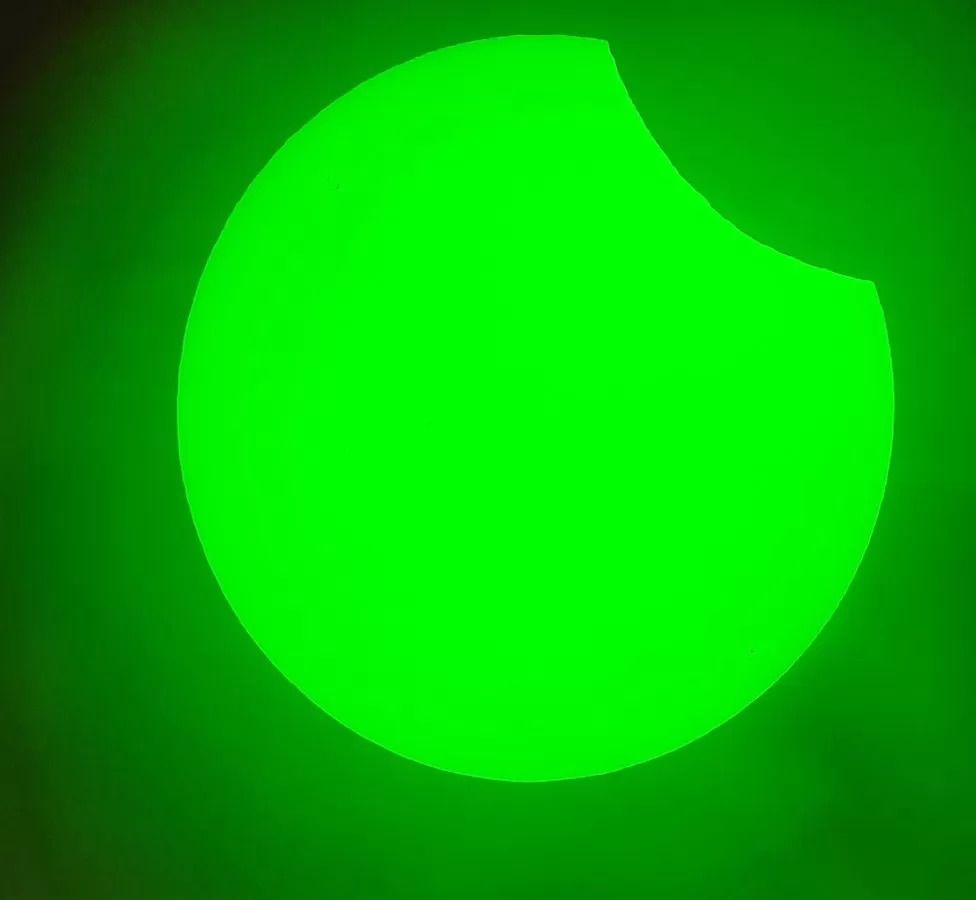 The next partial solar eclipse will be visible from the UK in March 2025, with a total eclipse not forecast over UK mainland until 2090.

But people in the UK will be able see a partial lunar eclipse - when the Earth blocks sunlight from reaching the Moon and creates a shadow across the lunar surface - next October.

A total eclipse of the Sun is expected to pass over North America in April 2024 and in Spain in 2026.

Now you see it, now you don't - the UK's only solar eclipse of the year is spotted in Glasgow