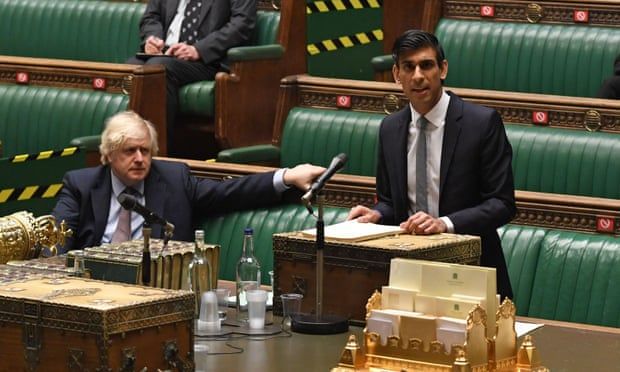 Social care plans to be announced by the end of 2021, Tories insist

Plan under discussion is believed to be some version of proposal to cap total care costs
Ministers have insisted proposals for social care will be announced by the end of the year, as Whitehall sources said they were concerned an aversion to conflict was delaying crucial difficult decisions.

Although hopes have been raised of a settlement before the end of the summer, the chancellor Rishi Sunak has also stressed he believes the Treasury should be aiming to return to a more “business as usual” post-pandemic system where significant spending commitments are not made outside of fiscal events like the budget or the spending review.

A source close to the discussions said: “The chancellor is saying: ‘Can we please do this in the spending review and not keep salami-slicing big spending decisions?’”

The plan under discussion between Sunak, Matt Hancock and Boris Johnson is believed to be some version of the proposal for capping total care costs made after a review into the system by Andrew Dilnot. This could be combined with an increase in the means-test savings threshold at which the state steps in, potentially to £100,000 from the current £23,000.

Hancock is believed initially to have advocated a national insurance increase to meet the costs, but that idea has been rejected, with Johnson keen to stick to his 2019 election pledge of not increasing the main taxes.

The Treasury hopes stronger-than-expected growth will mean the independent Office for Budget Responsibility is about to revise down its deficit forecasts, giving Sunak a bit more fiscal wriggle-room.

But those with knowledge of the debate suggest the chancellor would like to use any headroom to cancel some of the future tax increases he announced at the last budget. Meanwhile, the prime minister would rather spend it on public services to tackle the huge backlogs – in the NHS for example – created by the pandemic.

Treasury officials are writing a series of papers on potential revenue-raising measures, the Guardian understands – including reforms to the taxation of pensions, for example – but neither Sunak nor Johnson wants to have to enact them.

Government sources said they believed the cancellation of Tuesday’s meeting between the prime minister, the chancellor and the health secretary was aimed to take the heat out of the summit, the first the trio have held in two months on the subject. Yet it is understood officials are nervous about the delay to any progress.

“They tend not to row when they’re in person with each other. He [the PM] doesn’t like confrontation. The civil servants have tried to bring it to a head a few times,” the source said.

Nadine Dorries, the mental health minister, blamed a possible diary clash for the delay – though said she did not know the exact reason – and said “absolute commitment by the end of this year is there to introduce social care reform”.

Sources close to Sunak said the chancellor was resigned to reform being an expensive package. “Essentially what this does is transfer what is currently a private provision kind of system to a public provision system. That is going to be costly and that cost is going to probably escalate because we have a population that is ageing,” one Whitehall source said.

The most straightforward solution would be to press ahead with a cap on care costs, though Sunak is known to have doubts about the fairness of the scheme.

“There are question marks over whether a Dilnot-style cap is progressive and whether it leads to poorer pensioners in the north needing to sell their homes but richer pensioners able to afford to keep theirs,” one source said. “These aren’t new dilemmas and at the end of the day it is the prime minister’s call.”
#Boris Johnson
Add Comment