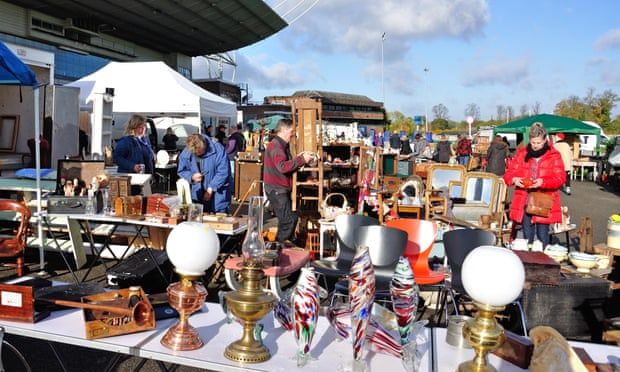 The legion of traders who have indulged Britain’s bargain hunters for decades with their van loads of curios and collectibles from France fear Brexit is about to upend their specialist trade just as open markets and vintage shops are about to reopen.

Importers of everything from farmhouse tables to art deco mirrors and vintage dresses fear they will be stymied by the complicated documentation now required for each item in their van.

“It’s such a strange thing to have this level of restrictions and difficulty with paperwork and import and export when really what you’re talking about is recycling stuff that has been covered in dust and sitting in a loft and would otherwise have been destined for the bin,” said Rebecca Merrill, who runs Sunless Antiques in St Leonards-on-Sea with her partner Adam Freeman.

“Previously, we travelled around France in a van, buying stock from antique fairs, suppliers we know, flea markets and other sources. We would turn up at the border and travel back to the UK without any friction at all and no added costs,” Freeman said.

“The antiques industry could be decimated by all of this. Antiques fairs in the UK are usually packed with European goods, and with European dealers selling, which looks impossible now. London and the UK as a centre for the trade could be wiped out.”

He added: “Many fellow traders, selling for decades, spanning large scale antiques dealers to specialist art dealers and smaller traders selling general brocante goods at UK flea markets are all yet to find a solution.”

Central to the challenge is the fact that customs declarations are required for each item, but also commodity numbers and the age of the antique or vintage clothing for VAT purposes.

Ed Cruttenden, who runs the Sunbury antiques hyperfair on Kempton Park racecourse in Surrey, raised another concern: continental dealers, who account for 10-20% of the UK market, “and are part of the atmosphere”, would also be snagged by post-Brexit changes.

“There’s a woman who comes over who does glassware and ceramics. For her to have to itemise every piece that she’s bringing is going to be a logistical minefield,” Cruttenden said. 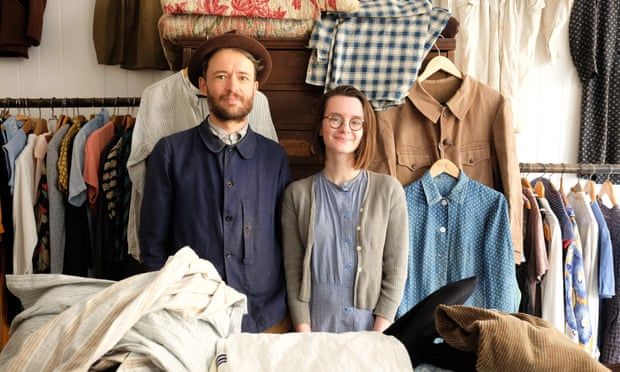 Adam Freeman and Rebecca Merrill in their Sunless Antiques store in St Leonards-on-Sea.

Freeman said part of the problem stemmed from the fact that sellers in France were not official exporters and would not necessarily know the age or the commodity code of a dusty old armchair or lamp which had turned up in a probate sale. Another challenge is VAT (antiques can be zero or 5% rated).

If it were a bottle of wine there would be a code for type of grape and alcohol content but with antiques it is hit and miss, leaving importing in the hands of officials who could impound or turn away goods without specialist knowledge.

“Say I want to declare a 1950s lamp,” said Francis Fowler, a restorer in West Sussex. “You put that into their search engine to get a number that you then put on the form. It doesn’t come up. If you put in ‘lighting’, you’re going to be subject to 20% VAT. If you put in generic antique lighting it still doesn’t come up.”

Kempton Park antiques market reopens for the first time since the latest lockdown on 13 April and Cruttenden is hoping the government can come with some answers, adding that he would welcome anyone to come and talk to his traders to help them navigate their future.

“It really is a minefield. It’s not black and white as to whether they [dealers] can get their stuff over or not,” he added.

While the open-air markets are the lower end of the antiques sector, it is not insubstantial. The Sunbury antiques fair at Kempton Park has about 700 sellers with another in Newark in Nottinghamshire, the largest in Europe, attracting thousands. 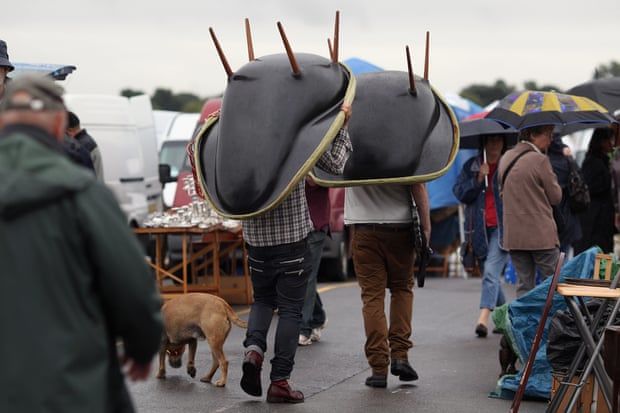 Two chairs are carried away at the Sunbury antiques market at Kempton Park.

Freeman said the government needed to be held to account “for the chaos and disruption and to the damage and cost” on livelihoods and small businesses such as his.

Kathyrn Singer, the director of strategy and operations at the British Antique Dealers’ Association, said she hoped the UK government would find a way of dealing with traders by “some kind of reworking to allow people to transport their own goods for trade purposes”.

Although there was undoubted disruption to the antiques market, she believed it would “return to normal” as “shippers and dealers on both sides of the channel come to grips” with Brexit.

One source said some freight forwarders were among the most entrepreneurial in the export business, and “some might even take a stand at Kempton to help people work stuff out”.

HM Revenue & Customs said: “There is no general relief from import charges for secondhand goods, meaning customs declarations will be required and import taxes will be due unless any specific relief applies.”

While customs declarations have been required since 1 January, the UK had delayed the deadline for full declarations to be filed until next January, it added.

HMRC also advised businesses to study the six methods of calculating customs duties applicable since Brexit, which are on this 41-part government webpage.