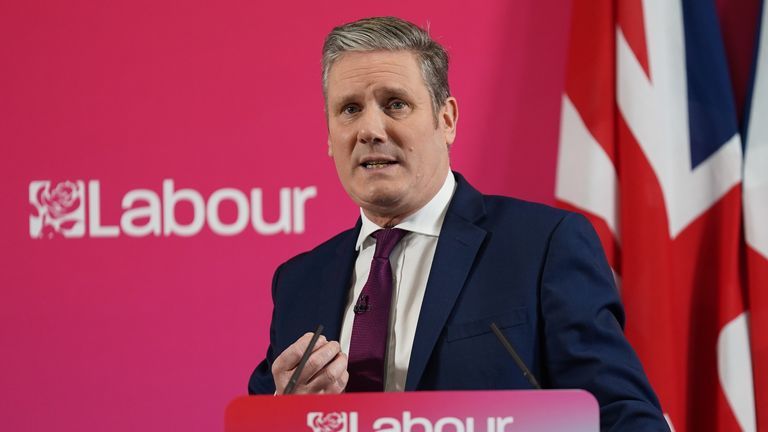 It follows an inquiry into an event at a Labour MP's office in April 2021.

In a statement, the police said there was "no case to answer" citing an exemption to lockdown rules for "reasonably necessary work".

Sir Keir said he would have quit his role if he had been fined as "matter of principle", adding "integrity matters".

"It shouldn't be controversial to say that those who make the law can't break the law," he told a press conference.

He said that in the coming days he would set out how a Labour government would "reboot our economy, re-energise our communities, revitalise our public services, and give Britain the fresh start it needs".

He added that he wouldn't "get everything right" and would make mistakes but promised "What you will always get from me is someone who believes honour and integrity matters."

In a statement, Ms Rayner, who had also promised to quit if fined, said: "The contrast with the behaviour of this disgraced prime minister couldn't be clearer."

At the Durham gathering on 30 April, which was in the run-up to the Hartlepool by-election, people drank beer and ate curry in the constituency office of City of Durham MP Mary Foy.

Social distancing rules - including a ban on indoor mixing between households - were in place at the time.

However, Labour had argued the food was consumed between work events, meaning the gathering was within the rules.

This decision matters because it tells you who will lead the Labour Party into the next general election.

Until today, that was far from certain - a colossal pause button pressed on Sir Keir's future; his political fate in the hands of detectives in County Durham.

He'd decided in May that a fine would equal resignation for him; consistent with his demand that it should have meant the same for Boris Johnson.

He can and will now return to his argument that not all politicians are the same; that integrity matters.

He'll argue that contrast is now more stark than ever in comparison with Mr Johnson.

But while he is mighty relieved today, this is also the week that his biggest political challenge, becoming prime minister, arguably became a bit harder.

For having defined himself in opposition to Boris Johnson, he now faces the moving target of a range of possible opponents.

They'll have - for a while at least - the shine of novelty, albeit without their own mandate.

But they may not present him with quite the same scope for critique as he's had in recent months with the prime minister.

Durham Constabulary launched an investigation into the event in May after receiving "significant new information".

Following the investigation, the police have now said they would not be issuing any fines and no further action will be taken.

"There is no case to answer for a contravention of the regulations, due to the application of an exception, namely reasonably necessary work," the police said.

They have also said they would not name those present at the gathering.

Ms Foy said she was "delighted" by the outcome of the inquiry.

But added that it was "unfortunate that the desire of some Conservative politicians has led to so much of Durham police's time being focused on a matter that was already investigated, especially when their resources are already under significant pressure".

Earlier in the year Boris Johnson, his wife Carrie and his then-Chancellor Rishi Sunak were fined for attending a birthday party during lockdown in June 2020.

Responding to the police's decision, Conservative MP Michael Fabricant said: "I don't think Keir Starmer has done himself any favours today - I'm sorry if this is unjust, but it will reinforce the view of many that it was an establishment stitch-up."

He said he had heard from members of the public who felt the Labour leader had "in effect blackmailed Durham police by saying he would quit if he was fined".