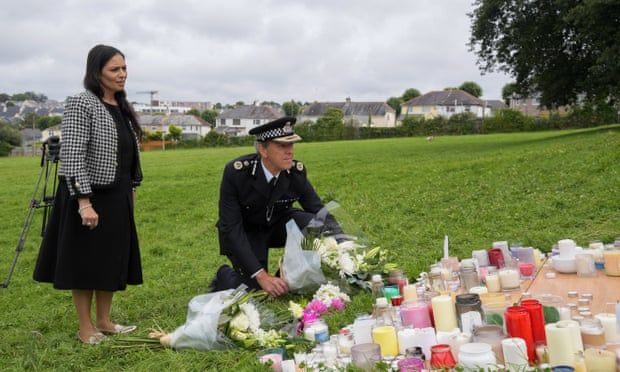 Five-year-old Evie-Rae left her grandmother Terri’s side and carefully placed a pink candle and a teddy bear on the growing pile of tributes at the foot of a tree in North Down Crescent Park.

“I wanted to come because of the little girl,” she said. “It’s so sad what happened. And scary.” She scattered some petals before running off to play.

The Plymouth suburb of Keyham, the scene of Jake Davison’s killing spree, is a tight-knit one. Terri knew Davison’s first victim, his mother, Maxine, well. “She was a lovely lady. We’re all just feeling so numb. It’s hard on everyone – but especially difficult for the little ones to take it all in.”

Throughout Saturday, people turned up to sign books of condolence at churches and a school in Keyham. Across the city, flags flew at half-mast, while some cultural and sporting events were cancelled. 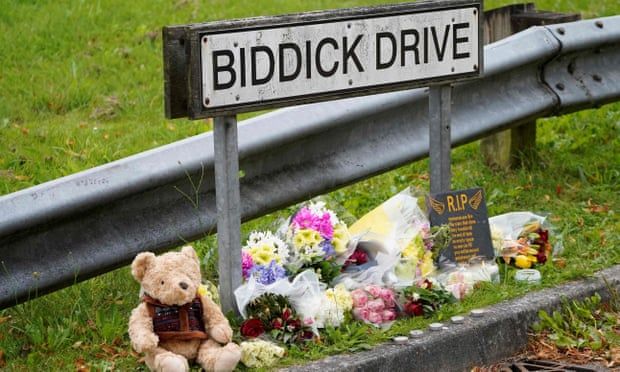 Tributes are left near the scene of the shooting.

The club said on Facebook it was a “mark of respect for a true gentleman and his amazing daughter”, continuing: “Lee and Sophie were very close to us here at The Anchorage and we’ll all truly miss them both. We all know how much Lee loved Everton, so today, as a mark of respect, all staff will also be wearing an item of blue clothing.”

On railings near the Lidl supermarket, where Davison and his mother shopped, someone attached green and white balloons, the colours of the city’s football team Plymouth Argyle, with the five names printed on them.

Several of the floral tributes left outside Lidl referred specifically to Sophie’s death. One read: “Our hearts are absolutely broken for the tragic loss of life in our friendly little part of Plymouth. We are just so sad for everyone and especially for the dear little girl and her family.” Another read: “Sleep tight you beautiful family. Lee and Sophie, you should never have been taken so soon.”

Shortly after Evie-Rae left North Down Crescent Park, the home secretary, Priti Patel, arrived with the Devon and Cornwall chief constable, Shaun Sawyer, to lay bouquets. Patel refused to answer questions about gun control – and why Davison’s firearms licence had been returned to him last month.

The home secretary met members of a local Neighbourhood Watch group in the park. They spelled out that one of their main fears was the impact on mental health the attack would have, particularly on children.

Neighbourhood Watch co-ordinator, Kev Sprowston, told Patel: “This is our September 11.” He explained: “Every single kid, every single adult knows exactly where they were, similar to 9/11.” Many people, including children, had witnessed the shooting spree. “We need help and support to recover from this,” he said. 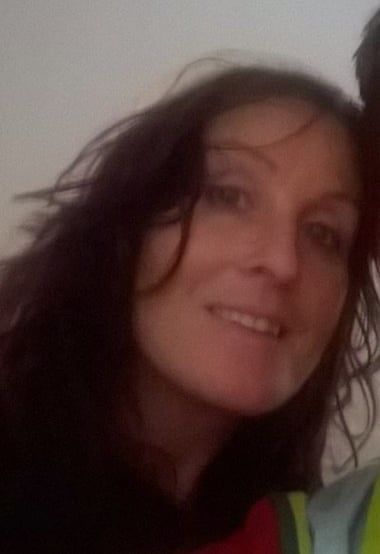 The gunman’s mother, Maxine Davison, 51, was among his five victims.

Laura Mervyn, a counsellor based in Keyham, said: “It’s going to be a long, long struggle for many people in the community, from three-year-olds up. When the children go back to school, at Christmas, for a long time – it’s something we need to keep thinking about. But nationwide there’s a problem – we don’t have enough support for mental health.”

Later, a mum brought her five-year-old son down to the cordon at Biddick Drive, where Davison lived and where the spree began when he opened fire on his mother. The woman, who asked not to be named, said: “My lad’s found it tough. He’s been having nightmares and asking me if we’re in danger. We tell him he’s safe, but it’s a worry. He’ll remember this all his life.”

Akbar Badshah, a community optometrist, arrived at the Lidl tribute site with his young daughter, Zara. “She asked, ‘Is it going to happen to us?’”

The overwhelming feeling in Keyham still seemed to be shock and sadness, but some were starting to express anger that Davison had a licence and weapon.

Submariner Daryl Eden was to be found chatting with Brett Moor, a former colour sergeant with the 1st Battalion Princess of Wales’s Royal Regiment. Moor, who completed 13 tours, said he had never expected to come so close to gun violence on the streets of Plymouth. “I have no idea why anyone needs a gun around here. The whole thing sounds ridiculous to me. The police and government have big questions to answer.” 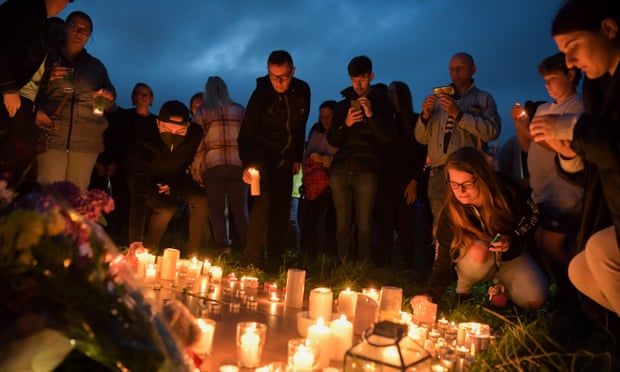 A candlelit vigil at North Down Crescent Park, Plymouth, on Friday.

Labour MP Luke Pollard, whose Plymouth Sutton and Devonport constituency includes Keyham, said he was determined to get answers.

He, too, expressed concern about the impact on the area’s youngsters. “Children witnessed it. How do you deal with a toddler who saw that? We need answers, if they are difficult so be it. We’ve got a whole community grieving here,” he said.

“We’ve got a three-year-old killed. We need proper answers.”