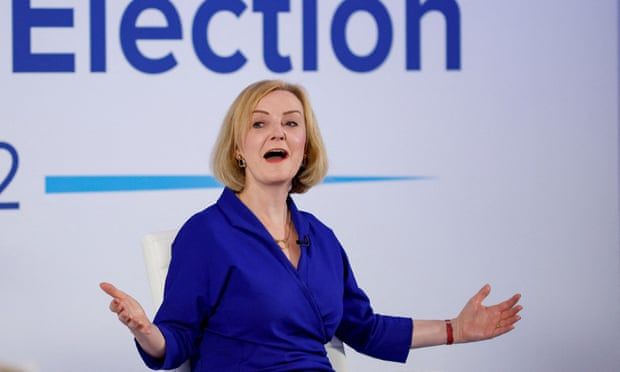 ‘She has no choice’: Liz Truss faces U-turn on energy if she enters No 10, MPs say

For months, everyone in government had known that Friday was energy cap day, and at 7am the bad news duly dropped. Phones pinged as the nation woke to Ofgem’s confirmation that typical gas and electricity bills were to rise by a frightening 80%.

Millions of people would be unable to cope, said charities. Even those on low or middle earnings who had some savings could see them entirely wiped out. It was a full-on national crisis, albeit long predicted.

Consumer champion Martin Lewis tore around central London giving breathless interview after breathless interview, starting on the BBC Radio 4 Today programme at 7.30am. Lewis appeared on 11 separate outlets before 2pm, raging at government failure to act on his warnings, first issued back in March.

But while Lewis was everywhere, and Labour’s shadow ministers piled in unopposed, the government was nowhere. Where, news producers asked, was the energy minister Greg Hands? Or indeed any other minister of the crown? Prime minister Boris Johnson, back from his second summer holiday, or the chancellor for another week at least, Nadhim Zahawi?

Hours earlier Hands, whose responsibilities include energy retail markets, had tweeted that it was “great to visit Los Alamos National Laboratory, here in New Mexico,” where he had been holding “useful discussions” on nuclear fusion.

When asked, mid-morning, if Hands was back at his desk, officials at the Department for Business, Energy and Industrial Strategy seemed at first not to know. Then they said he was travelling to Indonesia for a G20 meeting. This despite the fact that he had been spotted late morning in his department office between flights, clearly with no time at all to entertain any media bids.

With the government absent, the Joseph Rowntree Foundation (JRF) released its own analysis showing that energy bills would outstrip many people’s incomes to the point where paying them would become “fantasy”. It was, the JRF made clear, terrifying.

“In all my years, I haven’t double-checked a piece of analysis as much as this one because it is so staggering, it feels incorrect,” said Peter Matejic, the foundation’s chief analyst. 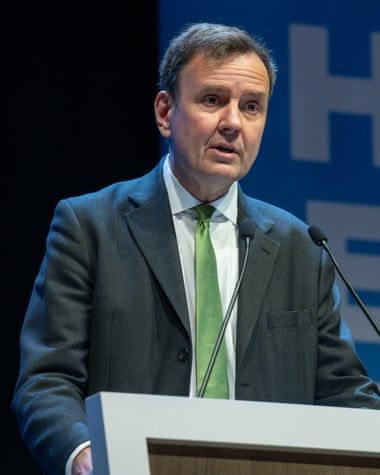 Greg Hands, the energy minister, has been one of those absent from the public eye since the price cap announcement.

“It is impossible to think a care worker or a shop assistant will have to scramble to find hundreds more pounds to pay for their heating or that the entirety of someone’s income for a whole year will be less than their energy bill. But that’s what these figures suggest will be the case unless significant further steps are taken quickly.”

The growing sense of national anxiety that Matejic shared with millions will not, however, be addressed or eased for some time yet by anyone running the country. There are still eight days to go before the name of the next prime minister is announced. Then, once Liz Truss or Rishi Sunak is in No 10, the date for an emergency budget has to be set, options discussed, and eventually, choices made.

Friday morning’s events added to a growing sense that the six-week Tory leadership contest has not only left a vacuum at the heart of power, but that it has taken place in a world some distance from reality.

Not only has the search for a new Conservative leader and PM left government effectively suspended (at the start the cabinet agreed not to make any big financial decisions until it was over, despite the cost of living crisis) but the desire of the candidates to play to what they believe are the views of the tiny Tory “selectorate”, has made pragmatic policy formation impossible.

Truss, the hot favourite, has spent weeks locking herself into potentially inflationary commitments to tax cuts, at the same time pledging to avoid “handouts” which everyone now knows are inevitable if those most in need are to get the help they need with their energy bills.

Both candidates have also leaned away from green solutions to the energy crisis. At several hustings Truss has won applause from Tory members by dismissing solar power.

But reality is closing in. Economists and MPs see danger and say something will have to give. Paul Johnson, director of the Institute for Fiscal Studies, said Truss would have to swerve away from some of what of what she had being saying.

He said: “She is bound to have to do substantial handouts and she is committed to substantial tax cuts. That is clearly going to be many tens of billions of additional borrowing, which will pose risks for the long-term stability of the public finances and potentially for the short-term outlook for inflation or interest rates.”

All governments are struggling to find solutions. But there is a sense of urgent engagement in the EU that has been lacking in the UK. European governments are scrambling to find ways to protect households and businesses and the Czech Republic, which holds the EU’s rotating presidency, is weighing calling an emergency energy summit to discuss bloc-wide price caps.

Many countries have already taken action. Spain has capped gas prices for a year, halved VAT on energy bills and slashed another tax on electricity to 0.5%, and is taxing energy companies more, transferring the money to needy customers.

Italy this month approved a new energy aid package worth €17bn, on top of €35bn earmarked since January for cost of living subsidies, and also aims to tax companies profiting from higher energy prices. Low-income earners are getting a €200 extra payout.

France has forced the state-owned electricity utility EDF to limit wholesale price rises to 4% for a year and cut its tax on electricity consumption from €22.50 per megawatt hour to €1 for households and €0.50 for businesses. Further individual help is being decided.

Germany enacted several energy-saving measures last week: temperatures in public buildings will be limited to 19C from September and heating turned off in common areas such as corridors. The private sector is being encouraged to follow suit.

In the last two days Truss has indicated she will provide help as and when it is needed, but it will require a U-turn before she even becomes PM. David Gauke, the former Tory Treasury minister, said he believed she would have to announce some tax cuts to save face, but that these would provide nowhere near enough help.

In effect he thinks that after six weeks of saying one thing she will have to do another, raising more questions about Tory leadership contests at times of crisis.

“She is trying at the moment to present what she is going to do as very Conservative, whereas I suspect what she will end up doing is something that has a very substantial interventionist, handout measure at its heart, which is not the kind of politics she wants to do but I cannot see she has any choice.”