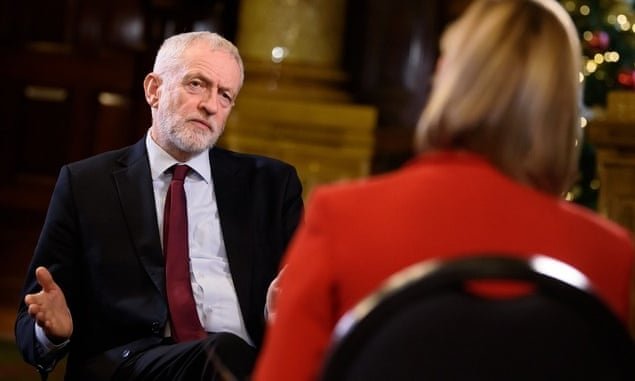 Scrub antisemitism out of Labour? Corbyn won't even clean his own house | Marina Hyde

Perhaps the leader’s wife Laura Alvarez should take over the housekeeping in the party, too
Just two hours before Jeremy Corbyn’s ITV interview with Julie Etchingham aired, it emerged Boris Johnson wouldn’t be doing his version of it after all. But of course. After this election, will any politician risk doing the right thing as far as scrutiny is concerned? Another short-term win for Johnson, where we all end up the losers in the end.

“Just who is Jeremy Corbyn?” wondered the ITV programme’s opening question. “He’s just the sort of guy who likes to hang out on his allotment,” said the first commentator, “watch a film and talk about football.” Is he? When GQ asked him for his favourite film two years ago, Corbyn sighed. “I’m not a great cinema attender.” Last film he saw? “I haven’t been to the cinema in ages.” Fair to say he wasn’t a film fan? wondered the mag. “I mean, I don’t mind the cinema …”

Was Corbyn really Britain’s friend? wondered Etchingham. The Skripal poisonings, blaming terrorism on our foreign policy – whose side was he on? “I’m on the side of people,” clarified Corbyn with beneficent vagueness. “I’m on the side of our society.”

Etchingham mostly wanted to take a personal look at Corbyn, particularly domestic Corbyn. And fortunately, ladies, we no longer think that the personal is political, because Jeremy Corbyn doesn’t do a lot round the house. Or as Laura Alvarez, his third and current wife has put it, he is “not very good at housework”.

“I am good at putting the garbage out,” Corbyn countered. He also claimed wryly to be “head manager of the whole composting arrangements”, which is certainly better than twinkling: “Look, the household is her domain, my life wouldn’t be worth living if I got involved in all that”, but arguably means something similar in practical terms.

Then again, tribalism dictates that Corbyn’s focus on bin duties will be regarded as charming by many of the exact same people who lost their shit at the last election when Theresa May suggested to the One Show that there were “girl jobs and boy jobs”, and that one of the boy jobs was doing the bins. Back then, many people greeted this non-drama with mild observations such as “I truly despair” and “sexism at its finest”. Guys, you don’t have to do anything other than detest her. But if the girl in question has made it to prime minister, it’s probably OK to say this stuff within her own marriage?

As for Corbyn, perhaps he is like many gentleman dishwasher stackers or countertop wipers we have known. (But of course, not all.) Which is to say, he brings the same level of deliberate incompetence to doing the household dusting as he does to investigating Labour antisemitism – perhaps hoping that if he does both those jobs sufficiently poorly he won’t be asked to do them ever again.

Alas, whilst a welter of women’s lived experience suggests this approach is truly effective as a housework evader, it has had mixed success as far as cleaning house in the Labour party is concerned. Maybe the best way of getting that job done properly is for Alvarez to take over the whole antisemitism caseload with the words: “Oh for God’s SAKE, just LEAVE it, then – it’s quicker to do it myself”? Something for the Labour party to bear in mind when the Equality and Human Rights Commission concludes its investigation, particularly after the Jewish Labour Movement’s eyewatering submission to that body leaked on Thursday.

Now, before I move on to the Queen’s Christmas speech section, this is the bit where we have to say that the Tories are worse, even if we’ve said it in multiple other articles, multiple times, including this week.

So here we go: Boris Johnson is probably even more useless round the house than Corbyn. Yes! Could Johnson rise to the level of Head Manager of the Whole Composting Arrangements? I sincerely doubt it. Keen to counteract the powerful impression that he does the bare minimum, one of Johnson’s early campaign videos saw him claim to have recently cooked “steak and oven chips”. I can imagine. Johnson’s got the definite look of one of those guys who mastermind a barbecue by letting the women have the endless faff of doing the shopping and the salads and the marinades and the sauces and so on, then stand by the grill with a beer and a pair of tongs, occasionally turning over the chicken drumsticks, taking the credit for “doing” the whole barbecue. (But of course: not all barbecuers.)

And so to Corbyn’s Queen’s speech fibbing. As someone who wouldn’t dream of doing anything so naff as watching it either, I support Corbyn having better things to do – though perhaps I am not the target demographic for interviews such as this. There is some suggestion that voters will find Corbyn’s viewing habits weird, as though sitting down en famille to watch the Queen not mention Paedophile Island is the behaviour of a normal nation living its best life.

Whichever way you shake it, though, it is best not to try to bullshit that you DO watch the Queen’s speech, as the Labour leader did during this interview, saying he has it on “in the morning”. Even worse is sending out Angela Rayner to do clean-up, with the shadow education secretary saying that maybe he watched it in the morning “on catch-up”. Is this in his Tardis?

As for Corbyn’s refusal to take up the prime ministerial country residence of Chequers on principle should he win next week, this is the diametric opposite to Donald Trump’s refusal to use Camp David and preferring to use his Floridian golf hotel, Mar-a-Lago. As this and all his other interviews ever would attest, Corbyn is not he sort of guy to own a Floridian golf hotel. I hear there is a small structure on his allotment, but certainly nothing with a repro Louis Quatorze ballroom. Apart from anything else, who’d clean it?
Add Comment