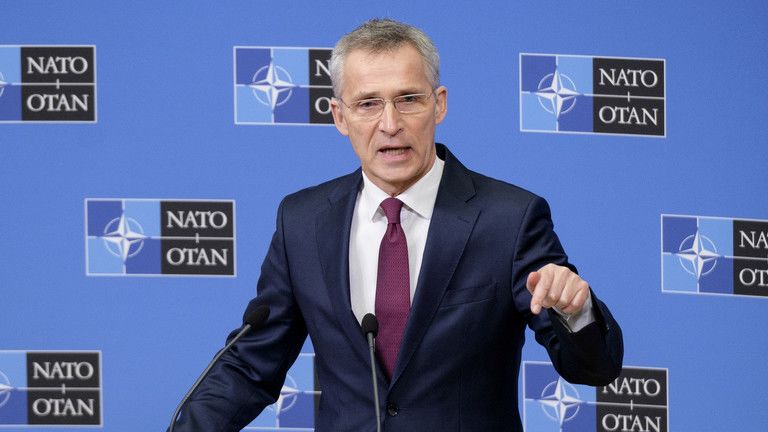 Scott Ritter: NATO’s arsonist-in-chief Jens Stoltenberg wants the Western public to pay for a Ukrainian fire he helped to ignite

Scott Ritter
EU members should ‘stop complaining’ and ‘pay the price’ for the Russia-Ukraine conflict, says leader of the bloc which started it all
The General Secretary of NATO, Jens Stoltenberg, took it upon himself recently to lecture the members of the European Parliament about the need to “pay the price” necessary to keep Ukraine able to function and fight in its ongoing conflict with Russia. What he failed to admit was the major role he himself played in bringing about this conflict.

The Norwegian has an important role. In many ways, one can liken it to that of a fire commissioner whose job is to bring together various neighborhood fire departments into a large mutual aid pact, where a fire in one district automatically causes the resources of the neighboring districts to be dispatched in response. That’s Article 5 of NATO’s Charter in a nutshell.

Like any membership-based bureaucracy, joining a fire district, like joining NATO, involves a process which requires specific undertakings by all parties involved. The mutual aid pact, like Article 5, can’t be triggered unless the involved party is a member.

And now imagine that it turns out that the fire commissioner is an arsonist who helped set the fire in the first place.

That’s pretty much the scenario which faces NATO today, where the US-led bloc is struggling to deal with the consequences of 14 years of fundamentally flawed policy which saw it promise Ukraine eventual membership, despite knowing that Russia was adamantly opposed to such a move. NATO then watched as its constituent members helped conduct a coup in Ukraine in February 2014, replacing a duly elected president with a cohort of politicians hand-picked by Washington.

The coup in question was made possible only with the involvement of radical Ukrainian right-wing nationalists whose lineage can be traced back to Nazi Germany and, post-World War Two, covert CIA backing which lasted from 1945 through the present. The involvement of these neo-Nazi elements can be likened to the fire commissioner dispatching a team of fellow arsonists to ostensibly help prepare the prospective member for joining the fire district, only to have them secretly conspire amongst themselves to instead burn down entire neighborhoods within the territory of the candidate district.

For eight years Jens Stoltenberg oversaw a system which pretended to pursue peace in Ukraine post-coup through the Minsk Accords, only to secretly conspire with Ukraine, France, and Germany to prevent closure on the accords for the purpose of buying time for Ukraine to build a NATO-standard military capable of delivering a massive knockout blow to the breakaway Donbass region, and perhaps even Crimea.

Stoltenberg helped light the match that set Ukraine ablaze. And now it turns out, during a meeting with members of the European Parliament, the secretary general of NATO chastised the parliamentarians to “stop complaining and step up and provide support to Ukraine”.

The arsonist-in-chief was lecturing the insurance underwriters of Europe to suck it up and pay the price of his handiwork.

His hypocrisy was sickening. “The price we pay as the European Union, as NATO,” he declared, “is the price we can measure in currency, in money. The price they [Ukrainians] pay is measured in lives lost every day. We should stop complaining and step up and provide support, full stop.”

Left unsaid was the fact that Stoltenberg and NATO were responsible for the conflagration which has swept over Ukraine. With Kiev gearing up for an offensive against the Donbass, only Russia’s decision to launch its own special military operation prevented the NATO/Ukrainian plan from reaching fruition.

But the arsonist cannot admit that he started the fire. Instead, Stoltenberg not only shifted responsibility for the Ukraine conflict onto Russia, but then had the audacity to state that the fire he started posed a threat to all of NATO. “It is in our interest to help Ukraine,” Stoltenberg declared to the European parliamentarians, “because you have to understand that if Ukraine loses this, that’s a danger for us.”

Ignoring the fact that he was largely responsible for the disaster that struck Ukraine when Russia initiated its military operation, Stoltenberg planted his banner firmly onto a hill of hypocrisy, proclaiming: “If you don’t care about the moral aspect of this, supporting the people of Ukraine, you should care about your own security interests. Pay for the support, pay for the humanitarian aid, pay the consequences of the economic sanctions, because the alternative is to pay a much higher price later on.”

But admitting a mistake is not part of the moral fiber of an arsonist.

Scott Ritter is a former US Marine Corps intelligence officer and author of 'Disarmament in the Time of Perestroika: Arms Control and the End of the Soviet Union.' He served in the Soviet Union as an inspector implementing the INF Treaty, served in General Schwarzkopf's staff during the Gulf War, and from 1991 to 1998 served as a chief weapons inspector with the UN in Iraq. Mr Ritter currently writes on issues pertaining to international security, military affairs, Russia, and the Middle East, as well as arms control and nonproliferation. Follow him on Twitter @RealScottRitter and on Telegram @ScottRitter
Add Comment