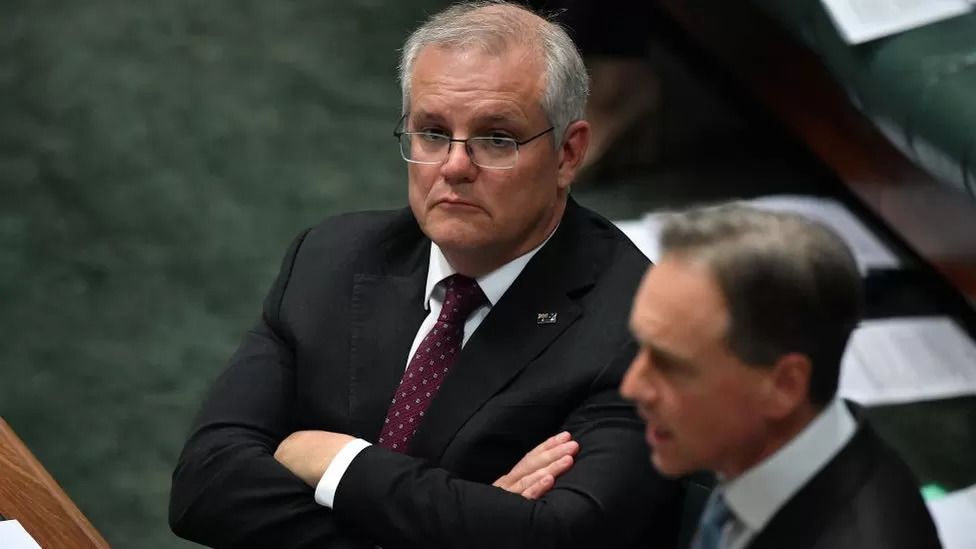 Mr Morrison became joint minister for the health, finance and resources portfolios in the two years before he lost power in May, local media report.

Mr Albanese said he would seek legal advice about the decisions, calling them "unacceptable" and "just weird".

On Monday, Governor-General David Hurley - the Queen's representative in Australia - confirmed he had signed an "administrative instrument" that had allowed Mr Morrison to secretly take on the portfolios. It was "consistent with section 64 of the constitution", a spokesperson said.

But Mr Albanese, law experts and Mr Morrison's former colleagues have criticised the secrecy surrounding it.

Even some ministers were reportedly not aware they were sharing portfolios with the former prime minister.

"This is the sort of 'tin pot' activity that we would ridicule if it was in a non-democratic country," Mr Albanese told reporters on Monday.

Local media reported that former Health Minister Greg Hunt agreed in 2020 to share his portfolio in the event he became incapacitated from Covid.

But then-Finance Minister Mathias Cormann - now head of the OECD - only learned last week that his role had been jointly held, said a report by local outlet News.com.au.

Mr Albanese said he would not speculate on forthcoming legal advice but accused his predecessor of having governed "in the shadows".

When asked to respond to Mr Albanese's comments, Mr Morrison said he wasn't aware of them. "Since leaving the job I haven't engaged in any day-to-day politics," he told Sky News Australia.

Mr Morrison's deputy from June 2021, Barnaby Joyce, said he did not have prior knowledge of the appointments.

"I found out about it, and I disagree with it. I believe in a cabinet system of government where ministers are responsible for their own portfolio. We don't have a presidential form of government," Mr Joyce told Channel 7.

The centre-right coalition suffered a convincing defeat in May's general election. It lost many seats in cities - where climate action and political integrity were seen as key issues.

That's what Mr Albanese (and a number of constitutional experts) have said about the reports.

There are so many questions and you'd be forgiven for being confused. No-one is sure who knew what, when.

It would be normal for a leader to make sure that someone can step up and do the job if a minister is incapacitated, especially at the height of the pandemic.

But there are many ways of doing this. Why did it have to be him? And more crucially, why the secrecy?

As it stands, nothing about this gels. But here's why this could potentially be a big deal.

For a leader of any country, let alone a democracy, to take over several portfolios without the public's knowledge or the knowledge of his own colleagues, raises serious questions.

If confirmed, this also means that the then-prime minister was potentially aiming to centralise power so that the decision-making would ultimately come down to him.

Remember, this was happening at a time when Australia was in and out of lockdowns and when the Morrison government faced a lot of criticism for the way they handled the vaccination programme.