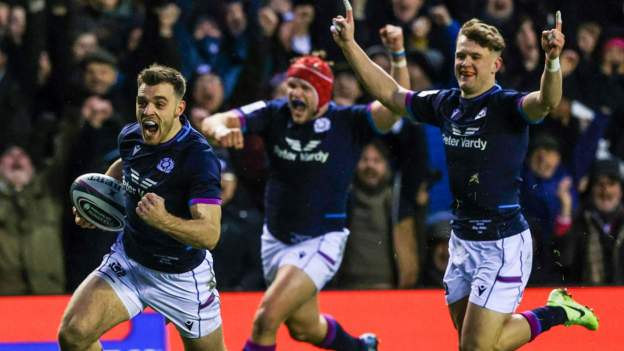 The visitors dominated possession and territory in the sides' tournament opener at Murrayfield, and led going into the final quarter thanks to a 17-point haul by Marcus Smith.

But Scotland - who were in front at the break after Ben White's debut score - were awarded seven points after Luke Cowan-Dickie deliberately slapped a Finn Russell cross-kick into touch, and edged to victory with a late Russell penalty.

It was a statement win for Gregor Townsend's side, who have won three of the past five meetings and journey to Wales next Saturday with their Six Nations Championship aspirations burnished.

Eddie Jones' England, meanwhile, have now lost four of their last six matches in the competition and travel to Italy the following day needing a win to salvage any hopes of being contenders.

Mercifully the biblical weather forecast never quite lived up to the doomsday predictions. Murrayfield was packed and heaving and, then, hushed.

If the home crowd was expecting thunder and lightning from their boys from the start, what they saw instead was waves of England possession and territory.

Jones' team didn't do a whole lot with it, but they piled it on none the less. Scotland could hardly get anywhere near the ball as this young England - stripped of so much experience through injury - set the tempo.

Stuart Hogg had to scramble to get Max Malins into touch, then Smith banged over a penalty when Jonny Gray played Ben Youngs illegally.

Scotland lost Ali Price to a HIA soon after. What a moment that was for his replacement White on his debut.

The new scrum-half appeared, lit up Murrayfield with the opening try, and then departed again when Price got the all-clear. In the short history of HIAs there can't have been many greater cameos than White's.

It began with a quick Scottish line-out from George Turner, then a Sam Johnson surge. At last, some Scottish urgency.

Hogg took it on, drew Maro Itoje and found Graham. The wing was terrific, bamboozling Joe Marchant before finding White on his shoulder. Wonderful. Russell made it 7-3 to Scotland, a lead they scarcely warranted.

England carried on dominating possession and territory, carried on trying to pin the Scots back without showing the penetration needed to breach what has been the best Six Nations defence over the past two championships. They prodded away.

Smith floated a cross kick to Henry Slade but it flew just above the centre's head. England launched a maul and drove it over the Scottish line but Slade got held up.

They got some kind of reward for their dominance of the ball when Smith landed another penalty to put them within one.

Russell cancelled that one out just before the break. A four-point advantage at half-time? The Scots were blessed. They'd had one attack, one decent bout of possession. England had 76% of the ball - and a deficit.

All of that flipped early in the new half. England began strongly again, but this time they put points on the board, Smith firing over a penalty to make it 10-9 and then adding that try four minutes later.

Again it was an England maul that had Scotland in trouble. Left woefully short of defenders down the blind-side, Youngs and Smith executed with ease. Smith failed with the conversion but made amends with another penalty just after the hour.

England by seven. The Murrayfield crowd quieter than church mice. The sight of Jamie Ritchie leaving with a serious-looking injury did nothing for their mood.

But that mood altered dramatically. Cometh the hour, cometh the man, Russell cross-kicked right to left for Duhan van der Merwe to stretch England one way, then cross-kicked left to right to stretch them the other. The pivotal moment of the day had arrived.

Graham and Cowan-Dickie competed for it practically on the try-line, the hooker done for batting it into touch deliberately. The tension was off the scale. Penalty try Scotland, yellow card Cowan-Dickie, a game levelled, a crowd in delirium.

Scotland went again, Russell put them in front with a penalty and, incredibly, they'd hit the front.

It looked like they'd put it to bed when they got another penalty in front of the posts, but it was reversed. It looked like England were about to launch a major attack in the last seconds but they coughed up a line-out. Prop Joe Marler unwisely threw the ball in. Why didn't Jones bring on Jamie George for that potentially crucial set piece.

Even still, England had a scrum and reset upon reset in the final play. The visitors were desperate for a penalty, the Scots desperate to survive. The Scots prevailed. Remarkable.

Back-to-back Calcutta Cup wins for the first time in almost 40 years and huge momentum going to Wales next week. For England, more misery at the hands of a resurgent Scotland.

Scotland head coach Gregor Townsend: "I was so nervous for that set of scrums at the end. It was crossing my mind what England might do if they got a penalty, but fortunately it was decided on an error rather than a penalty.

"[Our self-belief] is excellent, as is our character. We were behind and came back. Some of our best rugby was in the last 15 minutes in tricky conditions.

"Finn Russell was superb all game. It means so much to Scotland as a nation. We know we can improve going forward."

England head coach Eddie Jones: "Scotland were a bit better than us and took their chances. There wasn't much in it, but congratulations to Scotland.

"We don't apportion any blame to Luke [Cowan-Dickie] - the referee adjudged it was a yellow card and we have to get on with it. We had opportunities to kick on, but we just weren't clinical enough.

"Given the quality of the competition, we just have to go to Italy and win."