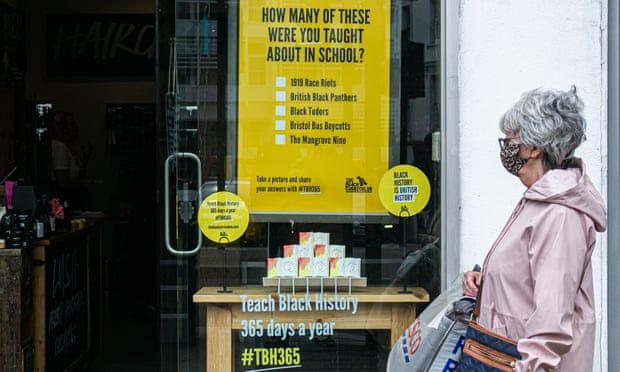 Nick Gibb says no reason why children from ethnic minorities should not study work of a ‘dead white man’
The Schools minister, Nick Gibb, has pushed back against calls to decolonise the curriculum in England and has warned that what pupils learn in the classroom should not be tailored to any one particular group.

Amid mounting pressure to make the teaching of black history mandatory in schools and to diversify the national curriculum, the minister said there was no reason why children from ethnic minorities should not study the work of dead white men.

In a speech to the Social Market Foundation thinktank on Wednesday, Gibb said a “knowledge-rich” curriculum taught well was “inclusive and diverse” and would ensure that pupils learned about the struggles and achievements of people from all races.

He said: “We will not create a more harmonious, tolerant and equal society through promoting a curriculum based on relevance to or representativeness of any one group. Nor will we do so by being ashamed of who we are and where we came from.

“A curriculum based on relevance to pupils is to deny them an introduction to the ‘best that has been thought and said’. And, of course, there is no reason why the work of a ‘dead white man’ is not appropriate for children from ethnic minorities to learn about.”

The Department for Education has resisted calls to make the teaching of black history mandatory, insisting that the curriculum already allows for teaching black history and includes black and ethnic minority voices and experiences. Black history will be be mandatory in Welsh schools from next year to help pupils become “informed citizens of the world”.

Gibb also expressed concern about reports of what he described as “violent and angry protests” in schools around the country, sparked by recent events in Gaza. Escalation in the Middle East conflict triggered a wave of pro-Palestinian protests by pupils, some of whom later complained they were accused of antisemitism and subjected to disciplinary action.

He said young people should be given all the facts to help them understand the situation in Israel and Palestine and warned: “We must be on our guard to ensure that schools don’t become centres of one-sided propaganda, or a hostile environment for young people of any faith or religion.”
Add Comment