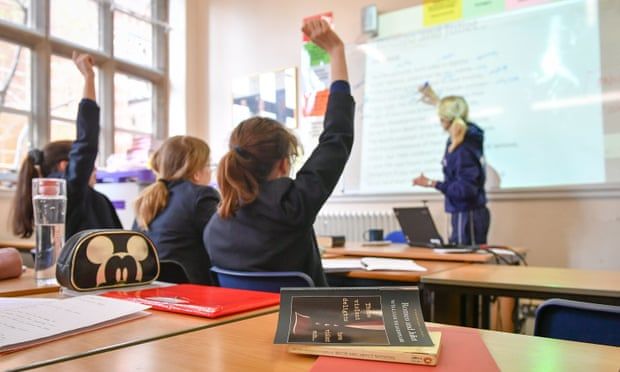 Institute for Fiscal Studies says spend per pupil set to be lower in 2025 than in 2010, with budgets already under strain from rises in food, energy and wage bills
Schools in England are facing a looming funding crisis, with spending per pupil in 2024-25 expected to be 3% lower than in 2010, according to research.

After a decade of austerity cuts, ministers pledged to restore per pupil funding to 2010 levels by the end of the current parliament, but the Institute for Fiscal Studies (IFS) says the government is no longer on track to meet its objective because of the cost pressures on schools.

The IFS research calculates that the increased costs schools are facing are “just about affordable” for the next academic year because of a £4bn rise in the schools budget this year.

It warns, however, that the government’s spending plans going forward are insufficient and real-terms cuts will follow, undermining the role that schools might play in its levelling up ambitions.

School leaders, meanwhile, say they are already struggling to balance their budgets in the face of massive hikes in food, energy and wage bills, with many warning of deficits and more cuts to educational provision.

One finance manager said a secondary school in her trust had seen its electricity bill jump from £75,000 last year to £213,000. They are also worrying about how to meet teacher salary increases with no additional funding from government and spending already cut to the bone.

Julia Harnden, a funding specialist at the Association of School and College Leaders (ASCL), said: “It is a very poor reflection on the government’s priorities that it will have presided over a 15-year decline in school funding by the end of this parliament.

“While it may argue that there are inflationary pressures beyond its control, the fact is that it is the government itself which has proposed a teachers’ pay award for September without providing any additional funding for schools to afford these costs, and it has also consistently ignored our repeated warnings about the impact of soaring energy costs.”

The situation in post-16 education is even worse, Harnden said, citing IFS analysis from last autumn which showed college funding per pupil in 2024-25 10% below 2010-11 levels, while school sixth form funding per pupil will be 23% below.

“It is likely that rising cost pressures will exacerbate this desperate situation,” she said. “The government simply must respond by ensuring that schools and colleges have the funding they require to at least maintain provision, and if the government is serious about raising pupil attainment it must provide the resources that are needed to make that ambition achievable.”

Sarah Ewins, chief finance and operating officer at the Middlesex Learning Trust, said the schools in her trust had struggled to set balanced budgets for September in the face of rapidly mounting cost pressures including energy costs up by 200%, only for all their planning to be thrown up into the air by the announcement of the teacher pay award on the last day of term which added an extra £95,000 to the expected wage bill of each school.

“We fully support paying teachers and support staff properly (especially given years of real terms pay cuts) but we simply cannot do this without additional funding.”

The Department for Education said it recognised that schools are facing increased costs due the unprecedented rise in inflation. “To support schools, budgets will rise by £7bn by 2024-25, compared with 2021-22, with the total core school budget increasing to £56.8bn. In the current financial year alone, core school funding is rising by £4bn compared to the previous financial year.”

The government’s recent schools white paper set a target that 90% of primary pupils should achieve the expected standard in reading, writing and maths by 2030. Ruth Maisey, education programme head at the Nuffield Foundation which funded the research, said: “It is essential that the government addresses the cost pressures highlighted by this IFS analysis, to ensure that schools can deliver on ambitions for student attainment.”

Labour accused the Conservative leadership contenders of “blustering” about the return of grammar schools during campaigning, rather than pledging any real action to secure children’s education.

Shadow schools minister Stephen Morgan said: “The Conservatives are failing our children with staff numbers falling, school buildings in a state of disrepair and fewer trips, clubs and enriching activities.”

Dr Mary Bousted, joint general secretary of the National Education Union, said: “School funding has stagnated for too long, letting down generations of young people. It allows buildings to fall into disrepair, the loss of vital staff and the side-lining or removal of whole subjects. These privations long pre-date Covid and the cost-of-living crisis.”

Paul Whiteman, general secretary of the National Association of Head Teachers, added: “There is no doubt that the reality of the government’s current approach to education funding will lead to cuts to education, services and school staff next year.”

Luke Sibieta, IFS research fellow and author of the report, said: “The big fiscal choice for policymakers this autumn is whether or not to provide more funding to public services to compensate for rising costs and the significant challenges they face. It will be that much harder for schools to meaningfully contribute to levelling up ambitions when they face real-terms cuts from next year onwards”