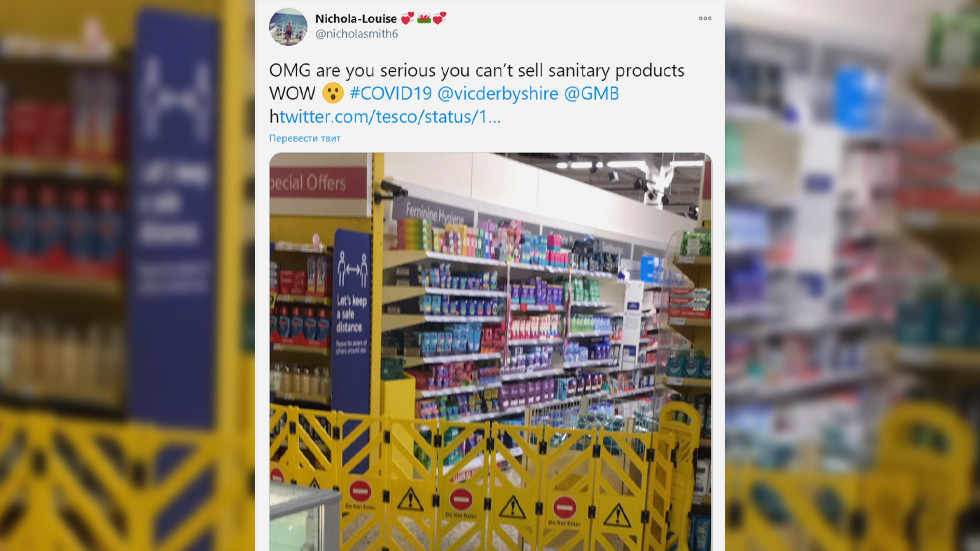 The move has left shoppers confused and asking what is and isn’t essential. One lady’s enraged tweet went viral after she found period products cordoned off in her local Tesco supermarket.

Tesco responded to the shopper, in a tweet that was apparently deleted afterwards, claiming that the measures were in line with the government restrictions.

At this point, the Welsh government intervened, pointing out that these products need to be available. “Supermarkets can still sell items that can be sold in pharmacies,” a tweet from an official account clarified.

This is wrong - period products are essential.

Supermarkets can still sell items that can be sold in pharmacies.

Only selling essential items during firebreak is to discourage spending more time than necessary in shops. It should not stop you accessing items that you need. https://t.co/kIo5l5z2Zc

Social media has been awash with exasperated citizens making their own protest. A Welsh man responded to the announcement that clothes were non-essential by taking to the supermarket only wearing his underwear.

Many people were angered by the availability of alcohol but not other items. One woman claimed that she couldn’t buy a sympathy card for her friend who had lost their father to Covid, but she could buy vodka.

Currently in Wales I can’t buy a sympathy card for a friends Dad who has just died from Covid but I can buy a litre of Vodka how wonderful!! Well done @fmwales absolutely fantastic! #walesinlockdown pic.twitter.com/s0aYjna2Z5

Whilst another lady questioned the government’s commitment to mental health.

No books, no video games, no board games, to amuse yourselves whilst on lockdown. Instead, buy yourselves a nice bottle of Bell’s whiskey only £20 a bottle! Seriously? This mapped out by a government supposedly worried about the nation’s mental health? 🤦🏼‍♀️ #tesco #walesinlockdown pic.twitter.com/QZtlkKs2Dn

One woman told the BBC that she was unable to buy replacement clothes for her daughter after she was taken to hospital covered in blood. “I have never felt so angry, frustrated or upset, ever. You just never know when a ‘non-essential’ item will become ‘essential’ to you.”

The shopping rules were introduced on Friday evening, as part of Wales’ 17-day lockdown, but retailers argue that they weren’t given enough time to prepare as the restrictions were only announced on Thursday morning.

Businesses also claim that they haven’t been given a definitive list of banned items, leading to confusion as shops try to interpret the new rules.

Over 65,000 people have signed a petition demanding the removal of the ban on non-essential items being sold in supermarkets.

On Saturday, Welsh First Minister Mark Drakeford said the government would “be reviewing how the weekend has gone with the supermarkets and making sure common sense is applied.”

Wales is subjected to the strictest Covid-19 measures in the UK, with guidance suggesting people should only leave the house if they really need to. The lockdown will remain in place until November 9.