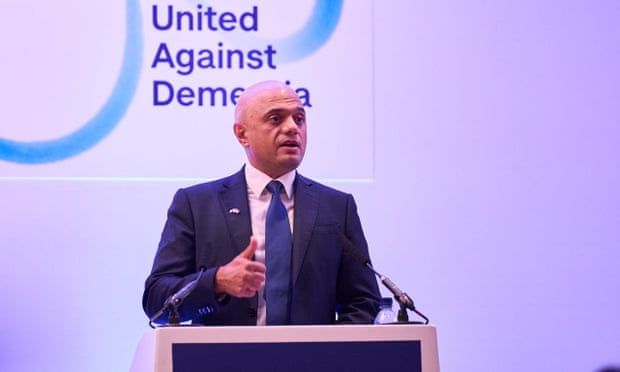 Campaigners welcome health secretary’s promise of ‘seismic shift’ in care, but say it must be backed by urgent funding and delivery
Sajid Javid has been warned that thousands of people living with dementia “need to see tangible change now” after he announced a 10-year plan to tackle the condition.

The health secretary told delegates at the annual conference of the Alzheimer’s Society his dementia strategy would include a major focus on prevention and research as he promised a “seismic shift” in how the condition is approached. The plan will look at why people fall ill, Javid said, with figures suggesting as much as 40% of dementia is potentially preventable.

Javid said he wanted his dementia strategy “to be more ambitious than anything we’ve done before” and suggested the combination of “a visionary plan” and “proper funding” coupled with “care and compassion” would be “unbeatable”. However, it later emerged the plan, which he said he had been developing since last summer, would not be published until later in the year.

Mark MacDonald, the associate director of advocacy and system change at the Alzheimer’s Society, said: “The secretary of state today spoke of the ‘seismic shift’ needed in dementia diagnosis and care and a bold 10-year plan that gives the UK’s largest killer the attention it needs.

“However, his words will mean nothing if not backed by equally ambitious funding and delivery mechanisms which put people with dementia at their heart, and who need to see tangible change now. We have now been waiting more than two years for the promised dementia moonshot to double research funding, which will help us improve care and find a cure.

“For too long government action has not matched the scale and impact of dementia. We welcome the secretary of state’s ambitious words today but we must now see this translate quickly into meaningful delivery plans for which ministers should be held accountable.”

In his speech to delegates at the conference, Javid said he wanted his dementia plan to be “more ambitious than anything that we’ve ever done before”. He added: “I’d like us to be as bold as we’ve been with our 10 year-plan for cancer.”

The health secretary announced a 10-year cancer plan in February, pledging to wage “a national war on cancer” so that “fewer people face the heartache of losing a loved one to this wretched disease”. The plan has yet to be published.
#COVID-19  #Covid
Add Comment