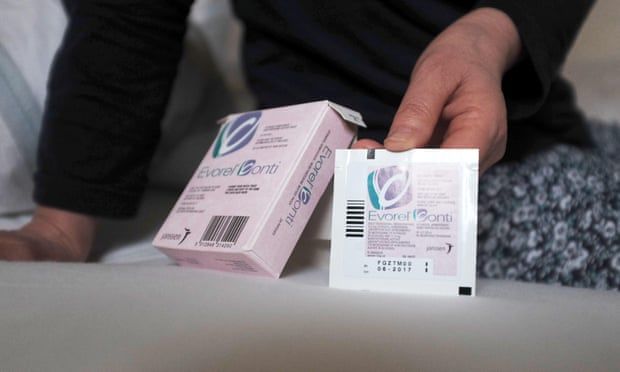 Shortages of HRT products have led to some women buying them on the black market or asking friends to buy medicines abroad for them.

Sajid Javid, the health secretary, told the Mail on Sunday he planned to tackle the problem by appointing a new HRT tsar with the role modelled on that of Kate Bingham, who successfully led the government’s Covid vaccine taskforce.

An estimated 1 million women in Britain are on HRT, which comes in patches, pills and gels. It helps to relieve the debilitating effects of menopause including anxiety, hot flushes and insomnia.

The shortages were raised last week in the Commons by Caroline Nokes, the Conservative MP and chair of the women and equalities committee.

She said pharmacies in her constituency had completely run out of HRT, “which leaves women of a certain age … without access to the oestrogen gel, which enables us to sleep and to work competently.”

Nokes told the Mail on Sunday: “You can’t help but feel that, if this was a drug used exclusively by men, they’d have sent in the army to beef up production by now.”

Javid said: “I know just how much women rely on HRT and that some have been struggling to get certain medicines. I’m determined to do all I can to make sure that supplies are meeting hugely rising demand and there is equitable access.

“I will be urgently convening a meeting with suppliers to look at ways we can work together to improve supply in the short and long term.

“It’s also clear to me that we need to apply some of the lessons from the vaccine taskforce to this challenge, so we will soon be recruiting for an HRT supply chairperson.”

Campaigners have argued that medical sexism and a lack of training means many women are left to suffer the symptoms of menopause, which also include depression and brain fog.

Research has estimated that 14m working days a year are being lost to the UK economy as a result of menopausal symptoms. One in four women who experience the symptoms – many at the top of their career – consider leaving their job.

HRT prescriptions in England have almost doubled in the last five years to 538,000 in December, according to recent figures. Manufacturers blame a combination of the rise in demand and ingredient supply problems for the shortages.

The Labour MP Carolyn Harris, co-chair of the UK menopause taskforce, which met for the first time in February, welcomed Javid’s intervention. “There are a lot of woman relying on him to improve the current situation,” she said. “We should never have been in this position.”

Katie Taylor, the founder of the support group the Latte Lounge, said it was “welcome news albeit long overdue”.

She added: “We’ve had messages from hundreds of women, many of whom are just absolutely desperate. They can’t get their usual prescription, so a lot of them are driving for hours to go to four, five or six different pharmacists.”
#vaccine  #Covid
Add Comment