NHS staff have been warned they could face a mandatory requirement to be vaccinated against Covid, with the health secretary saying he is “leaning towards” making the jabs compulsory for staff in England.

Sajid Javid said he had not made a final decision, but the move would put NHS staff in England broadly in line with the requirement for care home workers.

It comes as the chancellor is expected to announce £5.9bn for NHS England as part of financial measures this week to clear the backlog of those waiting for tests and scans, which has been worsened by the pandemic, and also to buy equipment and improve IT.

Critics have said that as well as resources, the government must address the fact that there are not enough staff to support services.

“There are around 100,000 that are not [vaccinated in the NHS] at this point but what we saw with the care sector is that when we announced the policy … then we saw many more people come forward and do the right thing and get vaccinated, that’s what I hope, if we can do the same thing with the NHS, we will see,” Javid told Sky News.

“I’m leaning towards doing it [mandatory vaccinations],” he added. This was echoed during a later interview with the BBC Radio 4’s Today programme, where he said it was the “direction of travel”.

“If they haven’t got vaccinated by now then there is an issue about patient safety and that’s something the government will take very seriously,” Javid said, declining to say when the move would come into force. But he added: “I don’t want to put a timeframe on it but it wouldn’t be months and months.” 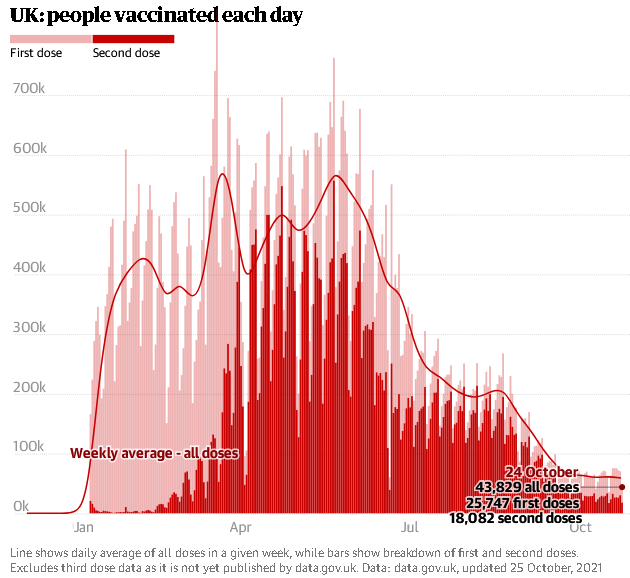 He also said he would wear a mask in the House of Commons chamber on Wednesday for the chancellor’s autumn budget because it would be crowded. But he stopped short of urging Conservative MPs to follow suit, as he told Today: “The guidelines are clear: it’s for people to make a personal decision on how they see the risk of them and those around them, and this is obviously a workplace setting, so it’s going to be a decision for them, but I can speak for myself.”

NHS leaders had a “mixed” view on mandatory vaccines for NHS workers, said Dr Layla McCay, the director of policy at the NHS Confederation.

She told Times Radio: We’ve spoken to our members about this, and it’s a bit of a mixed picture because most of them agree that in some ways, mandating the vaccine could be quite helpful to make sure that more people get the vaccine.

“But on the other hand, if some people decide they don’t want the vaccine that could lead to staff recruitment and retention problems and we’re going into this incredibly challenging winter.

“If we start to lose staff during this time that could be incredibly challenging, so it’s a real balance.”

Health workers should get vaccinated as a “matter of professional pride”, a member of the Joint Committee on Vaccination and Immunisation (JCVI) has said.

Jeremy Brown, a professor of respiratory medicine at University College London hospitals, who sits on the JCVI, told Sky News: “If you’re frontline NHS staff dealing with patients and meeting the general public you should be vaccinated – it’s a professional thing, it’s a safety thing.

“We know that quite a few infections [that] have occurred in the hospital have potentially come from staff rather than patients. And if you’re not vaccinated, I feel, you shouldn’t be dealing with patients or the general public – whether it should be compulsory it is always a tricky thing but I do think professionally each person should be vaccinated.”

He said he would not answer a question about whether staff should lose their jobs if they were not vaccinated, but added: “I think they should change their role, perhaps, not lose their job.

“I’m sure there are exceptions where there is a reasonable reason why somebody hasn’t been vaccinated or doesn’t need to change their role, but in general if you’re dealing with a patient on a regular basis, you should be vaccinated as a matter of professional pride and role.”