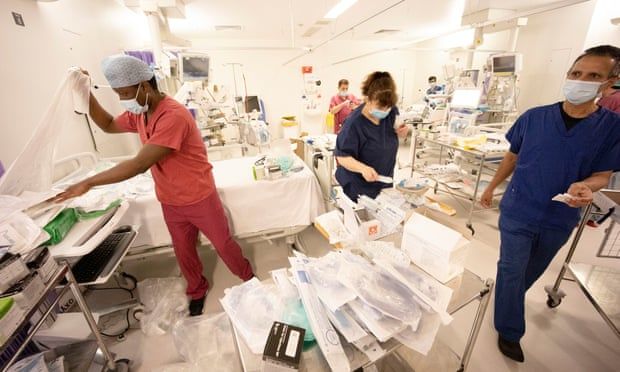 Exclusive: Prof Robert West says rhetoric about caution is ‘a way of putting blame on public’
A scientist advising the government has accused ministers of allowing infections to rip through the younger population in an effort to bolster levels of immunity before the NHS faces winter pressures.

The allegation comes after England’s remaining Covid restrictions were eased on Monday, with nightclubs throwing open their doors for the first time in the pandemic and all rules on social distancing and mask wearing dropped even as infections run high.

Ministers were made aware of scientists’ concerns about reopening nightclubs and other crowded, close-contact and poorly ventilated venues without testing or other checks in place. On Monday Boris Johnson made the surprise announcement that Covid passports will be required for such settings – but not until the end of September, in two months’ time.

“What we are seeing is a decision by the government to get as many people infected as possible, as quickly as possible, while using rhetoric about caution as a way of putting the blame on the public for the consequences,” said Prof Robert West, a health psychologist at University College London who participates in Sage’s behavioural science subgroup.

“It looks like the government judges that the damage to health and healthcare services will be worth the political capital it will gain from this approach,” West said, adding that ministers appear to believe the strategy is now sustainable – unlike last year – because of the vaccine rollout.

A large wave of infections, coupled with mass vaccination, would push the UK closer to “herd immunity”, where enough people in the population are resistant to the virus that it no longer spreads. The threshold for herd immunity with the Delta variant is unclear, but scientists estimate that transmission would need to be blocked in about 85% of the population. Ministers have repeatedly denied that achieving herd immunity by letting cases rise is the government’s goal.

Monday’s easing of restrictions removed social distancing, the work-from-home order and legal requirements around mask wearing, though ministers called on the public to remain cautious. The move prompted a flurry of regional mandates to maintain masks on public transport, including the London tube, buses and trains, and Manchester Metrolink trams. Legal limits on mixing indoors lifted at the same time, allowing all businesses to reopen.

The change in rules led some clubs to open at midnight on Sunday, leading to packed bars and dancefloors across England. Similar scenes in the Netherlands in recent weeks led the Dutch premier, Mark Rutte, to reimpose curbs on bars, restaurants and nightclubs as new cases rose sevenfold.

The shadow health secretary, Jon Ashworth, said: “Abandoning all precautions and allowing infections to climb not only risks further restrictions in the future, it condemns thousands to long-term illness and places huge pressure on the NHS. Rising Covid admissions are helping exacerbate a summer NHS crisis, with operations cancelled and increasing waiting times. It means we are heading into another difficult winter and high levels of virus circulating could see a vaccine-evading variant emerge. This is an utterly reckless strategy from Boris Johnson.”

Data from the Office for National Statistics show that coronavirus in England is now largely an infection among young adults. Cases in 11-to-16-year-olds are nearly four times more common, and in 16-to-24-year-olds nearly six times more common, than in 50-to-69-year-olds. While generally at low risk from the disease, young people can still develop long Covid and help fuel the epidemic, which drives up cases in those who are more vulnerable.

Prof John Drury, a social psychologist at the University of Sussex, is concerned about the changes that came into force on Monday, such as dropping the mandate on mask-wearing, which “sent a very strong signal” that the Covid crisis is now less serious.

Speaking in a personal capacity, Drury, who participates in meetings of the Sage behavioural science subgroup, said recent research showed that people use government policy to make judgments on risk and how to behave. “The overall message is that the actions by the public – not only mask-wearing, but also distancing and avoiding crowded places – are no longer required.”

This has already affected public behaviour, he said, though those ditching Covid precautions appear to be a large minority rather than the majority. “Fortunately, many people are aware of the rocketing infection rates and the risk posed to many people in society including the most vulnerable and are continuing to wear masks and keep their distance out of solidarity as much as self-protection,” Drury said.

A government spokesperson said: “Herd immunity has never been part of our pandemic strategy. Our approach has always been to protect the NHS and social care, save lives, and ensure as many people as possible are vaccinated as we learn to live with Covid-19.

“While the vaccination programme has substantially weakened the link between infection and serious illness or death, we have been clear about the need to exercise personal caution as we ease restrictions.

“We are encouraging settings to make use of the NHS Covid pass by requiring either proof of full vaccination or a negative test and we reserve the right to mandate certification if necessary to reduce transmission.”
#Boris Johnson  #Coronavirus  #COVID-19  #Johnson  #vaccine  #Covid
Add Comment