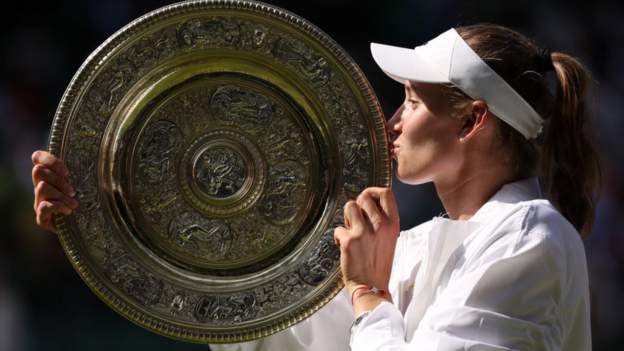 After a shaky first set, she improved and pressured Jabeur into errors.

Rybakina was born in Moscow and her victory comes in a year where Wimbledon banned Russians from playing.

The All England Club did not allow Russian and Belarusian players to compete at this year's tournament in response to Russia's invasion of Ukraine.

Rybakina, who changed allegiance in 2018 after receiving greater financial support from Kazakhstan, was presented with the Venus Rosewater Dish by the Duchess of Cambridge, who has publicly supported Ukraine's fight.

The 17th seed clinched victory with her first match point when Jabeur pulled a backhand wide.

Initially there was little emotion from the new champion, who simply raised her right arm in the air as part of a muted celebration.

After sharing a warm embrace with Jabeur at the net, Rybakina received a respectful round of applause before then running up a gangway of the stairs to hug her team.

Rybakina settles down and serves her way to victory

On only her second main-draw appearance at Wimbledon, Rybakina had quietly moved through the rounds this fortnight, using her height and power to great effect.

Eventually that also proved to be the case in a match against a player of contrasting style and personality.

Going into the final, Rybakina had dropped only one set when she fought back to beat Australia's Ajla Tomljanovic in the quarter-finals.

But Jabeur, full of slice and variety, settled the quicker to break Rybakina's serve twice and race away with the opening set.

Rybakina showed no nerves in a powerful semi-final display against 2019 champion Simona Halep, but handling those in all pomp and prestige of a first Grand Slam final was a different proposition.

Eventually she settled down and the contest suddenly took a change of direction at the start of the second set.

A loose service game from Jabeur was seized upon by Rybakina, who had begun to rediscover the level that got her to this stage.

Rybakina backed up the break for a 2-0 lead and, while she had to continue working hard for her holds, moved a double break ahead at 4-1 as the errors crept into Jabeur's shots.

After sealing the second set, Rybakina broke again at the start of the decider and Jabeur looked increasingly despondent.

But the tension mounted again in a sixth game that almost swung momentum back to world number two Jabeur.

After a 0-40 lead, Jabeur thought she had landed the second of three break points with a clipped forehand but the line-calling technology said it was out.

Rybakina fought back to hold and then broke in the seventh game to leave her serving for the championship.

Jabeur led 15-30 but sprayed a forehand wide to bring up championship point, which Rybakina took to become the youngest champion since Petra Kvitova in 2011 and the first woman since Amelie Mauresmo in 2006 to come back from a set down to win the final.

A popular and entertaining player, she had more support among the 15,000 crowd on Centre Court and the mood dampened as the match moved away from her.

Jabeur's story is one of an inspirational late bloomer who lacked patience in her younger days before finding the right mentality to complement her talent.

That has enabled her to win WTA tournaments, rise up the rankings and regularly break down barriers.

Known as the 'Minister of Happiness' in her country, Jabeur is a popular figure in Tunisia, the Arab world and Africa.

Jabeur's first appearance in a Grand Slam final came on the same day as Eid al-Adha - an important public holiday for Muslims.

While it did not turn out to be a double celebration, Jabeur will still receive a public reception when she returns home.

"I love this tournament so much and I feel really sad, but it's tennis - there is only one winner," Jabeur said.

"I'm trying to inspire many generations from my country. I hope they are listening."

You could tell that Ons wanted it so much - but sometimes it can be too much.

She really started well against Rybakina's serve in the beginning. But as the match went on, Rybakina just said 'I'm going to hit the ball harder.

She took the ball on the rise and took the time away from Jabeur - she even got more confident at the net but she really picked up her whole game.