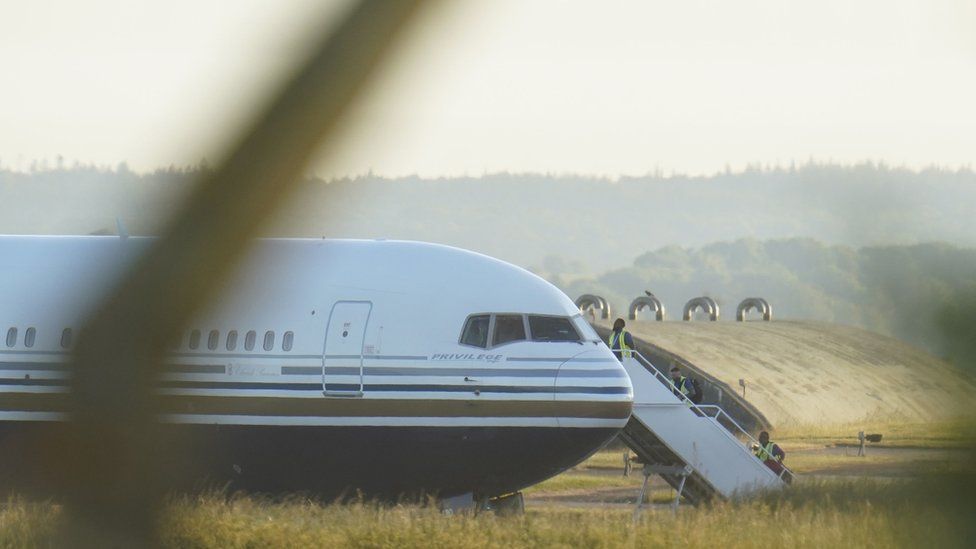 A last-minute legal battle is under way over the UK government's first flight transporting asylum seekers to Rwanda.

The European Court of Human Rights (ECtHR) says it has blocked the removal of one of seven passengers due to depart on Tuesday night.

An out-of-hours judge is currently examining the remaining half dozen cases and it is not clear whether the court will block the entire flight.

In a statement hours before the flight's planned departure, the ECtHR said it had granted an "urgent interim measure" in the case of an Iraqi man, known only as "KN".

The man, who is in his fifties, left Iraq earlier this year and crossed the English Channel to reach the UK, rather than claiming asylum in another European country. Doctors have since said he may have been a victim of torture.

KN's lawyers petitioned the ECtHR on Monday after a judge in London refused to stop his inclusion on the flight.

The European court has indicated KN should not be removed to Rwanda until three weeks after the final decision over the policy is made in the UK courts.

The ECtHR said that requests such as these were only granted on an "exceptional basis, when the applicants would otherwise face a real risk of irreversible harm".

That decision contradicts a ruling by judges in London, who had found no immediate risk to anyone sent to Rwanda.

A High Court judge ruled last Friday that there should be a full review of the Rwanda removals policy - but that the Home Secretary Priti Patel would be acting lawfully if in the meantime she sent some asylum seekers to Rwanda.

Should the policy be found to be unlawful some people could be returned to the UK from Rwanda.

The ECtHR, based in Strasbourg, said that its decision had been influenced by concerns raised by the UN's refugee agency that asylum seekers sent to Rwanda may not be able to get a fair hearing or would be left in unsafe conditions.

The European Court of Human Rights oversees a range of human rights laws to which the UK is a signatory, along with other nations. It is entirely separate to the European Union.

On Monday, the Court of Appeal, ruled that the first flight taking asylum seekers to Rwanda could go ahead, backing the decision of the High Court that it was in the "public interest" for the government to carry out its policies.

Earlier on Tuesday, four of the men due to be on the flight saw individual appeals to the High Court rejected.

*  It faces widespread opposition from more than 160 charities and campaign groups, a small number of which launch a legal challenge

*  Campaigners appeal the ruling but are unsuccessful

Prime Minister Boris Johnson also defended the scheme and said the government may "very well" need to change the law to help.

The policy has been criticised by human rights organisations, charities and the Church of England, with concerns being raised about Rwanda's human rights record.

But ahead of the first plane's arrival, Rwanda's government spokesperson Yolande Makolo said the plan was neither immoral nor a punishment and needed to be given a chance as Africa was not just a place of problems but also "a place of solutions".