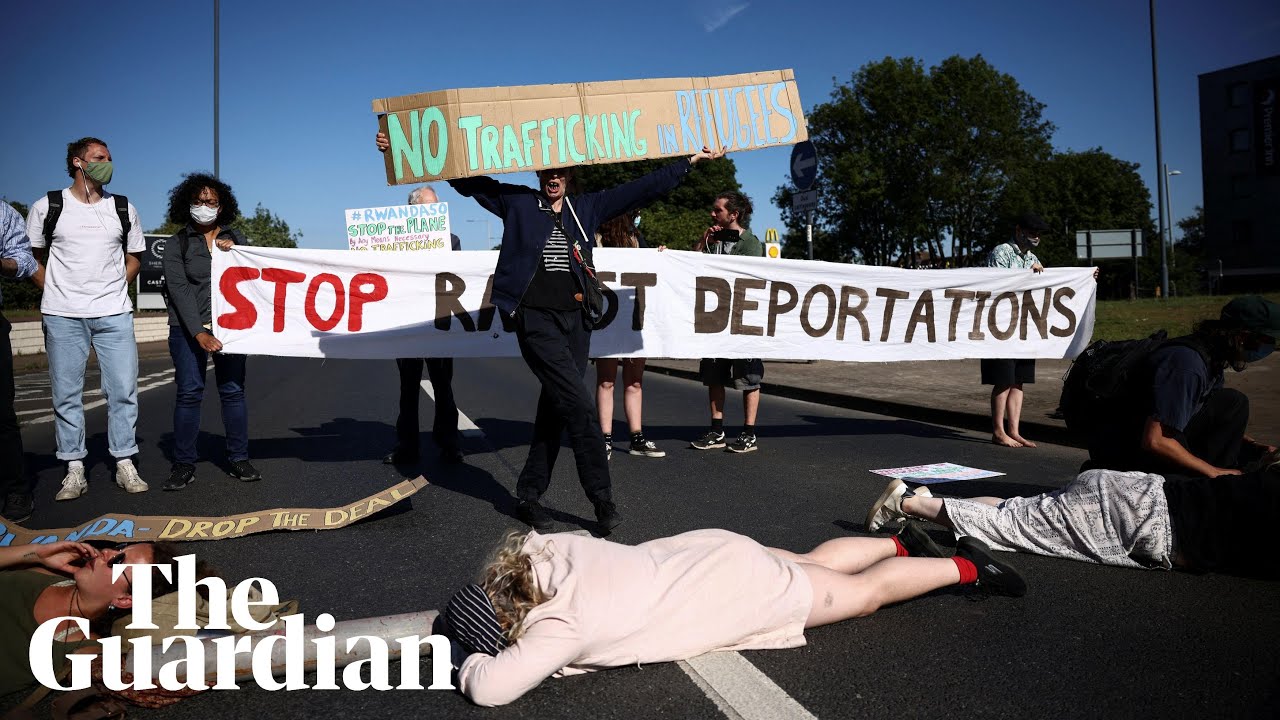 Boris Johnson’s plans to send thousands of asylum seekers to Rwanda were plunged into chaos last night after a dramatic 11th hour ruling by the European court of human rights.

Lawyers for one of the seven asylum seekers due to fly on Tuesday evening made a successful emergency application to the ECHR after exhausting applications to UK courts.

The decision led to claims from refugee campaigners that the remaining six asylum seekers destined for the east African country could also make last minute applications.

Lawyers for the six men were last night trying to send documents to the high court making similar applications under rule 39, which says that the court should examine a potential human rights violation.

The charity Care4Calais, which has been closely involved in legal interventions on behalf of those identified for deportation, said that the decision has opened the door for similar claims from the remaining six asylum seekers.

“This means it is now possible for the other six to make similar claims,” Clare Moseley from the charity said.

The ruling is a significant blow for Boris Johnson’s flagship policy which has promised to send thousands of asylum seekers 4,000 miles to the east African country.

It comes hours after the prime minister threatened to take the UK out of the ECHR and accused lawyers of aiding criminals exploiting refugees in the Channel.

A statement from the ECHR said an urgent interim measure had been granted in the case of KN, “an asylum seeker facing imminent removal to Rwanda”, v the UK.

“The European Court has indicated to the UK government that the applicant should not be removed to Rwanda until three weeks after the delivery of the final domestic decision in his ongoing judicial review proceedings,” it said.

The legality of the Rwanda policy will be tested in a full court hearing next month.

Stuart C McDonald, the SNP’s home affairs spokesperson, said Johnson has been using migration and the lives of vulnerable people as part of his “political theatre”, and called upon him to honour the ECHR ruling.

“It is now incumbent on Boris Johnson and Conservative MPs to respect the judgment and await the final ruling of the UK courts which should come next month in relation to the lawfulness of this policy,” he said.

A spokesperson for the Home Office declined to comment on the ECHR ruling.

Earlier, the prime minister hinted again that the UK could leave the European convention on human rights to make it easier to remove illegal migrants from the UK.

Asked whether it was time for the UK to withdraw from the ECHR following the government’s difficulty in implementing its Rwanda policy, the prime minister said: “Will it be necessary to change some laws to help us as we go along? It may very well be and all these options are under constant review.”

In April, at the launch of the Rwanda policy, Johnson had said that thousands of asylum seekers would be sent away, and that the first flight would leave in May.

The scheme has been beset with “teething problems”, Johnson has admitted. The number of asylum seekers expected to be sent to Rwanda fell from 130 at the start of last week, to 31 on Friday, to just seven on Tuesday.

Most successfully lodged appeals claiming that sending those seeking sanctuary in the UK to an east African state with a poor human rights record breaches their human rights or that they have been victims of modern slavery.

At a Cabinet meeting on Tuesday, Johnson also implied that lawyers representing asylum seekers are aiding human traffickers who charge thousands for journeys in dangerous boats across the Channel.

“They are, I’m afraid, undermining everything that we’re trying to do to support safe and legal routes for people to come to the UK and to oppose the illegal and dangerous routes,” he said.

The ECHR ruling involved a 54-year-old Iraqi asylum seeker who crossed the Channel in a boat.

He claimed asylum in the UK last month citing danger to his life in Iraq. Five days later, he was served with a notice of intent indicating that the Home Office was considering deeming his asylum claim inadmissible and relocating him to Rwanda.

A doctor at the detention centre issued a report saying that he may have been a victim of torture, it is understood. He was then served with removal directions to Rwanda for 14 June 2022. A letter from the court said that the asylum seeker should not be removed on Tuesday evening.

The court said it took particular account of evidence that asylum seekers transferred from the UK to Rwanda will not have access to fair and efficient procedures for the determination.

The decision also cited the ruling by Mr Justice Swift, who on Friday dismissed a request for an urgent injunction temporarily halting the flight.

Toufique Hossain, from Duncan Lewis solicitors, who brought the case on behalf of his client, said: “The court was concerned with materials before it, including from UNHCR, that asylum seekers transferred from UK to Rwanda will not have access to fair and efficient procedures for the determination of refugee status. In the light of this the court decided to grant the relief sought.”

A Rwandan government spokesperson, Yolande Makolo, told a press conference in Kigali earlier on Tuesday that there were “misconceptions” about what Rwanda is like and “some of this is perpetuated by the media”.

“When the first flights land here in Kigali the new arrivals will be welcomed and looked after and supported to make new lives here. We will provide support with their asylum applications, including legal support, translation services and we will provide decent accommodation.”

Downing Street justified the estimated £500,000 expense of the flight, saying that immigration costs the UK taxpayer £1.5bn every year already, with almost £5m a day on accommodating asylum seekers in hotels.

On Monday, 138 people reached the UK in three boats, while more than 200 arrived on Tuesday, with more than 10,000 migrants recorded as making the journey so far this year.