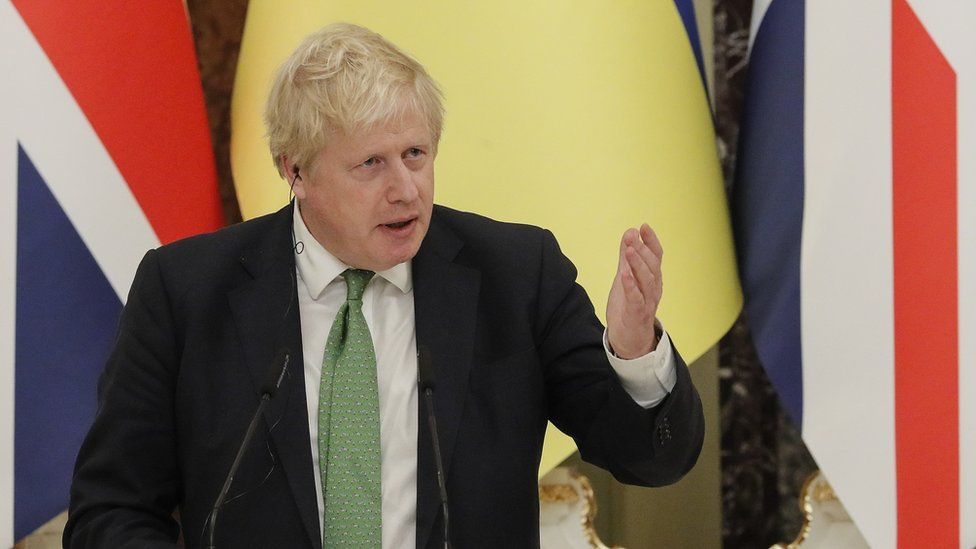 The UK will not be able to fly British nationals out of Ukraine if Russia invades, Armed Forces Minister James Heappey has warned.
He told the BBC the RAF would "not be in a position to go in" and people there should "leave now".

Mr Heappey said the advice had changed because Russia was in a position where it could attack "at no notice".

Russia has denied any plans to invade Ukraine despite massing more than 100,000 troops near the border.

The US also said Russia could invade "any day now" and told its own citizens to leave - although it said the US did not know whether President Vladimir Putin had made a final decision.

Both French President Emmanuel Macron and US President Joe Biden spoke with Mr Putin on Saturday.

Foreign Secretary Liz Truss said she spoke to her US counterpart, Secretary of State Antony Blinken and shared her "acute concerns" of military aggression against Ukraine within days.

She tweeted: "We agree Russia will face massive consequences for any invasion, including severe sanctions. Russia must deescalate and engage with Nato proposals."

Moscow has accused Western countries of stirring up hysteria.

Following a call with world leaders on Friday, Prime Minister Boris Johnson said he feared for the security of Europe and urged allies to have a "heavy package of economic sanctions ready to go" should Russia attack, Downing Street confirmed.

Speaking to BBC Breakfast, Mr Heappey said: "We are now confident that the artillery systems, the missile systems and the combat air are all in place that would allow Russia to launch - at no notice - an attack on Ukraine."

But he warned there would be "a big difference between what [people] may have seen on their TV screens in Afghanistan over the summer and what may happen over the next week or so" - referring to the international airlift to rescue people after the fall of Kabul to the Taliban last year.

"The Royal Air Force will not be in a position to go in and to fly people out so they need to leave now by commercial means or drive out of Ukraine into a neighbouring country," he said.

British troops helping with training in Ukraine will also be leaving the country over the weekend, Mr Heappey added on BBC Radio 4's Today programme. "There will be no troops in Ukraine if there's going to be a conflict there."

Some embassy staff are also being withdrawn but British ambassador to Ukraine, Melinda Simmons, said on Twitter: "I am staying in Kyiv and continue to work there with a core team. The embassy remains operational."

The BBC's Paul Adams in Kyiv said there were signs of urgency and departure at the British embassy, with staff loading bags into a car and driving off. Nobody seemed keen to talk.

The capital does not feel like a city in crisis though, our correspondent added.
#Boris Johnson  #Afghanistan  #Joe Biden  #Johnson
Add Comment