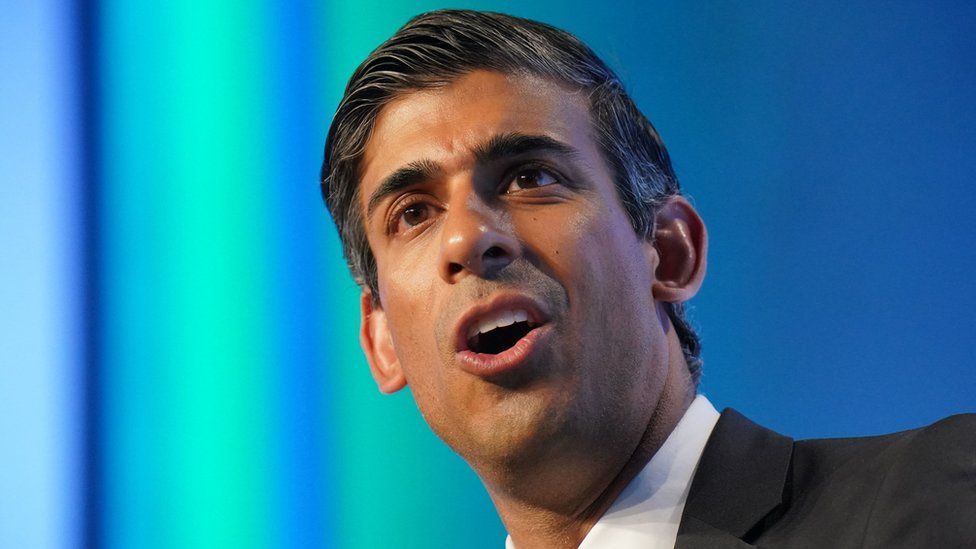 In a speech to businesses, he said the government was "ready to do more" to help households facing soaring energy, fuel and food costs.

He also said he would cut taxes for businesses to encourage them to invest.

It comes as a think tank said the poorest were being hit hardest by steep rises in energy bills.

UK inflation jumped to 9% in the 12 months to April, up from 7% in March and the highest level it has reached since 1982.

Inflation is the rate at which prices are rising. For example, if a bottle of milk costs £1 and that rises by 9p, then milk inflation is 9%.

At the annual CBI dinner, the chancellor told businesses the economic situation was "extremely serious", with the country facing "a perfect storm of global supply shocks", including the impact of the war in Ukraine and lockdowns in China.

"There is no measure any government could take, no law we could pass, that can make these global forces disappear overnight," he said.

"The next few months will be tough. But where we can act, we will."

However, he added that he "cannot pretend" it will be easy to cut costs for families.

Mr Sunak also called on businesses to boost investment and training in order to grow the economy and help ease the cost of living crunch.

"And as I've said previously, our firm plan is to reduce and reform your taxes to encourage you to do all those things," he said.

"That is the path to higher productivity, higher living standards, and a more prosperous and secure future." 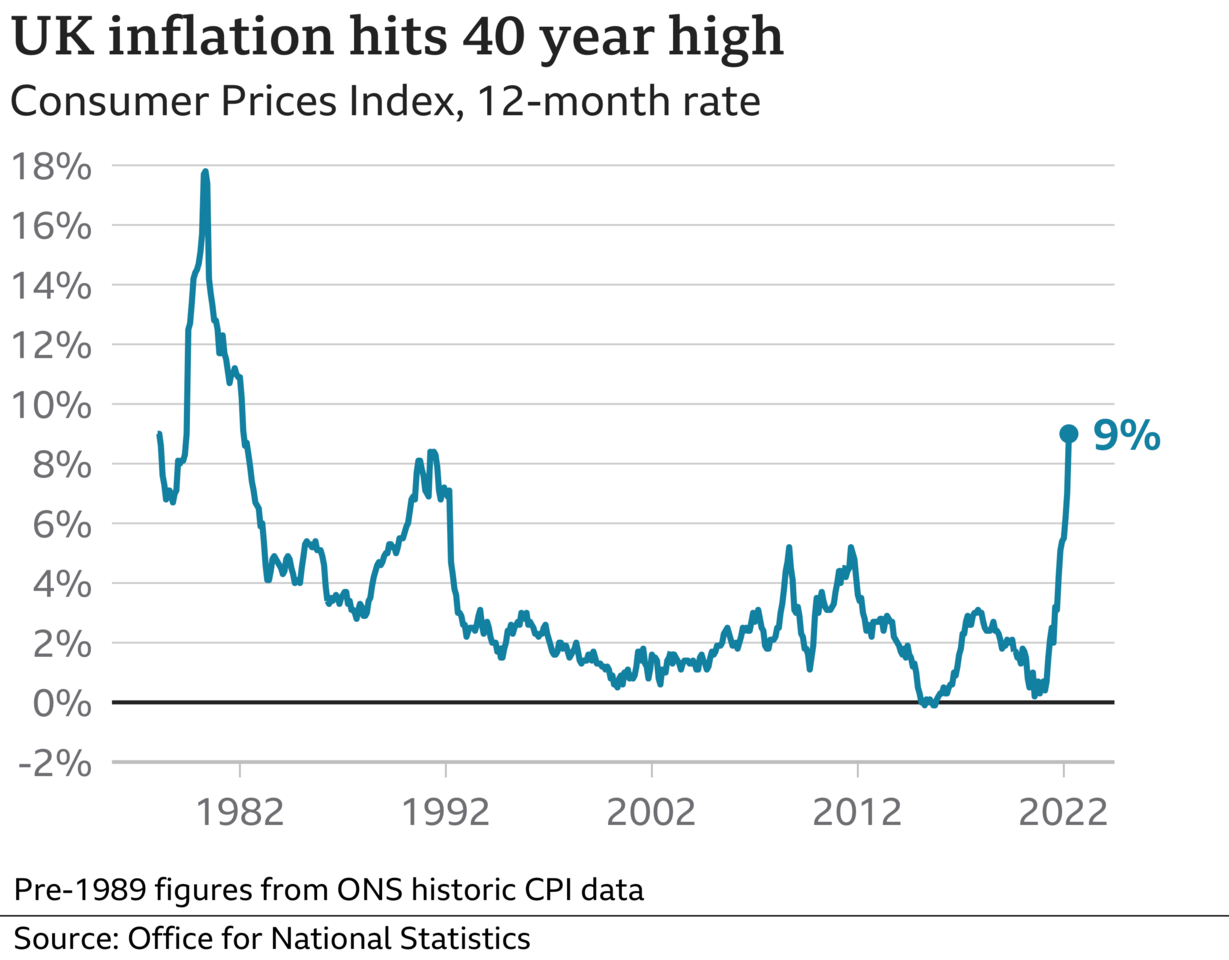 Around three quarters of the rise in inflation in April came from higher electricity and gas bills, according to the Office for National Statistics (ONS).

A higher energy price cap - which is the maximum price per unit that suppliers can charge customers - kicked in last month, meaning homes using a typical amount of gas and electricity are now paying £1,971 per year on average.

Fuel prices have also surged, with the RAC motoring group warning on Wednesday that petrol and diesel prices have hit new records of £1.68 and £1.81 per litre respectively.

The prices of most other goods and services have risen as well, the ONS said, while wages are failing to keep pace with inflation and falling in real terms.

Up until now households of all incomes had faced similar rates of inflation, but the poorest are now being hit hardest by rising prices because they have to spend far more of their household budgets on gas and electricity, the Institute for Fiscal Studies said.

Retail Economics, a research consultancy, said the poorest people were experiencing a drop of £59 per month in their discretionary spending budgets compared to this time last year.

Citizens Advice said "the warning lights could not be flashing brighter" and the government needed to offer households more support.

"There are desperate stories behind these figures," Dame Clare Moriarty, the charity's chief executive, said. "People washing in their kitchen sinks because they can't afford a hot shower; parents skipping meals to feed their kids; disabled people who can't afford to use vital equipment because of soaring energy bills." 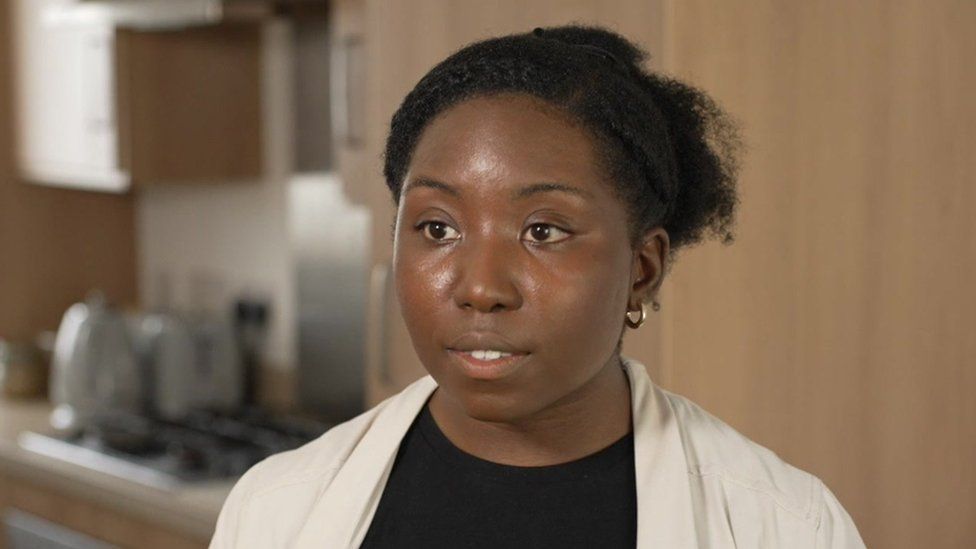 Health analyst Cheryl Holmes, a mother-of-two, said she was trying to keep her living costs "as low as possible" by spending less on food and clothes, and cancelling TV subscriptions.

"I've already for several years been turning the lights off in each room, setting the heating on a timer, making sure I'm using a full dishwasher and washing machine and I'm running out of ideas.

"It's a battle and it seems like there's not really much more that I can do."

UK inflation is simply not supposed to hit levels this high. And as the Bank of England Governor Andrew Bailey has said, these sorts of rises hit the poorest the hardest.

9% is an average across the population. The older Retail Prices Index measure is already at 11%.

But Mr Bailey's institution has a battle on now to get this under control. The really painful issue is that this rate will sustain and is on course to get higher over the course of this year.

And only this week he acknowledged that there was "not a lot" the Bank could do about four-fifths of the anticipated rise, as it is being imported from globally rising prices for energy and food.

The Bank of England has warned the UK's cost crunch could leave the country on the brink of recession, with inflation peaking at over 10% later this year due to further expected rises in energy bills.

The rising cost of living is already seeing people spending less money and cutting down on car journeys due to high fuel costs. And it is impacting the economy, which shrank in March.

The Bank has raised interest rates four times since December to try to cool prices, but MPs have accused it of not doing enough.

This week Governor Andrew Bailey defended its response, insisting inflation was being driven by global forces that limited the Bank's room for manoeuvre. 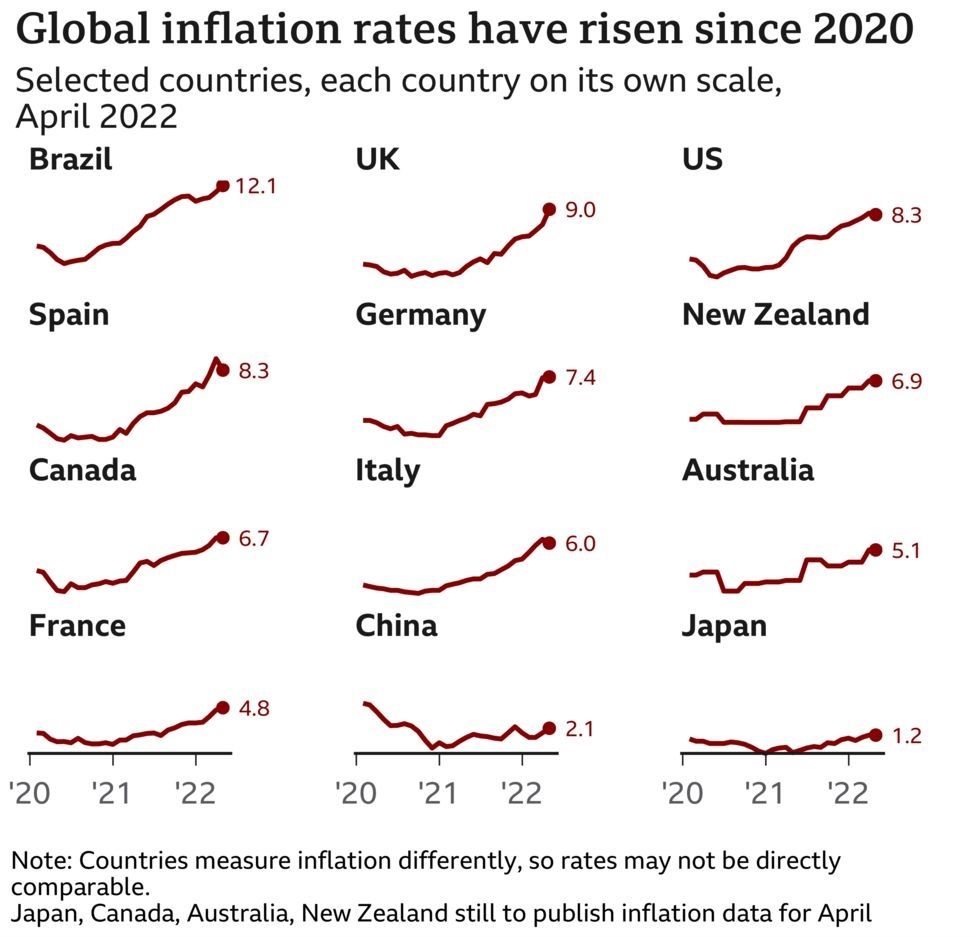