Former Chancellor Rishi Sunak has topped the third MPs' vote for the next Tory leader and prime minister, with backbencher Tom Tugendhat eliminated.

The four remaining candidates go to another round of voting on Tuesday.

The field will be cut to two on Wednesday, with Conservative Party members then having the final say.

The placings were the same as in the second round of voting last Thursday, but Mr Sunak picked up 14 more votes, Ms Badenoch nine and Ms Truss seven.

Ms Mordaunt's support dropped by one vote, as did Mr Tugendhat's.

In a statement, Mr Tugendhat said: "I want to thank my team, colleagues and, most of all, the British people for their support.

"I have been overwhelmed by the response we have received across the country. People are ready for a clean start and our party must deliver on it and put trust back into politics."

A source within Ms Truss's campaign told the BBC: "We've narrowed the gap to Penny pretty considerably. Story is Penny going backwards. All to play for!"

But Ms Mordaunt said: "My vote is steady and I'm grateful to my colleagues for all their support and thrilled to be in second place once more."

And a Badenoch campaign source said: "Kemi is pleased to have taken it to the next vote. She has momentum over both Mordaunt and Truss. It's all to play for and Kemi is in it to win." 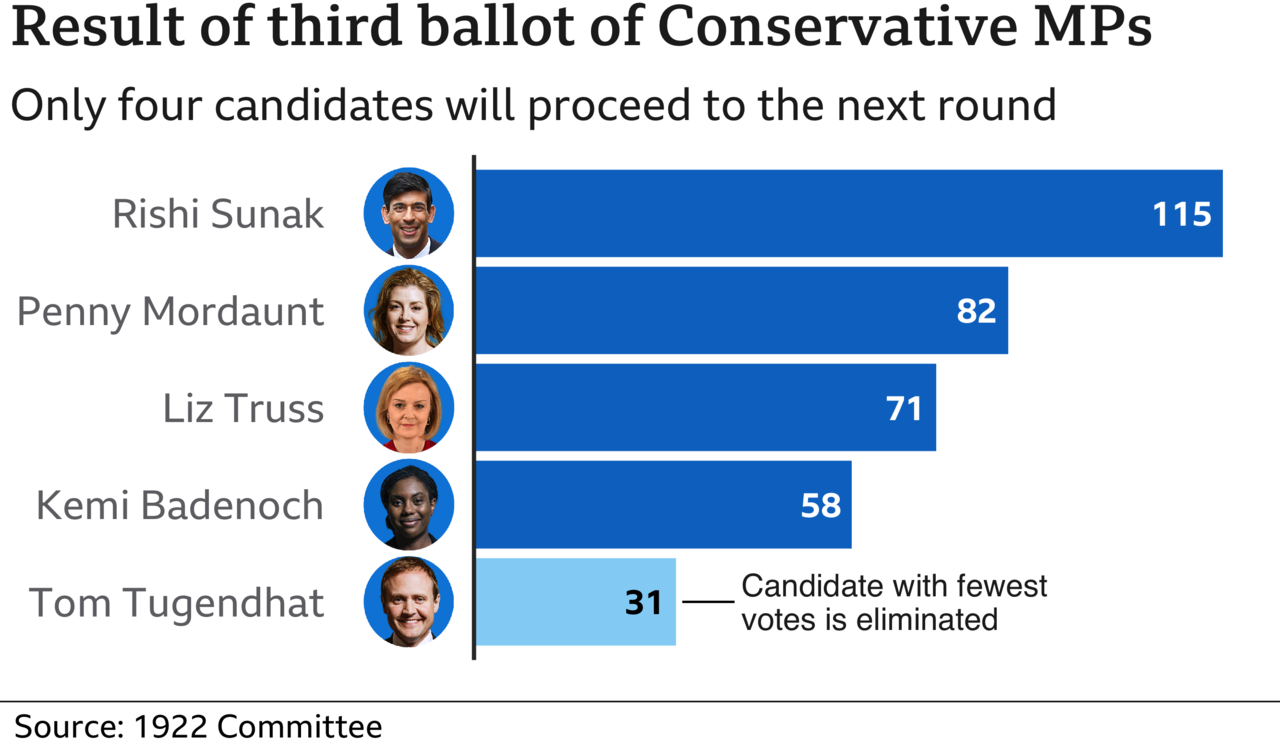 The Tory leadership contest has become increasingly bitter and personal in tone, as those left in it fight for the final two places.

Mr Tugendhat earlier rejected calls to stand aside and throw his support behind another candidate, as did Ms Badenoch.

But most of the rancour has been between Mr Sunak, Ms Mordaunt and Ms Truss, who clashed in an ITV-hosted debate on Sunday over their economic policies.

A Sky News debate scheduled for Tuesday was cancelled after Mr Sunak and Ms Truss declined to take part, and amid concern among senior Tories that angry arguments in public could damage the party.

The new Tory leader and prime minister is due to be announced on 5 September.

In seven weeks' time, we will have a new prime minister.

For centuries in this country, with a few exceptions, we have collectively been in the habit of getting white men to run the place.

We now know for certain that that isn't going to happen this time around.

And so to Round Four.

Separately, the government won a vote of confidence in itself in the House of Commons.

It could have led to a general election, had ministers been defeated.

But this would have required dozens of Conservative MPs to side with Labour and other opposition parties.

Opening the debate, Prime Minister Boris Johnson said he was still in charge of "one of the most dynamic governments of modern times".

He told MPs: "He [Labour leader Sir Keir Starmer] wants [a confidence vote] and since they want one, it's his constitutional prerogative, we will comply and we will win."

He also told the Commons: "Some people will say as I leave office that this is the end of Brexit, and the Leader of the Opposition and the deep state will prevail in its plot to haul us back into alignment with the EU as a prelude to our eventual return, and we on this side of the House will prove them wrong, won't we?" Tory MPs cheered in response.

Sir Keir responded to the PM's speech, saying: "Unlike his predecessors, this prime minister has not been forced out over policy disagreements.

"And despite the delusions he has fostered in his bunker, he has not been felled by the stampede of an eccentric herd. Instead, he has been forced out in disgrace."