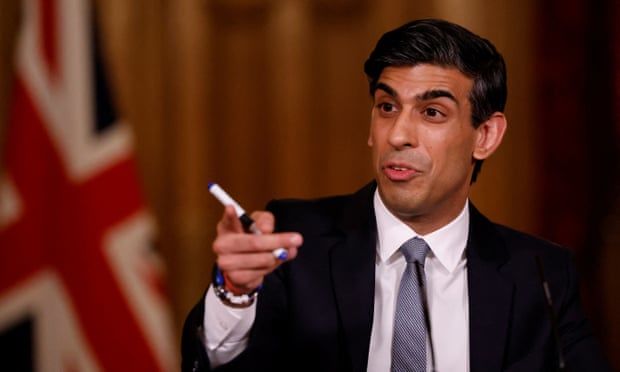 Treasury releases messages sent by chancellor to former PM and says Cameron phoned junior ministers
Rishi Sunak has been accused of trying to smooth the way for Greensill Capital to gain special access to emergency Covid loans after the release of text messages showing the chancellor told David Cameron he had “pushed the team” to see if it could happen.

The Treasury also revealed that the former prime minister “informally” phoned two other ministers from the department, and sources said he sent “multiple” texts to Sunak’s personal phone. The Treasury refused to release those texts, saying they were sent “with an expectation of confidence”.

Cameron, an adviser to and shareholder in the now-collapsed finance firm, has remained silent over the scandal since it emerged more than a month ago.

Labour said the text messages from Sunak in April last year to the former prime minister, released after a freedom of information request, could have broken ministerial rules and called for a full investigation.

The messages shed new light on how Cameron lobbied for Greensill to qualify for the largest possible tranche of government-backed loans under the Covid corporate financing facility (CCFF), and Sunak’s responses.

Two texts from Sunak to Cameron were released on Thursday. The first, from 3 April, acknowledged a message from Cameron and promised a response that evening or the next morning.

It said: “Hi David, thanks for your message. I am stuck back to back on calls but will try you later this evening and if gets too late, first thing tomorrow. Best, Rishi.”

In the second, from 23 April, Sunak explained that he hoped to find a way for Greensill to qualify for the largest available government-backed loans under the CCFF.

“Hi David, apologies for the delay. I think the proposals in the end did require a change to the Market Notice but I have pushed the team to explore an alternative with the Bank that might work,” Sunak wrote. “No guarantees, but the Bank are currently looking at it and Charles should be in touch. Best, Rishi.”

“Charles” is understood to refer to Charles Roxburgh, the second most senior civil servant in the Treasury.

Earlier documents released under freedom of information rules showed that the day after Sunak’s second text, Roxburgh spoke to Greensill Capital to expand on Sunak’s offer. Several other calls followed, but in June the company was told it did not qualify. Greensill Capital collapsed in March this year, putting 5,000 jobs at risk at the UK firm Liberty Steel, which it had financially backed.

The messages “raise very serious questions about whether the chancellor may have broken the ministerial code”, said Anneliese Dodds, the shadow chancellor. “They suggest that Greensill Capital got accelerated treatment and access to officials, and that the chancellor ‘pushed’ officials to consider Greensill’s requests.

“The chancellor’s decision to open the door to Greensill Capital has put public money at risk. There must be a full, transparent and thorough investigation into the chain of events that saw Greensill awarded lucrative contracts, the freedom of Whitehall and the right to lend millions of pounds of government-backed Covid loans.”

Margaret Hodge, a former chair of the public accounts committee, tweeted: “These revelations show a deep culture of corruption that goes to the heart of this government. This is taxpayers’ money, NOT Tory party money … The chancellor should never have engaged with David Cameron. He should never have phoned Cameron back … We are turning into a morally bankrupt state.”

Cameron’s role in lobbying ministers directly has prompted significant criticism, amid growing evidence of the influence enjoyed during Cameron’s tenure inside No 10 by Lex Greensill, the Australian financier whose company became a leading provider of so-called supply chain finance.

Greensill became so embedded within Downing Street that by 2012 he had an official No 10 business card describing him as a “senior adviser”. Cameron has refused to comment on events.

The Treasury statement on Thursday said that “in the interests of transparency” it could confirm that Cameron also “reached out informally by telephone” to John Glen and Jesse Norman, two junior ministers in the department.

It declined to publish Cameron’s texts, saying: “These communications were made by David Cameron in his capacity as an employee of Greensill, and with an expectation of confidence.”

In a statement released by the Treasury, Sunak said: “It is right that as an institution the Treasury engages with stakeholders and considers policy suggestions that are put to us, especially in an unprecedented crisis. In this instance, it became clear through officials’ discussions with Greensill that their proposal was not workable and would not deliver sufficiently for UK SMEs. And I stand by my decision to reject their request.”

A Treasury source said the department was not obliged under freedom of information laws to release the texts, but it had done so “in order to reassure beyond doubt that there was no wrongdoing and that he acted with integrity and propriety”.
#Covid
Add Comment