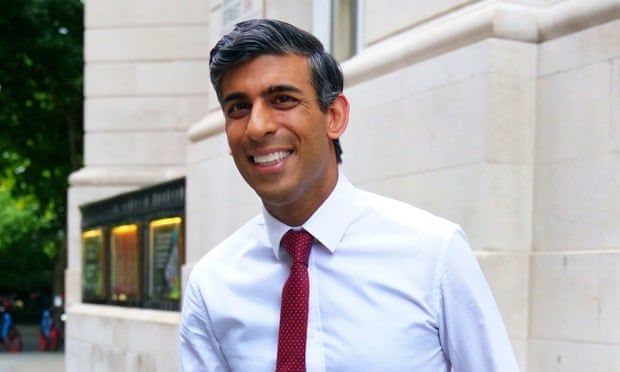 His attack came as a new poll of Tory party members gave Truss a commanding lead in the race to become prime minister.

Tax and spending has become the key battleground in the hard-fought contest, with Sunak insisting that cutting taxes immediately, as Truss has promised, would risk exacerbating the cost of living crisis.

Polling of Tory members by YouGov published on Thursday put Truss significantly ahead, by 62% to 38%. With ballot papers expected to drop in the next few days, the candidates will take part in 12 hustings across the country before a result is announced on 5 September.

Sunak has repeatedly portrayed himself as the candidate willing to have a “grownup conversation” about the economy instead of telling what he has dismissed as “fairytales”. Asked about the impact of Truss’s tax cut plans, Sunak said: “Yes, I think it would be inflation.”

With inflation already at a 40-year high, he told LBC: “My strong point of view is if the government goes on a huge borrowing spree, that is only going to make that situation worse. And that will mean that the problem will last longer.”

He pointed to the potential impact on homeowners, saying: “It’s going to push up their mortgage rates, if interest rates have to go up very high to deal with that.”

Truss doubled down on her insistence that her tax-cutting plans – which include reversing the recent national insurance increase, and cancelling a rise in corporation tax – were affordable and would “decrease inflation”.

Speaking on a campaign visit to Peterborough, Truss told reporters she would still implement Boris Johnson’s social care cap, which the national insurance rise was earmarked to fund.

“We can afford it within our budgets. We didn’t have to do the national insurance rise. It’s still the case that, with my plans … we can start paying back debt within three years,” she said.

The cap, due to come in next year, will limit to £86,000 the amount that an individual is forced to spend on their own care.

With both candidates claiming they are best placed to beat Keir Starmer’s Labour party, Truss also claimed Sunak’s tax increases risked triggering a recession that could lose the Tories the next election.

“I think the problem is that if we continue with our current economic policy, which is forecast to lead to a recession, it will be very hard for Conservatives to win an election,” she said.

Truss also said she would seek private-sector sponsorship to fund a new Royal Yacht – a £200m project Johnson had planned to pay for with taxpayers’ money.

“I support the idea of promoting our trade around the world. What I would be seeking is to get investment into a yacht looking to the private sector to assist with that, making it financially viable,” she said.

Labour insisted neither candidate would offer a fresh start after 12 years of Conservative government. The shadow chief secretary, Pat McFadden, said: “Both Rishi Sunak and Liz Truss offer more of the same. They are the continuity candidates. Neither of them has a plan for dealing with our stagnant economy – in fact, they have both presided over it.”

Daisy Cooper, the Liberal Democrats’ deputy leader, said: “While Rishi Sunak and Liz Truss argue amongst themselves, people are suffering because of the tax rises they brought in. We’re stuck with a zombie government and ministers focusing on the leadership campaign instead of doing their jobs.” 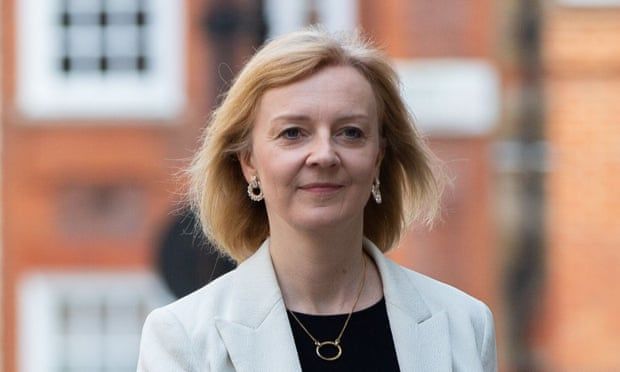 Liz Truss at her campaign office in London.

Analysis from the Institute for Fiscal Studies (IFS) suggested Truss’s promises were ultimately likely to lead to public spending cuts. “They will mean higher borrowing or less public spending, or some combination,” it said.

Responding to Truss’s suggestion that she could rewrite the government’s fiscal rules to open the way to more spending, the IFS analysis added: “In this context it is always important to remember that, whatever a chosen set of self-imposed fiscal rules might allow in the short term, in the end, lower taxes do mean lower spending.”

The former Conservative chief secretary to the Treasury David Gauke said he was concerned about Truss’s plans. “The thing that worries me most about it is, what does it do for the sustainability of the public finances?” he said.

He said spending cuts would be extremely difficult in the current circumstances. “The spending pressures are immense, and only going to get greater,” he said. “The next election will, I suspect, be fought more on public services than it will on tax rates.”

As well as highlighting her tax cut pledges, Truss promised to review the possibility of treating households as a single entity for tax purposes, to incentivise stay-at-home parents and carers.

Speaking during a visit to Little Miracles, one of a network of largely self-funded centres caring for children with disabilities and life-limiting conditions, she said she would specifically review the taxation of families.

“Hardworking families are the bedrock of a stable society, and one of my top priorities as prime minister would be easing the tax burden on families. They don’t just look after themselves, but also build communities, charities and even businesses,” she said.

The Labour MP Stella Creasy said: “Families across this country are crying out for affordable childcare so that they don’t have to choose between their career and their kids. Instead of helping them and investing in provision, Liz Truss seems to think taxes should be used to make women stay home instead. It shows you this Tory party wants to take Britain back to the 1950s, not help everyone thrive in the 2020s.”

In his LBC interview, Sunak repeatedly stressed his family’s relatively humble background, and described himself as a “practising Hindu”, saying he had returned to the temple his family still attends in Southampton recently.