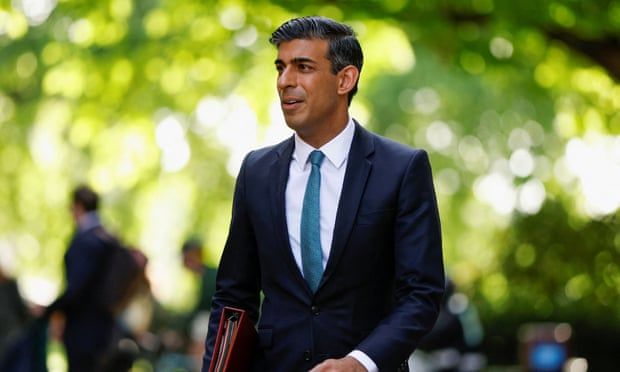 Analysis: Increases to income and corporation tax and higher NICs have contributed to the biggest UK tax burden since the 1950s

During his two years at the Treasury, Rishi Sunak’s tax policy has been characterised by large temporary cuts – to cushion the financial blow from the pandemic – followed by even larger and permanent rises running up to, and beyond, the next election in 2024.

The chancellor stressed that bringing down the annual deficit was a priority after he spent £400bn more than he had planned in 2020 keeping the economy afloat. With little room to cut welfare, as witnessed by this week’s £15bn of extra spending to cope with the cost of living crisis, he said the Treasury’s finances could only be shored up with higher taxes. 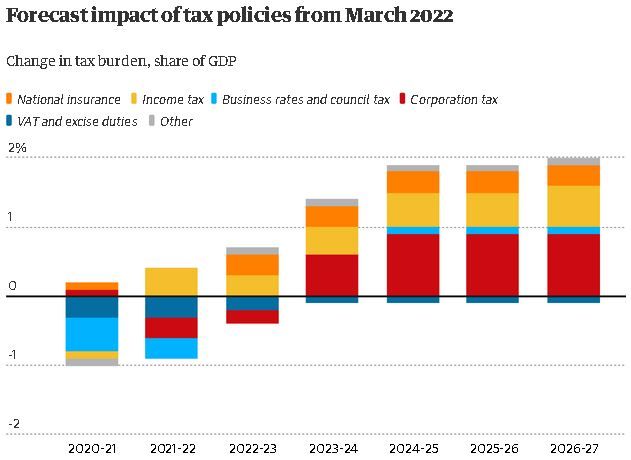 The Institute for Fiscal Studies (IFS), a tax and spending thinktank, said it was struck by how in little over a year Sunak had imposed tax rises of a similar scale to those seen during 10 years of Gordon Brown’s chancellorship, and that was before a planned £5bn windfall tax on oil and gas companies was included. The end result is the biggest overall UK tax burden since the 1950s. Here we examine three of the biggest rises:

In September 2021, the government announced plans to introduce a health and social care levy of 1.25 percentage points that would be added to the national insurance contributions (NICs) of staff and employers.

In the teeth of angry protests from Tory backbenchers, Sunak pushed up the main rate for employees from 12% to 13.25%, while employers were told to pay 15.05% from April 2022.

Labour said it was the wrong time to raise taxes and was in stark contrast to the UK’s European neighbours, who were stimulating their economies with extra investment. 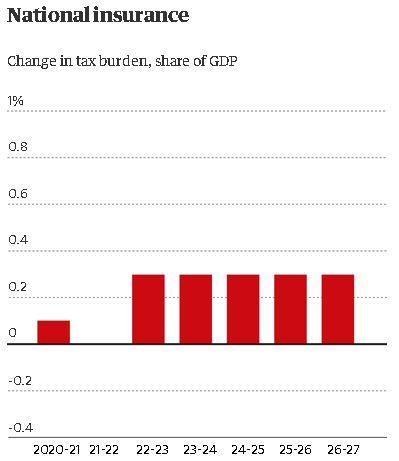 Dissent inside the cabinet forced Sunak to recalibrate the tax when he produced his March 2022 budget statement. He halved the £12bn he planned to raise by increasing the threshold at which workers start paying class 1 and 4 national insurance to £12,570. That adjustment will not take effect until 6 July this year, while the rise in NICs came into force at the start of April. 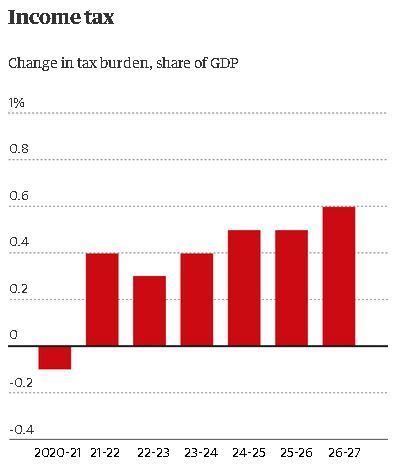 Increases in income tax, and especially the basic rate of 20%, are usually off-limits for any government. It means changes to the biggest generator of tax receipts are rare. Labour imposed a 50p in the £1 tax rate on those earning more than £150,000, which was largely seen as a “banker tax” in the wake of the financial crash.

George Osborne reduced the “additional” rate to 45p in 2013 and successive Conservative governments have campaigned to reduce income tax at the earliest opportunity.

So it proved hugely controversial when Sunak said in his 2021 spring budget that he would freeze personal tax thresholds, dragging more low-income households into paying the basic rate and those currently with earnings nearing £50,000 into paying the higher 40% rate. The freezes are forecast to last five years and raise around £13bn a year for the Treasury by 2025/26.

Sunak became the first chancellor in 47 years to increase corporation tax when he told MPs last year that the headline rate would begin rising over five years to 25% from April 2023. 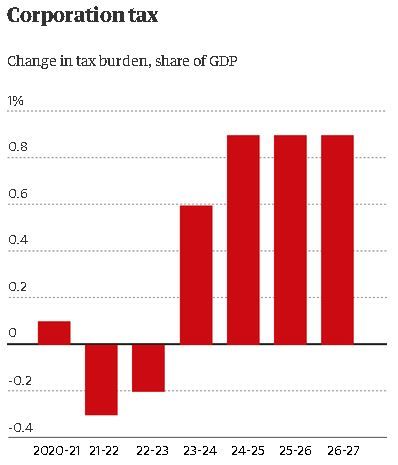 Sunak turned this argument on its head, saying the higher rate would generate £47.8bn in extra revenue by April 2026.

Adding to the confusion in Tory circles, the 25% top rate will be higher than the average headline rate of corporation tax in the EU, which was 22.2% in 2020, and the 21% headline rate in the US. It is also similar to the 26% advocated by the Labour party under its previous leader, Jeremy Corbyn.

The IFS said the corporation tax rise would ramp up the UK tax burden by an eventual 2% of GDP, equivalent to around an extra £46bn in government income in today’s money.