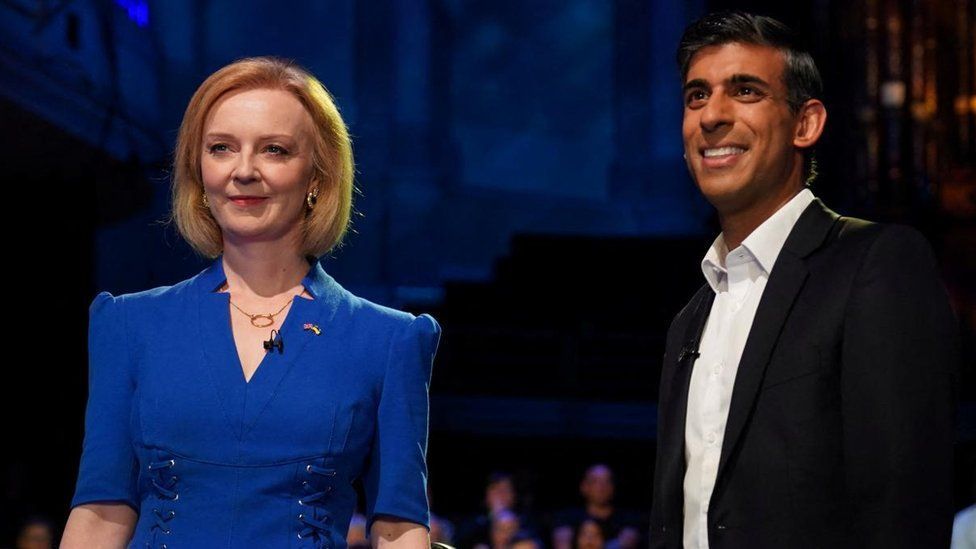 Conservative leadership hopeful Rishi Sunak has said he would introduce a £10 fine for patients who repeatedly miss GP or hospital appointments.

Mr Sunak told the Sunday Telegraph he wanted to be "transformational" and "do something brave and... different".

His rival Liz Truss meanwhile unveiled plans to ensure students who get top grades would automatically be invited to apply to Oxford or Cambridge.

"I can be trusted to deliver as the education prime minister," she said.

The two final candidates for party leader - and prime minister - are setting out their policies and visions as Conservative members prepare to receive their ballots from Monday.

Ms Truss has released a six-point plan targeting reform in the education sector, saying she wants to give "every child the tools they need to succeed".

Among the foreign secretary's proposals is widening access to top universities, and putting less emphasis on predicted grades.

Students would be allowed to apply to universities after receiving their A-level results, under a new post-qualification admissions system, Ms Truss has said.

A similar proposal from the Labour Party in 2019 was welcomed by the Sutton Trust as being potentially beneficial to disadvantaged students, who have lower predicted grades. But education leaders warned that the plan could require a rethink of the academic calendar.

Ms Truss also said that students receiving top grades would be automatically invited to apply to Oxford and Cambridge.

It was not clear how the plans would work in practice, and a source close Ms Truss said details would be reviewed if she became prime minister.

James Turner, chief executive of the Sutton Trust, said it was the "right aspiration" to ensure bright students from every school have a route to Oxbridge.

But he said it may be more effective to expand the use of contextual admissions - where universities reduce their grade requirements for disadvantaged students to reflect that they may be less likely to achieve top grades at school, but can still succeed in higher education.

Ms Truss added that she wants to expand existing academy schools that are high performing, and replace failing establishments with free schools. She also indicated she would end a ban on new grammar schools in England.

He told the Sunday Telegraph patients would be given the "benefit of the doubt" the first time they missed an appointment without providing sufficient notice, but that further absences would incur a £10 charge.

The system would be "temporary" as Covid backlogs were cleared, he said.

The former chancellor gave few details of how the fine system would work, but said: "If we have people who are now showing up and taking those slots away from people who need [them], that's not right.

A source close to Ms Truss said the policy would hit those who were "already worse-off", and give doctors extra work.

He added: "It would fundamentally change the principle that the NHS is free at the point of need."

Mr Sunak's team said GPs and hospital trusts would be allowed to use their discretion to waive a fine in exceptional circumstances, for example if a patient had a personal emergency.

As of February, six million people were on NHS waiting lists in England - one in nine of the population.

Ministers have warned that the waiting list for hospital treatment will not begin to fall for two years.

Separately, Mr Sunak has said he wants to reduce the number of empty shops on Britain's high streets and crack down on graffiti and littering.

"I want to slash the number of empty shops by 2025 and make sure that they are turned into thriving local assets, supporting skills, local businesses, economies and creating jobs," Mr Sunak said.

"They will be joined by vital public services - like police stations and job centres."

Both candidates have fired out a glut of policy announcements in recent days.

This race still has weeks to run, but next week is key.

Tory members get their ballots on Monday and both camps expect many members to vote early.

So it's a competition for who can grab the attention of members with announcements like these.

Not all have come with a huge amount of detail - would the school timetable change to accommodate Truss's post-qualification university admissions plans? What system would the NHS use to fine people?

These are all things each side say they'd work out in government.

With lots of new policies, both camps risk increasing pressure to call a general election and get a fresh mandate for them if elected.

For all the talk of new ideas too, whoever wins will have many tasks to finish. Not least, helping people with the cost of living as bills are set to soar again in the autumn.

Mr Sunak and Ms Truss are vying for No 10 after reaching the final stage of the Conservative party leadership contest.

The party's membership will decide who will replace Boris Johnson, with the winner being announced on 5 September.

During the contest, there have been noticeable clashes between the two candidates as they set out their rival visions for the UK's future.

Earlier this month, they set out their plans for the economy and traded barbs over one another's policies.

Ms Truss is ahead of Mr Sunak in the race to become the next Tory leader, according to polls of party members.

And despite her apparent popularity among Tory members, Ms Truss told the Sunday Times that she is unsure if her parents would vote for her in a general election.

"I think my mum will, I'm not sure about my dad," she said, adding that they disagreed with her about public spending and tax.