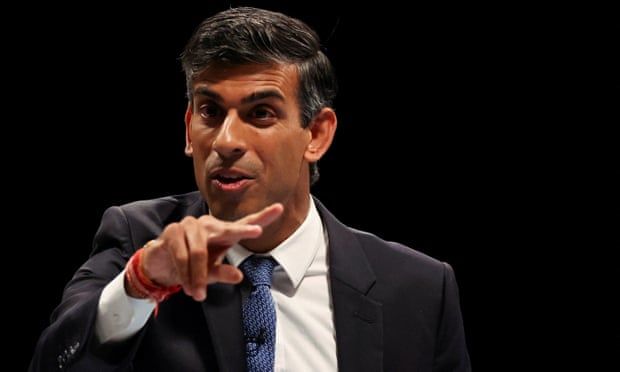 Former chancellor admits if were defeated he would back emergency budget put forward by rival Truss
Rishi Sunak has hinted he would vote for tax cuts proposed by his rival in the Tory leadership race, Liz Truss, despite previously branding them a “moral failure”.

The former chancellor has been fiercely critical of Truss’s economic strategy, but on Thursday appeared to soften his stance by admitting that if were defeated he would back an emergency budget put forward by her.

Though he tried to play down the widespread expectation that Truss is likely to be announced as prime minister in just over 10 days, Sunak said he would continue to support the Conservative party and vowed to stay in politics regardless of how he fares in the contest.

On Wednesday, Sunak declined to say whether he would vote for any kind of fiscal package put together by an incoming Truss administration, while earlier this week he appeared to suggest he would decline any offer to serve in her cabinet.

But Sunak has argued these would only fuel inflation and prolong the economic hardship faced by millions of people as the cost of living crisis intensifies, warning it would be a “moral failure” if vulnerable people were not protected.

In a marked softening in tone, Sunak appeared less hostile when quizzed on whether he would support Truss’s economic plans on Thursday. “Of course, I’d always support a Conservative government. Of course, I would, it goes without saying,” he told BBC Radio 4’s World at One programme.

Sunak insisted he would “absolutely not” leave parliament if he lost the Tory leadership race, as polls of Conservative members show is highly likely. “There’s still weeks to run in this campaign, and that’s why I’m continuing to give it everything I’ve got,” he said.

Defending her economic plans in the run-up to the penultimate hustings with members in Norfolk on Thursday night, Truss said: “I’m very clear that what we should not be doing is taking money from people in taxes and then giving it back to them in benefits.”
Add Comment