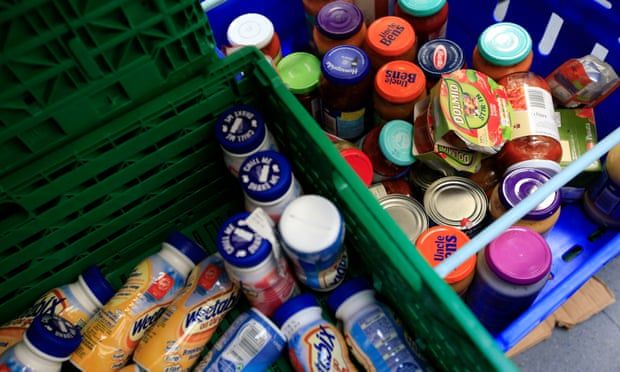 For the increasing number of people who use my food bank, the future is looking bleak, says Corrine Boden, operations manager at Stoke-on-Trent food bank
I run a food bank in Stoke-on-Trent, and the people who come in are telling me that they’re scared.

It’s a terrible combination of many things – the fuel crisis, the cut to universal credit, the rise in price of food and essentials, bills and rents, and the fact that benefits have not reflected the actual cost of living in this country for a long time. In Stoke-on-Trent almost half of children are living in poverty. How are people going to cope as this gets worse?

A woman in her 40s came to see me recently. She lives alone, is teaching and has two other jobs besides, yet she does not have enough money to buy food for herself. She asked me: “How will I get through this?” People are beside themselves about what the next six months will bring because we all know this is going to get so much harder – and it has already been hard for many years.

Rishi Sunak’s spring statement promised to mitigate the cost-of-living crisis, but what he has announced won’t make the difference people coming to us need. A cut in fuel duty and raising the national insurance threshold will never be enough to cancel out rocketing heating bills.

People are already telling us they can’t afford to put on the heating. Money Saving Expert’s Martin Lewis is now saying he’s got no tools left to help people stretch their money any further. This is not a case of people not “budgeting properly” – it’s a crisis. We are seeing a whole new group of people coming to us now – people in full-time work who do not have enough money to pay their rent and bills and buy food.

We do all we can at our food bank – we have advisers who try to help people access the benefits they are entitled to, and we have a local partnership with Money Matters that supports people with debt issues and energy advice. Unfortunately, debt is for most the only way through now. As research by the Trussell Trust found recently, two in five British people claiming universal credit are in debt. Many have maxed out credit cards just to get by and are changing their cards every six months to avoid the most punitive interest rates. And this is before something happens such as needing to buy a school uniform, or, worse, the boiler or fridge breaking.

Our fear is that come September there will be a wheat shortage because of the situation in Ukraine. Will loaves of bread reach £5? How much will pasta cost? Over the past few years we have already seen a huge increase in food prices and people are already skipping meals. The same Trussell Trust survey found that one in three people on universal credit didn’t eat at all or had only one meal on more than one day in the previous month. This does not surprise me.

We are so grateful for the donations we get and would like to say a huge thank you to everyone who donates. My concern, however, is that donations will decrease as food becomes more expensive. We have already seen donations slowing – if that continues, where will food parcels materialise from?

Fourteen thousand people have visited our food bank in the past 12 months, and we are expecting this number to dramatically increase. We really need the government’s help – we need our benefits payments to be fair and to reflect the true rate of inflation and for policies to work from citizen level upwards. Benefits levels have not increased fairly for so long that people are working and getting top-up benefits and it still doesn’t cover rent and bills. Local welfare assistance has been chipped away for years – we’ve gone backwards.

Social security measures such as universal credit should be protecting people from debt and food banks – not pushing them towards them. The government must strengthen our social security system so it protects us all from harm and no one needs to use a food bank to get by.
Add Comment