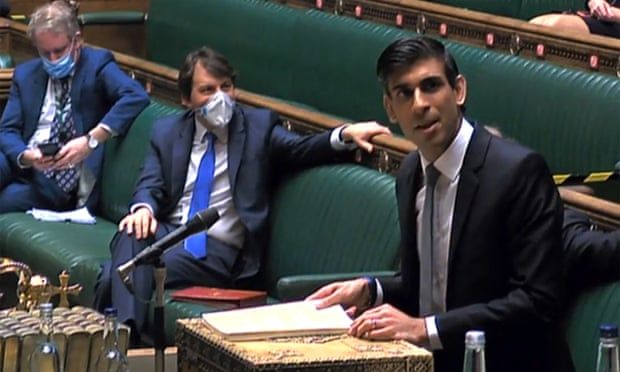 Rishi Sunak digs in for battle against financial cost of Covid

Analysis: chancellor’s budget sticks with military theme as final reckoning of virus’s impact remains some way off
A last push for victory. Wartime metaphors have abounded since the start of the Covid-19 pandemic and Rishi Sunak stuck closely to the martial theme in his second budget. The government would use the “full fiscal firepower” of the state to defeat the invisible enemy, he said.

Comparisons with previous conflicts are appropriate if not always flattering. The government’s complacency and lack of preparation a year ago was a throwback to the Boer war. There were times when the damning judgment of the generals sending men to their deaths on the western front – lions led by donkeys – has seemed apposite.

And, of course, there have been similarities with the second world war: the initial setbacks, the harnessing of science, the record peacetime borrowing, the “whatever it takes” mentality that has reduced the chancellor of the exchequer to the man who simply writes the cheques. Forget the freezing of personal tax allowances and the big jump in corporation tax, which are both post-dated. The package of measures the chancellor announced will inject £65bn into the economy, mostly in the next financial year. This was a giveaway package – and a big one at that.

There was an extension to the furlough until the end of September. An additional 600,000 self-employed workers will receive grants to cover loss of earnings. The business rates holiday will continue, while the hospitality, leisure and tourism sectors will pay a lower rate of VAT for another year. That measure alone costs the exchequer £5bn.

Over the past 12 months Sunak has appeared 15 times on the Covid-19 battlefield and each engagement has involved him spending more money. In truth, he has had no choice. Failure to increase spending on the NHS would have led to even more deaths. The alternative to wage subsidies, business support and the patching up of an inadequate welfare safety net would have been economic Armageddon. Unsurprisingly, he has the highest approval ratings of any chancellor in recent decades and is comfortably the most popular member of the cabinet with the public. He has made mistakes but gone unpunished for them.

What is more, the £352bn Treasury stimulus has – despite the wastage and the fraud – been money well spent. A year ago, there were fears the unemployment rate would shoot up to 1930s levels as a result of the enforced closure of much the economy. The latest forecast from the independent Office for Budget Responsibility put the peak in joblessness at 6.5%, down from 7.5% three months ago, and half the level that might have been expected given the economy has contracted by 11% in a year.

Throughout the crisis Sunak has talked tough about the eventual need to get to grips with the deficit. Until now, though, the only similarity between him and Sir Stafford Cripps – the original austerity chancellor – has been their teetotalism.

But here were the first signs of Sunak unleashing his inner Cripps. Corporation tax is to rise from 19% to 25% for bigger companies in one hit in 2023, with the personal allowance and the higher rate threshold frozen for four years from April 2022.

Business was prepared to pay more corporation tax but expected the increase to be incremental and capped at 23%. As one business leader noted, the idea that the government is planning a post-Brexit, low-tax Singapore-on-Thames looks misplaced.

But Sunak will be hoping his investment incentives – especially the 130% super-deduction for the next two years – leads to stronger, less consumer-dependent growth and a more rapid reduction in the budget deficit than the Office for Budget Responsibility (OBR) is forecasting.

That would certainly be welcome. Without the attempts to boost the supply-side capacity of the economy, there is clearly the risk that the recovery will be almost entirely the result of individuals going on a massive spending binge once restrictions are lifted. The Treasury accepts that much of the investment that will take place in the next two years will be brought forward from the future to take advantage of the generous tax break but says there will be some additional capital spending totalling £10bn by the middle of the decade. Even assuming Sunak is right, that is still relatively small beer in the context of a £2tn-plus economy.

The OBR is clearly not expecting any dramatic improvement in the economy’s underlying performance. The economy is expected to grow by 4% this year and by more than 7% in 2022, but this is simply the result of making up the ground lost over the past 12 months. In 2023 – the year when the corporation tax increase kicks in – growth reverts to its trend of just over 1.5% a year.

There are those who think the economy may perform a bit better than that. Gerard Lyons, who was Boris Johnson’s chief economic adviser when the prime minister was mayor of London, said: “I expect the economy to recover strongly over the next two years and today’s investment super-deductor will give investment a further boost. As growth rebounds the deficit numbers will improve and the chancellor may decide then not to raise corporation tax so far.”

The thought that he may be able to reverse some of Wednesday’s tax increases will have occurred to Sunak too. This was a budget partly about winning a war. It was also a budget with one eye firmly on winning the election after pandemic victory is assured.
#COVID-19  #Covid  #Boris Johnson
Add Comment