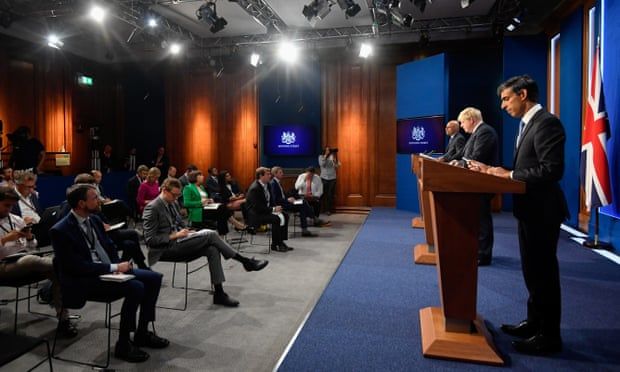 Ministers lobby chancellor for their departments before announcement of £140bn in extra spending
Rishi Sunak has given the date of 27 October for his autumn budget, announcing plans to support public services and revive the economy with £140bn of extra spending.

Setting the scene for more expansive and interventionist policies than seen under recent Conservative administrations, the chancellor said he wanted to balance extra cash for public services with “keeping the public finances on a sustainable path”.

Paul Johnson, the head of the Institute for Fiscal Studies, said he welcomed “a return to multi-year budgeting”. However, it was unlikely the autumn budget would match the impact of announcements on Tuesday to reform social care and boost health spending with tax rises to raise £14bn, he said.

Cabinet ministers have already spent several weeks preparing to battle with Sunak over their future budgets, ahead of his official announcement of a three-year spending review, which will also fall on 27 October.

Some departments have seen their budgets cut by up to 40% over the past decade, and the fear inside Whitehall is that previously “ringfenced” areas of health, schools and defence will take the lion’s share of any extra cash – leaving little for justice, transport and international aid.

Public service spending will now increase at an average real rate of 3.2% a year over the next three years, compared with a 2.1% rise under previous plans.

“That will fund a substantial increase in health and social care funding, but will still leave overall public service spending £2bn to £3bn lower each year than what the government was planning to spend pre-pandemic,” Johnson said.

Sunak is understood to be confident that a £20-a-week cut to universal credit payments next month and the ending of the furlough scheme on 30 September will have little impact on the economic outlook.

Some economic forecasters have warned that unemployment could rise from 4.7% to above 5% later this year as furloughed workers find themselves out of work.

There had been speculation that the budget would be delayed until next year, allowing the economy to return to pre-pandemic levels of activity before setting tax and spending targets each year until 2024.

Some Treasury officials were concerned that the government’s economic forecaster, the Office for Budget Responsibility (OBR), was unlikely to agree with a forecast by the Bank of England that the pandemic had made only a modest dent in the long-term outlook for the economy, forcing Sunak to limit his spending plans.

It is understood that the OBR is preparing to admit it was overly gloomy in its forecasts in March when it said the hit to the economy was the equivalent of 3% of annual GDP. Later assessments by officials at the BoE have reduced the pandemic’s negative effect to just 1% of GDP.
#Johnson
Add Comment