Tory leadership rivals Rishi Sunak and Liz Truss have set out competing plans to deal with the economic recession forecast by the Bank of England in their latest TV clash.

But Ms Truss said a recession was "not inevitable" if "bold" action was taken.

The Bank's gloomy forecast of a recession this year loomed large in the TV special, hosted by Sky News.

It earlier raised interest rates to the highest level in almost three decades, from 1.25% to 1.75%, in an attempt to push back skyrocketing prices.

The inflation rate is forecast to hit a 42-year high of 13% this year, while the UK economy is expected to shrink for more than a year.

The Bank said the main reason for high inflation and low growth is rising energy bills, driven by Russia's invasion of Ukraine.

The worsening state of the UK economy has dominated the Tory leadership campaign, with both candidates putting forward rival visions to deal with the fallout.

Mr Sunak, who has trailed Ms Truss in recent polls, has repeatedly said he would prioritise bringing inflation down before cutting taxes, if he became prime minister.

Meanwhile, Ms Truss has pledged a package of tax cuts worth £30bn soon after she enters office, which Mr Sunak has argued would increase inflation and the cost of borrowing.

Mr Sunak told the Sky News programme: "We in the Conservative Party need to get real and fast - because the lights on the economy are flashing red and the root cause is inflation.

Ms Truss reiterated her pledge to immediately reverse April's increase in National Insurance and cut other taxes, which she claimed would stimulate economic growth and prevent a recession.

"What the Bank of England have said... is of course extremely worrying, but it is not inevitable," she said.

"We can change the outcome and we can make it more likely that the economy grows."

While the governor of the Bank of England gave a sombre press conference, the candidates to be the next prime minister were preparing for their next turn in a TV studio.

The two candidates - once again - took the chance to have a pop at each other's economic plans.

It is territory the two have clashed over before, but while the wannabe PMs keep exchanging blows on the finer points of fiscal policy, there will be many worried families and businesses simply wondering whether the help on offer will be anywhere near enough - or what more may come.

The pair are vying to win over Conservative Party members, whose votes will determine which of them will become the next Tory leader and prime minister.

The party's roughly 160,000 members started receiving ballot papers on Monday, with the result due on 5 September, when Prime Minister Boris Johnson will leave office.

Despite trailing in many polls of members, there may be solace for Mr Sunak who appeared to win the most support among the Sky News audience members in a show of hands.

The programme saw an audience made up of Conservative members grill them about their programmes for government on a range of issues, including NHS funding, immigration and climate change. 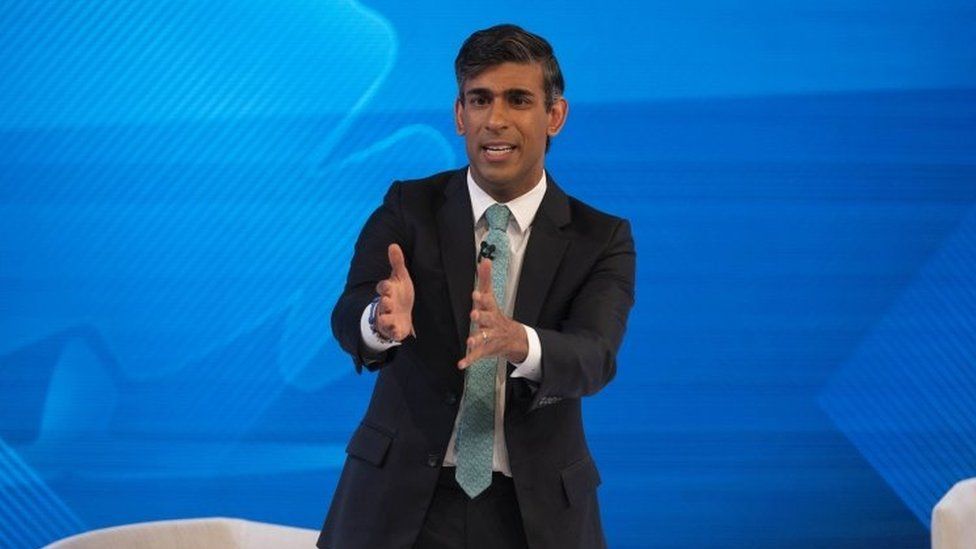 In one testy exchange, Ms Truss disagreed with an audience member who expressed concerns about the debt that would be incurred by the foreign secretary's tax plans.

Ms Truss said in response that "trying to balance the books prematurely is actually counterproductive" and growing the economy was more important.

Asked if she was happy with the answer, the Conservative member said she was not.

She told Ms Truss that what former Tory prime minister Margaret Thatcher "believed in was sound money", adding "this is not sound economics". 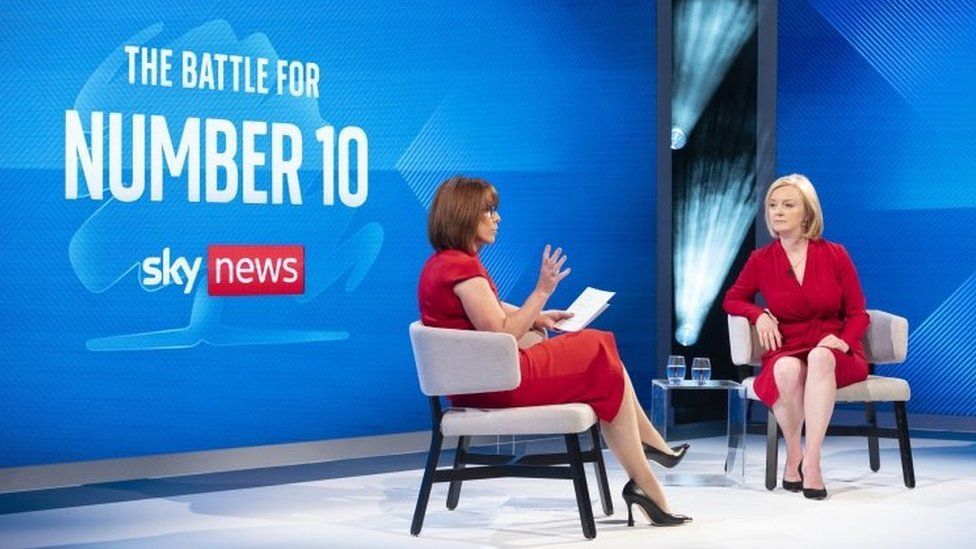 Ms Truss was also put on the backfoot by programme host Kay Burley, who repeatedly asked the foreign secretary if her now-scrapped proposal to link public sector pay to local living costs was "a mistake".

But Ms Truss resisted such an admission, and instead insisted her regional pay policy was "misrepresented by various people".

At times, Mr Sunak looked uncomfortable when pressed by Ms Burley, too. She asked how he felt about so many former cabinet colleagues - including Nadhim Zahawi, Ben Wallace and Sajid Javid - backing Ms Truss's campaign and not his.

"Plenty of people who have sat around the cabinet table also support me," Mr Sunak said, highlighting Deputy Prime Minister Dominic Raab as one of his supporters.

On whether there was nothing he could do about a recession, Mr Sunak said: "Of course, there is, of course."

He said Ms Truss was wrong to suggest the tax burden was causing the recession, pointing instead to inflation.

In other parts of the TV programme, Ms Truss:

*  insisted she has nothing to hide, telling the audience "there are no skeletons in my closet"

*  defended an old video where he claimed not to have any working-class friends, saying "we all say silly things when we are younger"

"The two continuity candidates have no answers to sky-high inflation, rocketing energy bills and the lengthy recession the Bank of England has warned is on the horizon," he said.

WATCH: The Battle for Number 10 - Moments from the Sky News special